Rights on the Line is produced by Front Line Defenders, and presents the voices, perspectives and experiences of human rights defenders (HRDs) at risk and focusing on human rights issues across the globe.

Listen to Rights on the Line episodes any of these channels: 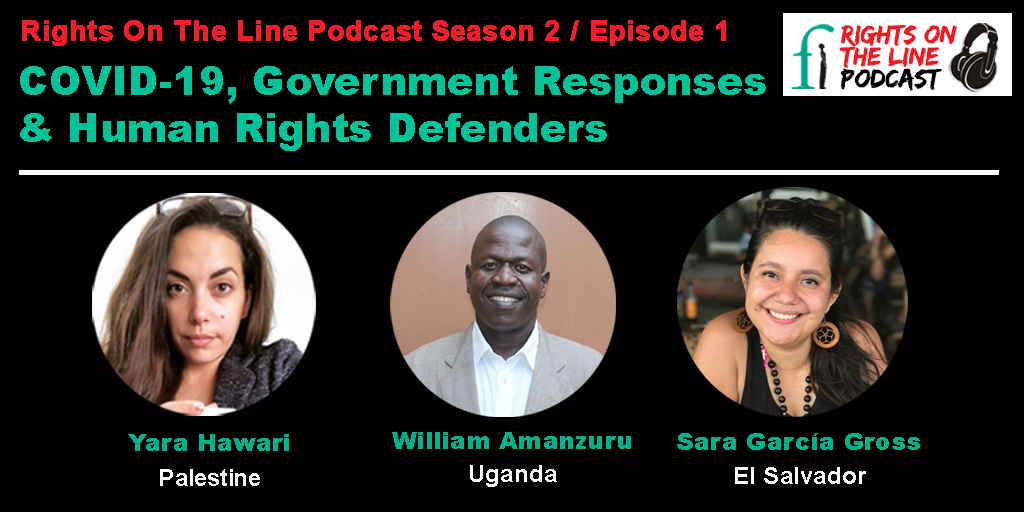 As the COVID-19 pandemic spreads across the globe, and communities seek to protect themselves however they can, governments are being challenged to respond. While the vast majority of governments have not done well in initial responses, some have been transparent, direct and engaged with their citizens – and the global community. Others, particularly those with authoritarian features or tendencies, are engaged in responding to the crisis that puts political and economic interests out front, crafting policy and decree accordingly. The declaration of emergency rule in too many countries only solidifies what was already there in practice, and leaves many people scared not only of the virus itself, but what may come next when life returns to what we now call normal.

Human rights defenders are responding to these challenges, as they always do – by working hard, reaching out to their communities, identifying those who are struggling or are in need or who have been left out, and trying to help. They are calling out government abuse and excess and finding new ways to communicate with each other and the outside world to challenge power.

Today, Front Line Defenders relaunches its ‘Rights on the Line’ podcast, to offer another platform for the voices, perspectives and experiences of human rights defenders at risk and leading struggles for the health, wellbeing and rights of their communities.

In this episode, Front Line Defenders speaks to feminist activist Yara Hawari from Palestine about the consequences of the pandemic for a population under military occupation. Then we discuss government response in the context of the environment in Uganda with the founder of Friends of Zoka, William Amenzuru. Finally, we hear from Sara García Gross from El Salvador, a leading women’s rights defender about the government’s response in the context of its dark past, the rampant violence against women in the country and the current dispute between the President and the opposition. 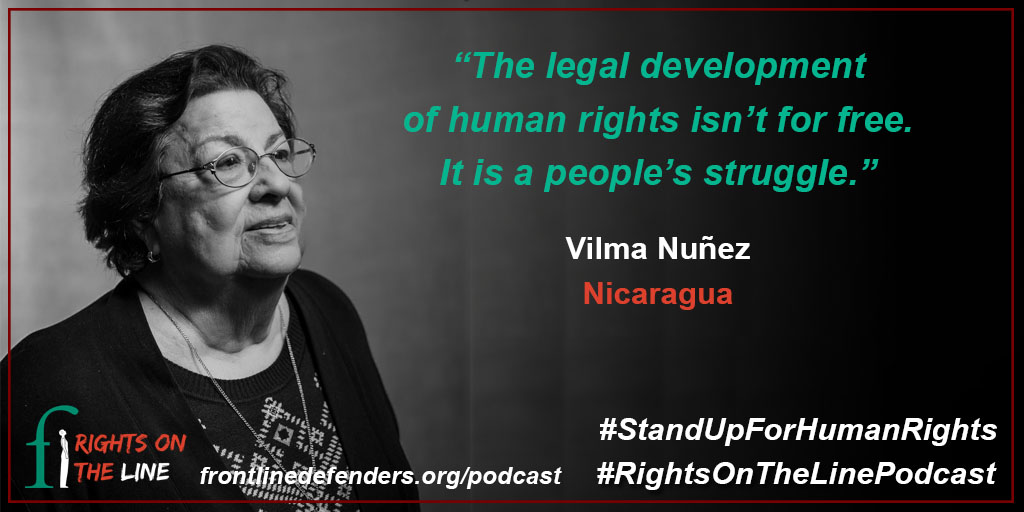 #UDHR70: Reflecting on the UN Declaration for Human Rights Defenders

In this final episode in Season 1, listen to hear HRDs reflect firsthand on the importance of - and limitations of - UN Declarations on the 70th anniversary of the UN Declaration on #HumanRights and in the 20th year of the Declaration on #HumanRightsDefenders. Hear from Maria Munir of the United Kingdom, Omar Faruk Osman of Somalia and an excerpt of Vilma Nuñez, of the Nicaraguan Centre for Human Rights contribution to the opening plenary at the 2018 HRD World Summit in Paris in October. 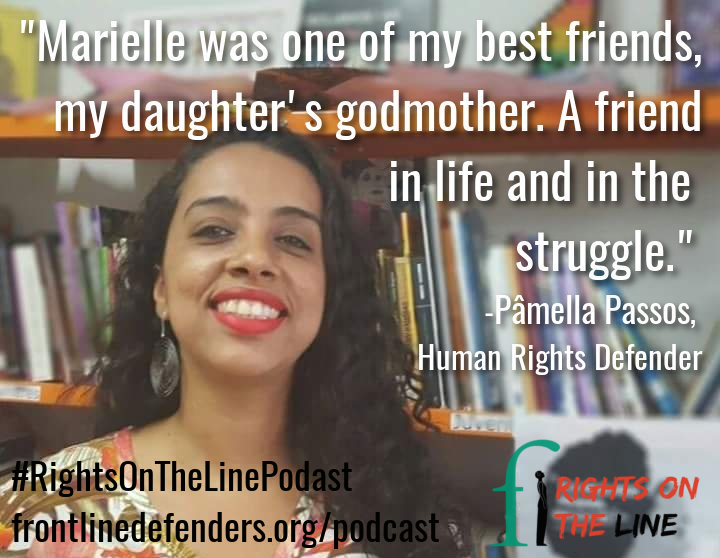 Interview with an HRD: Pâmella Passos

Brazilian human rights defender Pâmella Passos. Pâmella spent six weeks in Dublin as part of Front Line Defenders’ Rest and Respite program earlier this summer, just months after the death of her friend and well-known human rights defender and councilwoman Marielle Franco, who was murdered in Rio de Janeiro in on the 14th of March. 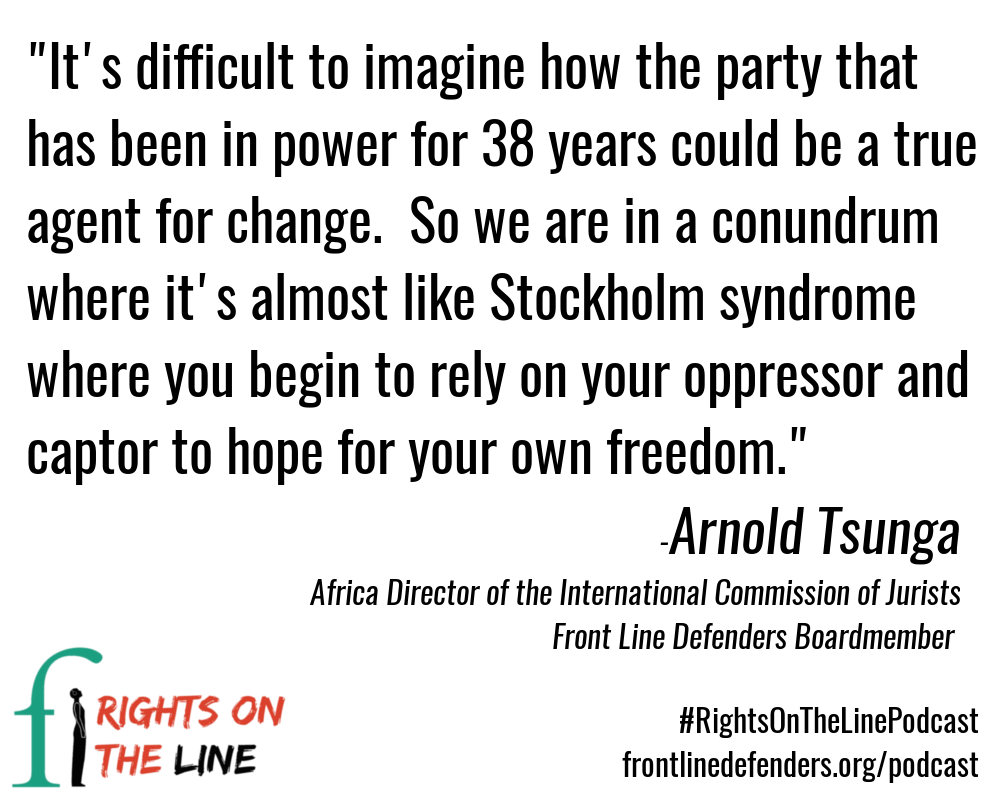 On this episode we talk about elections and how they can impact human rights defenders. By looking at some of the federal elections that have taken place this year, we’ll be able to see the different and nuanced ways political changes at the national level can impact the situation for those fighting for human rights in that country. Over the next half hour we’ll be moving region to region across the globe to discuss recent elections in Mexico, Zimbabwe, Pakistan and Cambodia. 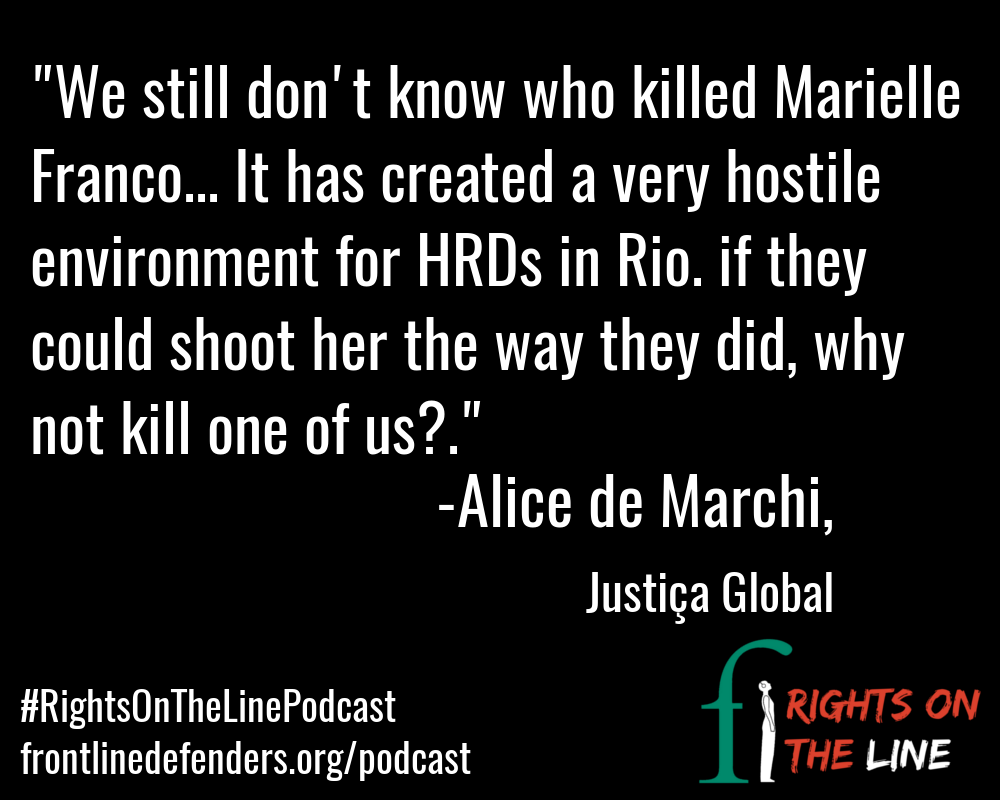 #StopTheKillings The targeting of HRDS

On 20 June, at an event alongside the United Nations Human Rights Council meeting in Geneva, Front Line Defenders released a report on the killings of HRDs wordlwide. Focusing on the six countries with the highest number of killings, and by that we mean targeted attacks, assassinations, extrajudicial killing by the state or authorities. To bring you additional insight into this issue, Rights on the Line spoke to human rights defenders from Mexico, the Philippines and Brazil, three of the six countries profiled in the report. In this episode we hear from: 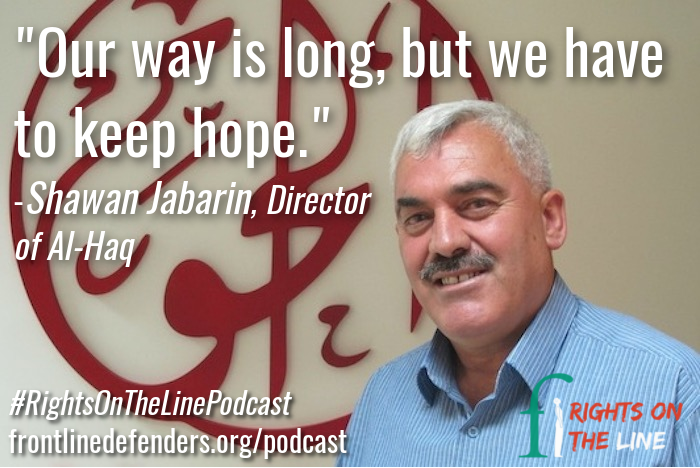 #LandRights #Self-Determination While in town to meet with legislators on the potential Occupied Territories Bill, Palestinian human rights defender Shawan Jabarin sat down with Rights on the Line to discuss his work defending human rights in Palestine as well as responsibility of the international community to intervene and advocate on behalf of those subject to actions that violate international human rights law. 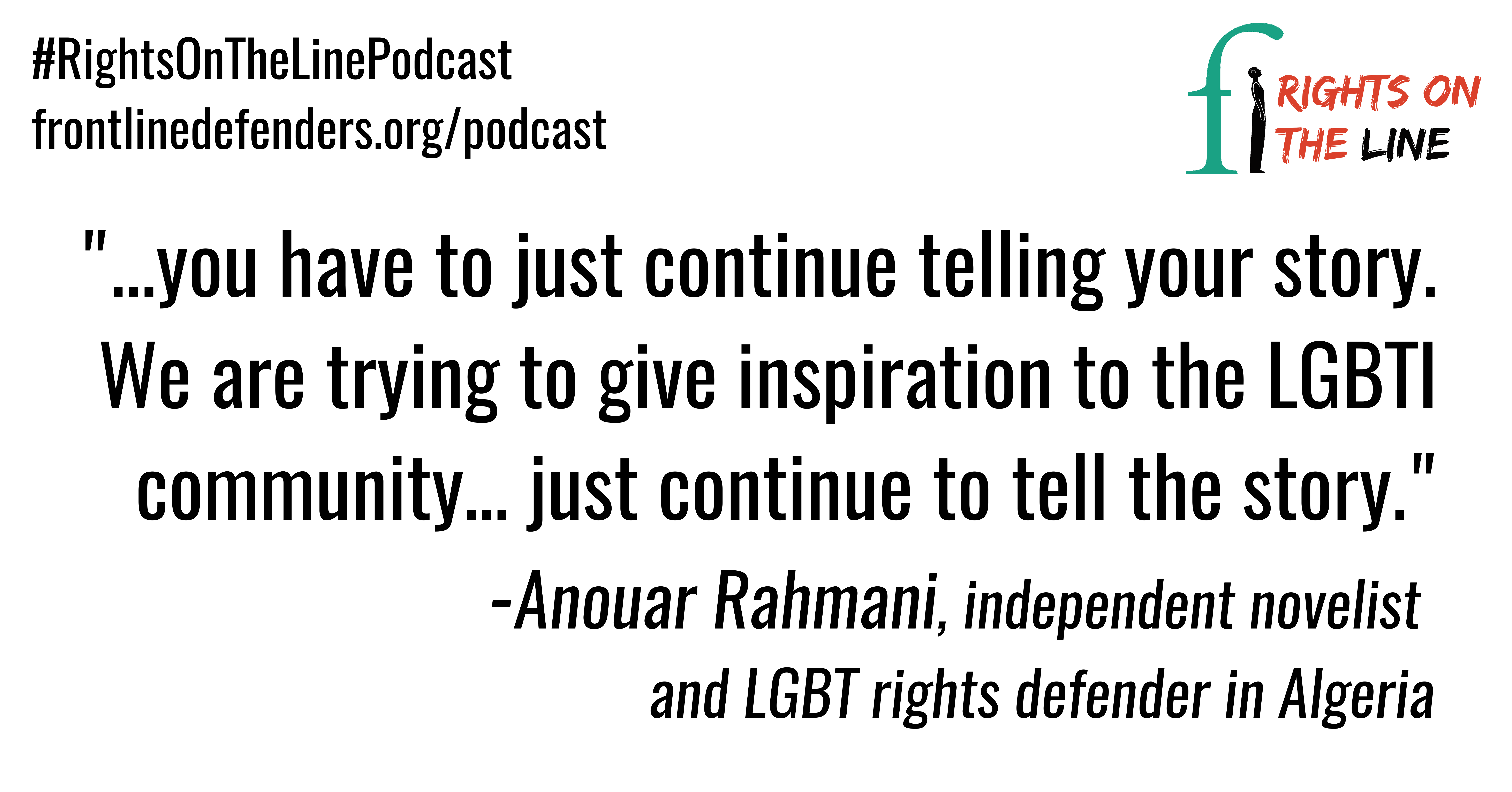 #LGBT Rights On the International Day Against Homophobia, Biphobia and Transphobia, Rights on the Line brings you three interviews with three LGBTI rights defenders. Listen to hear them speak about the work they do, the consequences they face for their advocacy and the unique challenges LGBTI defenders face within the human rights movement. Tune in to hear from: 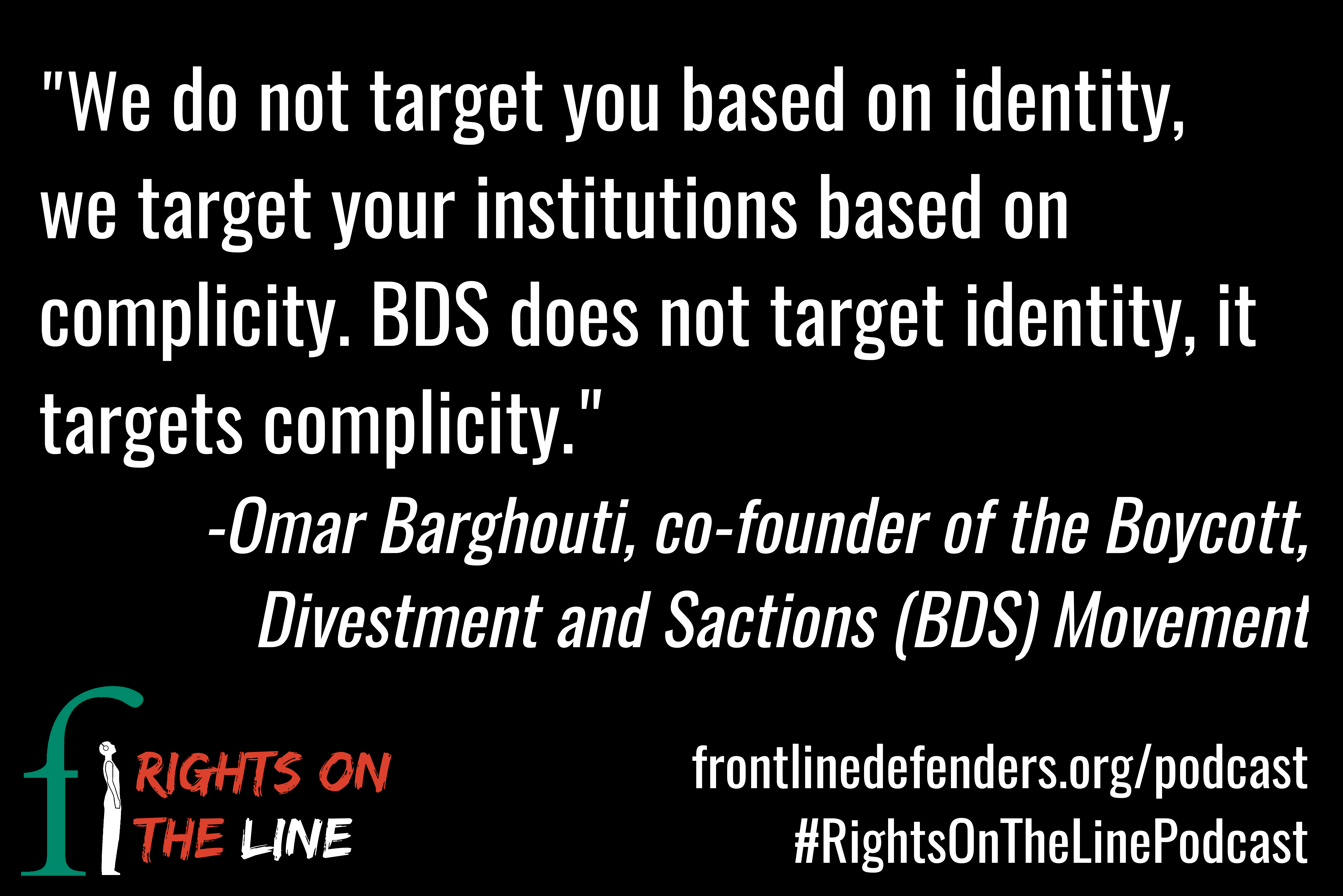 On the 70th anniversary of the creation of the state of Israel, known as al Nakba, or the catastrophe, as it resulted in the displacement of hundreds of thousands of Palestinian people. Today marks 70 years of the existence of this state and it’s apartheid regime that routinely violates the human rights of Palestinian people, international law and United Nations conventions. To mark this day, Rights on the Line brings you three interviews with advocates of human rights in Palestine. Tune in to hear from:

Sahar Francis, the Director of Adammeer, a prisoner’s rights organization
Jamal Juma, Coordinator of the Stop the Wall campaign
Omar Barghouti, the co-founder of the Boycott, Divestment and Sanctions movement

On this episode of Rights on the Line, we discussed some of the risks faced by environmental rights defenders advocating against large-scale development projects, the role international investors can play in protecting human rights and the role of international and local legislation in protecting Indigenous land claims in the face of environmentally destructive 'mega-projects'. 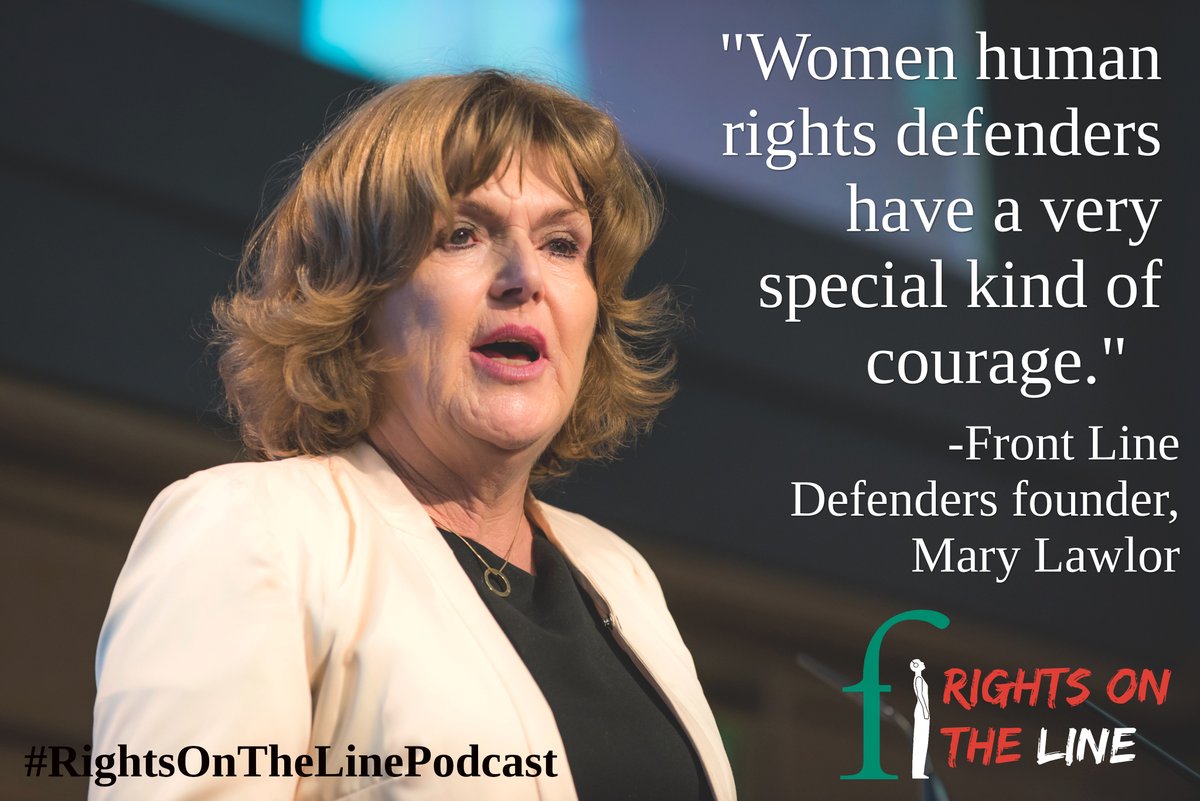 For International Women’s Day, Rights on the Line is handing the mic over to a few of many WHRDs who work every day of the year for their own rights and the rights of their communities. Tune in to hear these WHRDs speak about their work as human rights defenders:

8th March is #InternationalWomensDay, but these women are advocating for human rights all year round. Listen to hear about their work and the human rights violations their communites are facing. 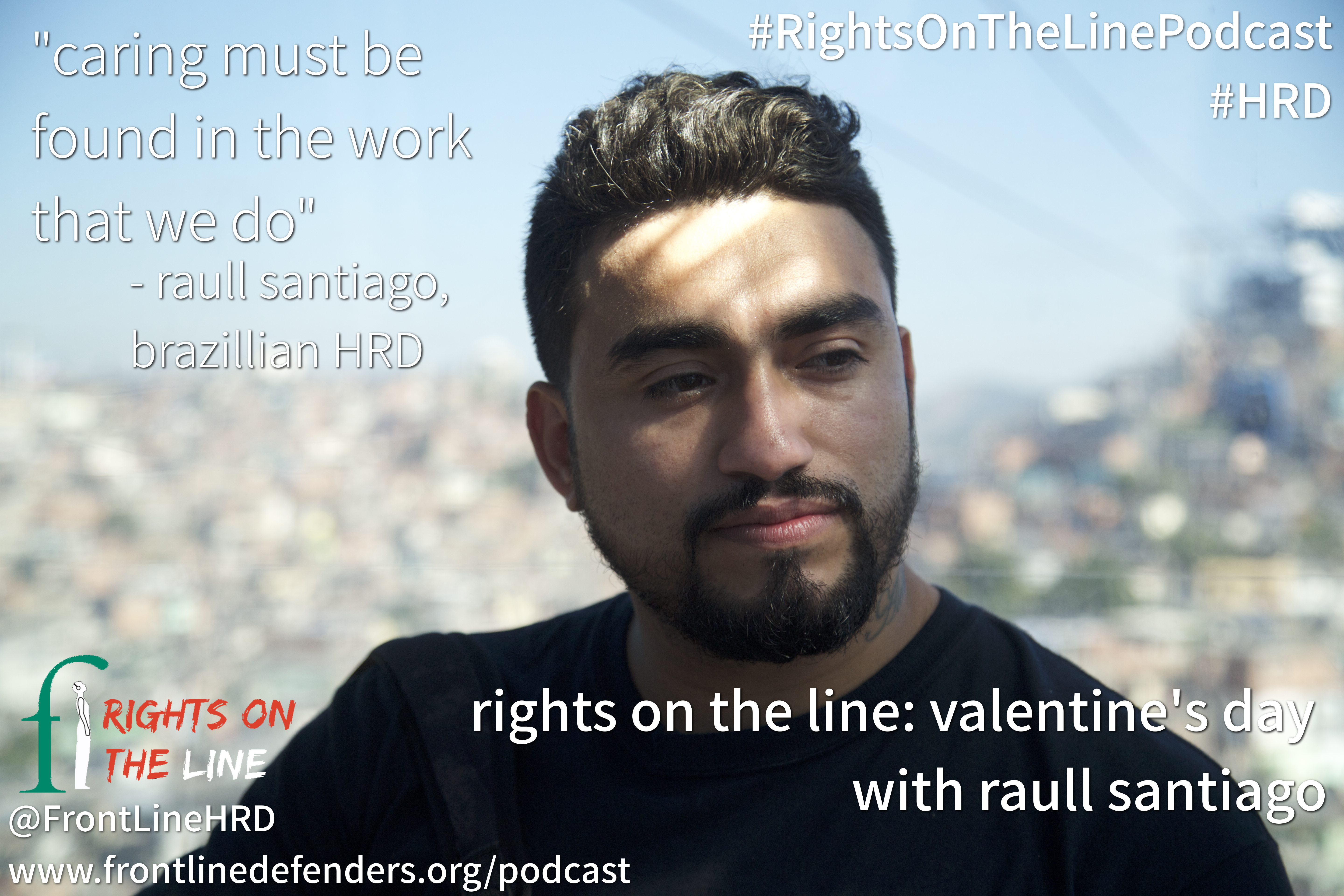 Valentine’s Day. Self Care. Duty of Care. Human rights. How do these these connect? Listen to the debut episode of Rights on the Line, produced by Front Line Defenders, to hear about award-winning Brazilian human rights defender Raull Santiago’s work in Rio de Janeiro’s favelas, how it impacts his family life and his experience on Front Line Defenders Rest & Respite program.

Raull Santiago is a human rights defender from Rio de Janeiro, Brazil. In March 2014, he co-founded the collective Papo Reto (Straight Talk), a group of citizen journalists documenting life in the Complexo do Alemão favela. The group draws attention to what is happening in Alemão, highlighting the cases of police violence and other human rights abuses, which tend to be ignored by mainstream media. Their slogan is: Nós por Nós (Us for Us), as the content they share is produced by residents living in the favela and dedicated to them.