Today, with a unanimous vote, the judges of the Supreme Court of Justice (SCJN), ordered the absolute and immediate release of human rights defenders José Antonio and José Luis, members of the Indigenous Citizen Council of Nahuatzen (Consejo Ciudadano Indígena de Nahuatzen-CCIN) and inhabitants of Nahuatzen, the petition by Minister Jorge Mario Pardo Rebolledo was endorsed,

Both human rights defenders were deprived of their liberty for over 3 years, in reprisal for having expelled political parties from their community, Nahuatzen, in the Purepecha plateau in Michoacán.

We welcome the fact that the Minister's petition was based on an intercultural approach within a framework of human rights protection. This is an important precedent that this case represents for indigenous communities in our country.

Today in the plenary session of the First Chamber of the Supreme Court of Justice, the ministers of this body granted petition of Minister Jorge Mario Pardo Rebolledo that revokes the sentence and orders the absolute and immediate release of José Antonio Arreola Jiménez and José Luis Jiménez Meza, members of the Indigenous Citizen Council of Nahuatzen (CCIN) and residents of this same community.

Civil society organisations celebrate this decision after having accompanied the case of teh HRDs for over three years, and after documenting multiple violations of their rights during the process.

The petition was approved by a unanimous vote in favour, which also calls for the need to investigate the acts of torture and ill-treatment of José Antonio and José Luis in an independent, impartial and meticulous manner, in order to guarantee the fulfilment of the obligations of the State of Michoacán in terms of human rights protection.

As civil society organisations, we stress the importance that all future cases follow this precedent, that is based on an intercultural approach, and highlights that all criminal proceedings involving an indigenous person have the right to, among other things, enjoy the recognition of cultural diversity and to be protected by rights such as self-determination, self-government, the application of their own self-regulatory systems, to land, territory and natural resources, and to full access to the jurisdiction of the State.

The verdict of the highest court represents an important precedent for all indigenous communities in Mexico who, like José Antonio and José Luis, face criminalisation, persecution, violence and displacement due to their exercise of their rights as indigenous communities. Congratulations to these HRDs, whom we will continue to accompany in their struggle for a Free Nahuatzen. 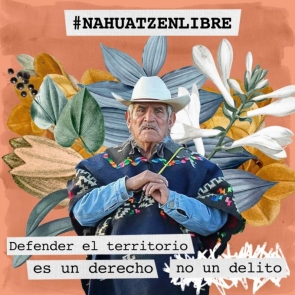