The intensification of smear campaigns, defamation and criminalisation against Maya Q’eqchi’ women human right defenders in the northeast of Guatemala occurs within the unequal, violent and oppressive historical context in which indigenous and Afro descendant women find themselves. This group of women now face even more challenges due to the current complex political context, the COVID-19 pandemic and the humanitarian aftermath of both hurricanes ETA and IOTA, which devastated many communities in Guatemala. The State’s willingness to abuse the state of emergency, and to target human rights defenders under the guise of the COVID-19 pandemic, organised crime and drug trafficking has increased the climate of tension and attacks against women human rights defenders, especially those defending their communities rights to land.

Tzk´at; La Red de Sanadoras Ancestrales del Feminismo Comunitario Territorial desde Iximulew- Guatemala (Network of Ancestral Healers of Territorial Community Feminism from Iximulew- Guatemala) is an indigenous and women's human rights organisation that provides fundamental support to maintain and strengthen the resistance of indigenous women and indigenous peoples in Guatemala. The organisation has denounced the constant stigmatisation, criminalisation, and political prosecution it faces, as well as the surveillance it is under by State agencies, corrupt officials, landowners and oligarchic families in the territory. These attacks, threats, criminalisation and prosecution have had a profound impact on the psycho-social security of its members, as well as their physical, emotional and spiritual health.

Since June 2020 the Maya Q’eqchi and Afro-descendant women human right defender Lourdes Gómez Willis has been the subject of repeated assaults. The perpetrators of these assaults reportedly include powerful actors from the palm sector in the region, who have targeted the woman human rights defender for her work in fostering community resistance against the human rights violations carried out by the palm industry. Members within her own community have also targeted her for denouncing sexism and institutional violence within local organisations. Since 5 December 2020 the security situation of Lourdes Gómez Willis has worsened; she faces legal action from private and governmental actors in reprisal for her involvement in supporting communities in need of humanitarian assistance as a result of the destruction caused by hurricanes Eta and Iota. The well-being of the woman human rights defender has been affected by the lack of protection and support provided to her by the State.

Maya Q’eqchi’-Jalan-Trans human right defenders that work in the municipality of San Pedro Carchá and surrounding areas have noticed significant reprisals for their human rights work in their communities, most notably in the form of harassment by unknown individuals on social media. The harassment they face is loaded with hate speech and linked to religious fundamentalism. The Maya Q’eqchi’-Jalan-Trans human right defenders have denounced this online hate speech, as well as the harassment they receive in response to their work supporting cases of criminalised human rights defenders, documenting cases of transfemicides in the region, monitoring the health of people with HIV in the context of the COVID-19 pandemic and providing support to impoverished and economically disadvantaged people and members of the LGBTIQ + community.

On 29 December 2020 the Maya Q’eqchi’ Jalan-Trans rights defender Roberta Pitán was assaulted by unknown individuals while trying to catch the bus that she routinely took home, approximately 20 minutes away from the Cobán Center in the community of Gualom. After the attack, Roberta Pitán was assisted by bystanders who provided support and first aid to the woman human rights defender who was unconscious as a result of the attack. She was later taken to the Regional Hospital of Cobán. The attack has already been denounced by the members of Tzk´at and the Public Ministry of Cobán have began an investigation into the attack.

On 11 January 2021, the Second Court of First Criminal Instance of Cobán confirmed a number of charges against woman human rights defender Delia Adelina Leal Mollinedo. The woman human rights defender, teacher and feminist from Cobán, Alta Verapaz promotes sexual and reproductive health to women from indigenous communities of the Q’eqchi’ y Poqomchi’ region of Guatemala. Since her arrest, Delia Adelina Leal Mollinedo has been the victim of smear campaigns and public stigmatisation in the media and social networks. Several departmental and national media outlets publicised her case, making misinterpretations with misogynist content and distorting the information and facts, which has only contributed to creating an atmosphere of misinformation and stigmatisation around the case and the improper processes directed by the Women’s Prosecutor’s Office of Cobán and the Public Ministry. 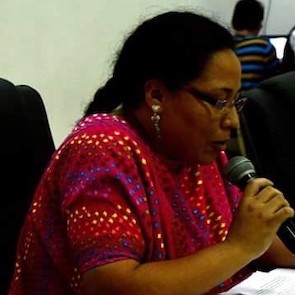