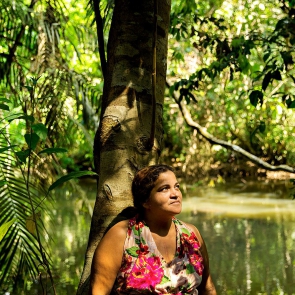 I work to benefit this community. I have fought in multiple instances to achieve a family-based sustainable use of the forest, to allow this forest to be a common good.

Osvalinda Maria Alves Pereira is a well recognised woman human rights defender from the state of Pará, in the Brazilian Amazon. She is the President of the Women's’ Association of the Areia Settlement Project and a local leadership at the Areia Settlement Project, in the municipality of Trairão, west of Pará. Due to her human rights work, she and her husband Daniel Alves Pereira have received constant death threats by illegal miners and cattle farmers since 2012.

The woman human rights defender’s goal was to empower the local population to grow food in their land plots, as a means to subsist without having to work for loggers, destroying the forest, in conditions that were similar to slavery. Osvalinda Maria Alves Pereira is seen as a threat to the interests of those who profit from environmental destruction.

“Nobody throws stones at an orange tree who does not grow fruits. If it is full of fruits, some people will throw stones at it to take down the oranges. I know I am this orange tree, and that is why they will continue to attack me”, says Osvalinda Maria Alves Pereira in an interview to Linha de Frente, a project by Front Line Defenders and other partner organisations.

The geographical position of the Areia Settlement Project makes it a gateway to three conservation units – which radicalises conflicts with loggers. Immediately around the settlement are the Trairão National Forest, the Riozinho do Anfrísio Extractive Reserve and the Jamanxim National Park. Loggers have began settling in that space, and using the access roads to give flow to the illegal forest wood they cut.

Over the last 20 years, about 280 families have been living and sustainably producing rice, beans, corn, sweet potatoes and other crops, without pesticides or harmful practices. The families are distributed around 20 thousand hectares. Osvalinda Maria Alves Pereira declares: “I work to benefit this community.” “As a farmer and President of the Women’s Association, I have fought in multiple instances to achieve a family-based sustainable use of the forest, to allow this forest to be a common good”.

However, over the past years, she and her husband have been deeply marked by all the threats and attacks against them. In 2018, two graves were built close to their homes with their names on it. After these incidents became the rule, they were forced to escape the village overnight, running from a number of hitmen that were placed in their way. Nowadays, Osvalinda Maria Alves Pereira and Daniel Alves Pereira remain internally displaced and hidden as a measure to protect their lives.

“We are not here to be killed with your bullets on our heads. I will seek justice” - Osvalinda Maria Alves Pereira.