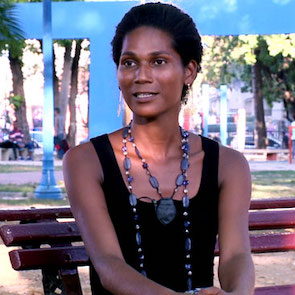 The price we pay cannot be hidden, it is in our body. It is the price that is visible in the streets, with the stares, in relationships when they don't want us and in the labour market, when they primarily consider our gender identity, instead of our qualifications.

Fernanda Falcão is a trans woman human rights defender, with a great experience working with the LGBTIQ+, transgender, sex workers in vulnerable situations and with the imprisoned people. She carries out actions to combat human trafficking and to prevent sexually transmitted diseases.

Fernanda is a nurse and has been part of several different initiatives, including the LGBT Centre of the Secretariat of Social Development of Recife city and the coordination of affirmative policies for transvestites, transsexuals and bisexuals at state level, being essential for the development and improvement of public policies focused on vulnerable communities.

In addition, Fernanda Falcão was the financial coordinator of Amotrans and one of the political articulators of RNTTHP (National Network of Transvestites, Transsexuals and Transmen living and coexisting with HIV and AIDS) and GTP+ (Posithive Prevention Working Group), the first NGO in the Northeast of Brazil to care for people living with HIV. She also works in 23 penitentiaries in the metropolitan region of Recife city, orienting prisoners about tuberculosis and was one of those responsible for creating the first specific pavilion for LGTBIQ+ prisoners, who are the biggest targets of torture and violence in prisons.

Because of her work defending LGBTIQ+ rights, sex workers and the imprisoned population, Fernanda is target of constant threats, attacks and intimidation. She has survived two killing attempts in 2017 and 2021.

Fernanda's life story is one of the pictures of the reality of the trans population in Brazil, the country with the highest number of killings of trans people in the world. According to data from ANTRA - National Association of Transvestites and Transsexuals - only in 2020, 175 transsexuals, transvestites and transgender were killed in Brazil, which is a number twice higher than the second ranked country.