About Younis Iqbal
Status:
Detained
About the situation

On 16 April 2018, Pakistani land rights defender Younis Iqbal was officially arrested after being in illegal detention for four days. 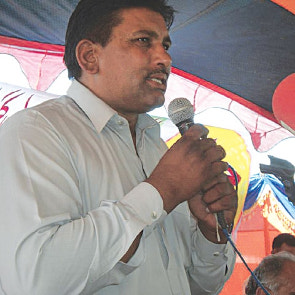 Younis Iqbal is the founder and chairman of Anjuman Muzareen Punjab (AMP), a long-standing movement that seeks to protect the land rights and welfare of landless peasants and small farmers in Pakistan’s Punjab province. Such disadvantaged communities have been tilling the land for centuries, but recent decades have seen the land being transferred to the military. AMP, which started out in 2000 by lobbying against unfair sharecropping arrangements, has been engaging with the provincial government over land ownership rights.

On 16 April 2018, Pakistani land rights defender Younis Iqbal was officially arrested after being in illegal detention for four days.

On 12 April 2018, Younis Iqbal was taken away by six plainclothes policemen as he tried to enter the Anti-Terrorism Court for his trial in the city of Sahiwal in Okara. He had been charged under the Anti-Terrorism Act of 1997 in April 2016 for having protested the illegal detention of farmers in Okara district. The human rights defender was taken to an unknown location where he was kept in illegal detention for four days before officially being arrested on 16 April.

On the same day, Younis Iqbal’s father was threatened when he went to the police station to inquire about his son’s whereabouts. The following day, the family filed a petition in the Sessions Court of Okara district against the short-term enforced disappearance of the human rights defender.

On 16 April, Younis Iqbal was officially arrested and has been remanded in custody for fifteen days. He was arrested under multiple sections of Pakistan Penal Code, Maintenance of Public Order Punjab (MPO Act, 1960), and Anti-Terrorism Act 1997, which include the trumped-up charges of “attempted murder, obstructing a public servant in carrying out their duties, rioting while in possession of a deadly weapon”.

1. Immediately drop all charges against human rights defender Younis Iqbal, which are believed to be solely as a result of his legitimate and peaceful work in defense of human rights;

3. Guarantee that human rights defenders in Pakistan are able to carry out their legitimate human rights activities without fear of reprisals and free of all restrictions including judicial harassment and enforced disappearance.