About MASUM
Status:
Targetted
About the situation

Kirity Roy and three other human rights defenders of Banglar Manabadhikar Suraksha Mancha (MASUM), Ramen Moitra, Subhrangshu Bhaduri, and Sujoy Singh Roy, were detained, threatened, and verbally and physically abused by the Border Security Force (BSF) officers on 2 February 2019. They are facing a false complaint from the BSF and are at risk of arrest and legal harassment. 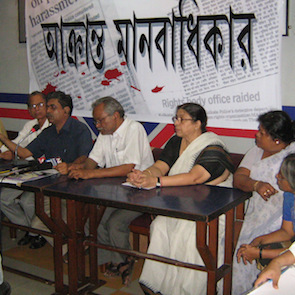 MASUM is a human rights NGO based in Kolkata in the State of West Bengal, India. Its work includes documentation, reporting and advocacy on human rights violations committed by state security forces, especially the Border Security Force operating along the Indo-Bangladesh Border. MASUM has been consistent in its support for victims of violations, especially poorer communities in the bordering districts of West Bengal in their struggle for redress and accountability.

Kirity Roy and three other human rights defenders of Banglar Manabadhikar Suraksha Mancha (MASUM), Ramen Moitra, Subhrangshu Bhaduri, and Sujoy Singh Roy, were detained, threatened, and verbally and physically abused by the Border Security Force (BSF) officers on 2 February 2019. They are facing a false complaint from the BSF and are at risk of arrest and legal harassment.

Kirity Roy is the secretary of MASUM, a non-governmental human rights organisation based in Howrah, Kolkata, West Bengal, near the border with Bangladesh. He is also the National Convener of the Programme Against Custodial Torture and Impunity (PACTII). The human rights defender and MASUM have been documenting human rights violations against civilians including extrajudicial killings, enforced disappearances, custodial death, torture and sexual violence, particularly on the Indo-Bangladesh border, committed by officers of the Border Security Force (BSF) and other state agents.

On 2 February 2019, Kirity Roy and three human rights defenders from MASUM, Ramen Moitra, Subhrangshu Bhaduri, and Sujoy Singh Roy, attended a legal awareness program organised by local community leaders in the border area of Chapra, Nadia District in West Bengal. Over the past several months, the local community has been protesting human rights violations committed by BSF officers in their villages through poster and other campaigns. The BSF responded with violence, threats, and false charges against community members and leaders, including members of MASUM.

While returning from Amra Simantabasi’s (‘We the Bordering People’) public meeting on 2 February, Kirity Roy witnessed several hundred people, who had attended the meeting, being stopped by BSF officers at the border fence gate. The Indian Government has constructed a border fence along the Indo-Bangladesh border, which in reality in certain places extends inland for up to 10-12 kilometers, cutting across villages and affecting people’s mobility and livelihood. The border is controlled by armed BSF officers, who in this instance were preventing people from returning to their homes and villages, within India’s territory.

When questioned by Kirity Roy as to legality of these actions, the BSF’s officer-in-charge responded aggressively and threatened the defender. The officer was then joined by at least eight other armed BSF officers who prevented Kirity Roy and his colleagues from leaving the area. The officers verbally and physically abused them and took photographs and video recordings of the human rights defenders without their consent. When Kirity Roy and the MASUM staff attempted to record the abuse on their phones, the BSF officers confiscated their devices and assaulted Kirity Roy.

The BSF officers repeatedly accused the human rights defenders of attempting to instigate violence and unrest. They threatened Kirity Roy by saying that he would face dire consequences if he or the MASUM staff continued to travel to the border areas without “permission from them”. The four human rights defenders were eventually able to leave the area after Kirity Roy contacted the Deputy Inspector General of Krishnanagar Sector.

On 2 February 2019, the BSF filed a First Information Report (FIR) to the Chapra Police Station against Kirity Roy and the three other MASUM human rights defenders. An inquiry into this complaint has been initiated.

On 27 January 2019, Kirity Roy was involved in separate incident with the BSF while he was speaking at a public meeting at the weekly Roypara market in Murshidabad District, near the Indo-Bangladesh border. The meeting, which had also been organized by Amra Simantabasi (“We the Bordering People”), was disrupted by the BSF. The officers entered the meeting, tore down posters that condemned human rights violations, and video recorded those at the meeting, including Kirity Roy. The human rights defender invited an officer to take the microphone and explain the BSF’s conduct to the people. The BSF left the event when the organisers began to use their mobile phones to video record them.

On 2 February 2019, the BSF filed a false complaint against Kirity Roy and MASUM staff at the Jalangi Police Station in Murshidabad relating to the incident at the public meeting on 27 January. The complaint described Kirity Roy and the MASUM human rights defenders as “unscrupulous” and accused them of “instigating local habitants [sic.] against BSF and other law enforcement agencies” and of attempting to “capture and confine the BSF personnel.”

Kirity Roy currently has several false cases pending against him, as do several District Monitors who are unable to return to their homes or continue their work on account of threats and abuse. On 1 February 2019, Front Line Defenders issued an Urgent Appeal, relating the violence perpetrated against woman human rights defender and MASUM volunteer Shila Bewa by BSF officers near the Indo-Bangladesh border.

Front Line Defenders believes that Kirity Roy and MASUM are being targeted as a result of their legitimate work in defence of human rights in particular their work to expose human rights violations of the BSF, the police, and other state agents. Front Line Defenders expresses its deepest concern for the physical and psychological integrity of Kirity Roy and other MASUM members.