About Ana Quirós
Status:
Deported
About the situation

Nicaraguan authorities deported woman human rights defender Ana Quirós, who is a is a Costa Rican and Nicaraguan national, on 26 November 2018. The deportation is part of a wider smear campaign against and repression of feminist movements in Nicaragua. 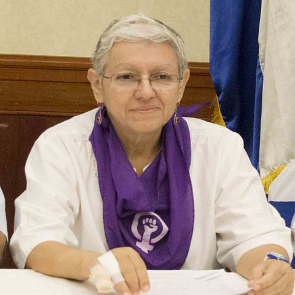 Ana Quirós is a feminist woman human rights defender, an expert in public health and director of the non-governmental organisation Centro de Información y Servicios de Asesoría en Salud (Centre for Health Information and Advisory Services). She is a Costa Rican and naturalised Nicaraguan citizen, who has worked in Nicaragua for the past 40 years, where she promotes socio-cultural rights and more specifically the right to health.

Nicaraguan authorities deported woman human rights defender Ana Quirós, who is a is a Costa Rican and Nicaraguan national, on 26 November 2018. The deportation is part of a wider smear campaign against and repression of feminist movements in Nicaragua.

Ana Quirós was called to attend a hearing at the General Directorate on Migration and Foreign Citizens (Dirección General de Migración y Extranjería), where she was handcuffed and detained alongside political prisoners inside El Chipote prison for over five hours. The defender was deported to Costa Rica on 26 November 2018, without the application of formal procedures or the possibility to obtain legal defence. During that time, no information on her whereabouts was given. The case was observed by the Consulate of Costa Rica, who advocated on behalf of Ana Quirós.

The deportation is believed to have been ordered in retaliation for her participation in a press conference by Nicaraguan feminist movements in Managua, where they announced that they canceled a planned protest on the International Day for the Elimination of Violence against Women on 25 November 2018. On 23 November 2018, a number of feminist leaders had been denied entry in police facilities in Managua, where they intended to request the permission for the protest.

The deportation of Ana Quirós follows prior attempts of the Nicaraguan authorities to weaken Nicaraguan feminist movements. On 23 November, Nicaragua’s Vice President Rosario Murillo gave a speech in which she portrayed feminist women as responsible for the crimes committed in Nicaragua during recent uprisings. She demanded punishment for their actions of “selfishness, vanity, and self-serving blindness”.

On that same day, a ban on the traditional carnival for the International Day for the Elimination of Violence against Women that had been held for the last 25 years in the city of Matagalpa was imposed. Regardless of having granted previous authorisation for the march, the police occupied the designated meeting points and the headquarters of the Women’s Collective of Matagalpa (Colectivo de Mujeres de Matagalpa), to prevent people from assembling.

The feminist human rights defenders Ana María Ara and María Jesús Ara, from Spain, and Beatriz Uber, from Switzerland, members of the Women’s Collective of Matagalpa, had their residence permits revoked and their citizenship processes ended by the General Directorate on Migration and Foreign Citizens (Dirección General de Migración y Extranjería, DGME). They were also forced to sign a document stating that they would refrain from participating in political acts and would present themselves to the authorities every 15 days.

Front Line Defenders is concerned about the use of prior restraint on social demonstrations by Nicaraguan authorities, and the actions of the General Directorate on Migration and Foreign Citizens harassing women human rights defenders. Front Line Defenders is especially concerned about the deportation of Nicaraguan human rights defender Ana Quirós, given the non-application of a formal process to her case and the lack of any legal provision for the deportation of Nicaraguan nationals.

4. Take all the necessary steps to allow the exercise of the rights to free association and peaceful demonstration in Nicaragua, especially for women human rights defenders.

5. Guarantee in all circumstances that human rights defenders in Nicaragua are able to carry out their legitimate human rights activities without fear of reprisals and free of all restrictions including judicial harassment.