By Carla V. Barbosa and Ivi Oliveira
Me mandaron una carta
Por el correo temprano
Y en esa carta me dicen
Que cayó preso mi hermano
[...]
Yo que me encuentro tan lejos
Esperando una noticia
Me viene a decir la carta
Que en mi patria no hay justicia
Los hambrientos piden pan
Plomo les da la milicia, si
[...]
Si acaso esto es un motivo
Presa también voy sargento,sí1
When one travels to meet Brazilian human rights defender José Vargas it is impossible not to pay particular attention to the road. The nearest airport is 350k from his home in Redenção, through a road which is the site of Brazil’s two biggest massacres of rural workers and land rights defenders in the last 25 years. Military police killed 19 people marching towards the state capital Carajás Massacre in 1996; in the 2017 Pau D’Arco Massacre, civil and military police murdered 10 people who occupied a piece of land.
The southern and southeastern region of Pará, once covered by the Amazon rainforest, is one of the main agricultural frontiers in Brazil. Not coincidentally, it is also one of the most dangerous regions on the continent in terms of agrarian conflicts. Agribusiness grows uninhibited, over the lives of rural workers.
It is in this context that our friend José Vargas works. He is teacher and human rights lawyer, whose courage inspires awe and admiration. He has played a leading role in several of Brazil’s most emblematic human rights cases, and is currently one of the lawyers in the ongoing struggle for justice in the Pau D'Arco Massacre. He is known for his brilliant political analyses, ironic sense of humour, sensitivity to social causes, great taste for music, being an avid reader, and his radiant love for his two daughters.
Despite knowing Jose Vargas since 2017, the last time we visited him was a bit different. Not only because we were unable to meet for quite some time due to COVID-19, but because this time, Jose Vargas was under house arrest. 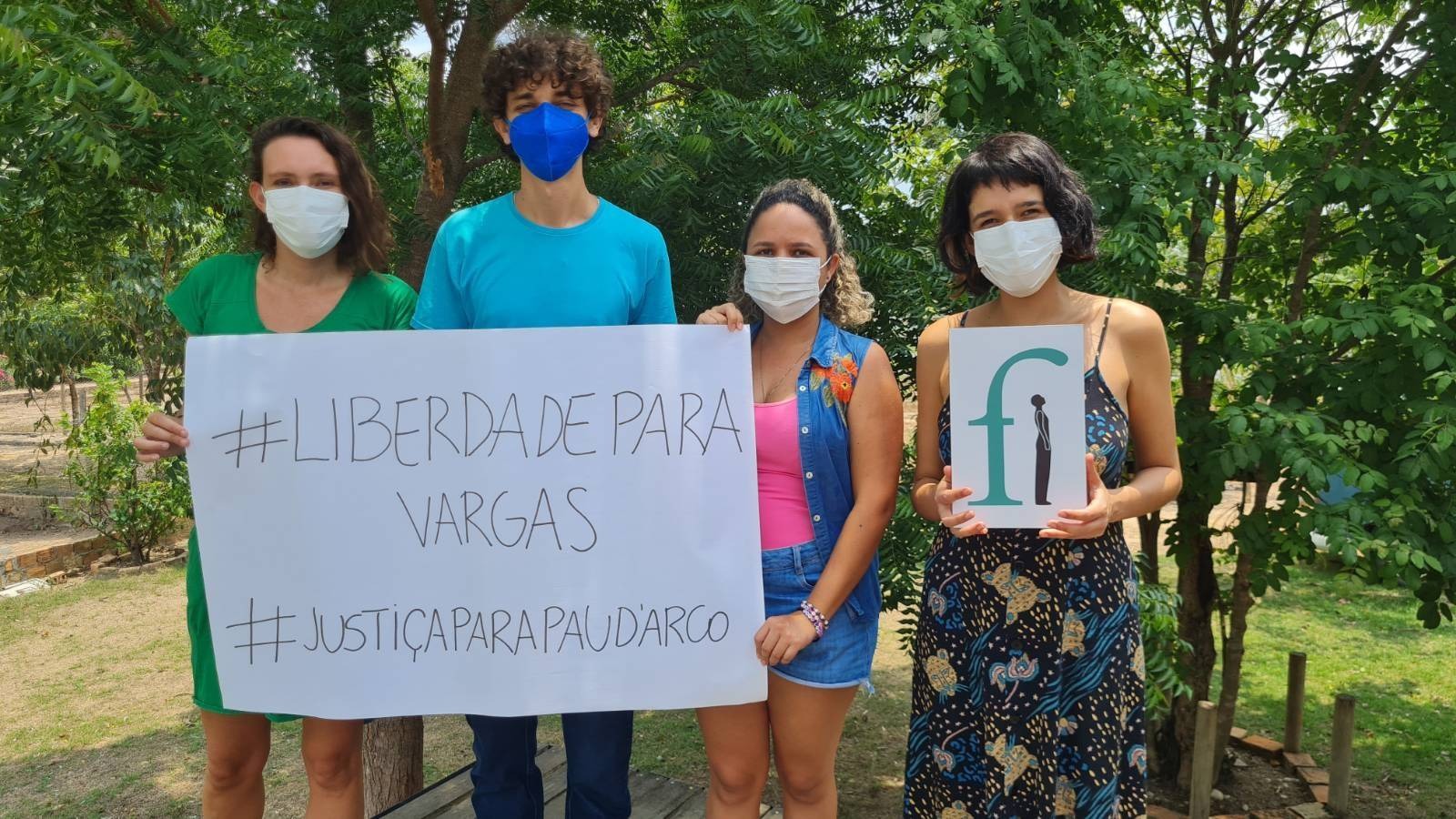 Mas não se preocupe meu amigo
Com os horrores que eu lhe digo
Isso é somente uma canção
A vida realmente é diferente
Quer dizer
Ao vivo é muito pior2
……………………………………………………………….
It was midday, Saturday, 02 January 2021 when the news arrived to us: prenderam o Vargas – ‘Vargas was imprisoned’. He was arrested on January 1, 2021, while celebrating New Years at home with his wife and two daughters, accused of involvement in the disappearance of a local politician in October 2020. Vargas had already faced retaliation from his work before, which led to his inclusion into the State Protection Program for HRDs, as well as temporarily leaving Redenção with his family some years ago. However, and in Jose Vargas’ own words ‘I confess that I might had even fear possible abuse and state arbitrariness, but I never imagined that I could ever be accused of such a barbarian crime.’ Many in the movement see José Vargas' arrest as a clear attempt to impede justice for victims and survivors of the Pau D'Arco Massacre.
Around the world, Front Line Defenders has documented increased misuse of the judicial system to silence human rights defenders by imprisoning them, destroying their reputation and interrupting their work. For Vargas, legal processes and professional rights have been ignored. To date, he and his lawyer are still denied access to his cell phone and work computer, which contain fundamental evidence to support his innocence.
More than 11 months have passed since he was arrested. Since January 25, the human rights defender has been under house arrest. On December 13, 2021, while we were just finishing writing this article, we received the news that the assistant judge of the Criminal Court decided to maintain his house arrest for at least another three and a half months, scheduling a hearing on the case for 25 March 2022.
Today, 14 December, is Jose Vargas’ birthday. It is hard to believe the police officers from Pau D’Arco Massacre are free and on duty, and that Jose Vargas is not. Vargas is a needed lawyer in an Amazon under attack, in a country where all the democratic structures are being dismantled. Everybody knows Jose Vargas arrest is unfair. He should be celebrating with friends and families, resuming the plans for the road trip he had planned for last January with his family. We remain fighting for his freedom.
Dear Vargas, we are with you. Happy birthday from a distance.
“I don't think we have any alternative other than remaining optimistic. Optimism is an absolute necessity, even if it's only optimism of the will, as Gramsci said, and pessimism of the intellect.”
― Angela Y. Davis, Freedom Is a Constant Struggle

1Excerpt of song ‘La Carta’ by Chilean Violeta Parra'They sent me a letter by the post, this morning. In this letter they tell me that my brother is in jail. […] I, so far away, waiting for news. The letter tells me that in my country there's no justice. The hungered ask for bread and they receive bullets, yes. […] Well, if that is the reason please take me to jail too, sargent, yes.'

2Excerpt of song ‘Rapaz Latinoamericano’ by Brazilian Belchior. 'But don't worry my friend with the horrors I tell you. This is just a song. Life really is different. I mean, live is much worse. '