Iran: Repression of those seeking truth and justice for 1980s killings needs to stop

March 8, 2017– In a joint statement, 20 human rights organizations called on the Iranian authorities to stop the harassment, intimidation and prosecution of human rights defenders seeking truth and justice on behalf of individuals who were summarily executed or forcibly disappeared during the 1980s and their families.

Over the past few months, several human rights defenders, including Mansoureh Behkish, Maryam Akbari-Monfared and Raheleh Rahemipour, have been subjected to harassment, reprisals or prosecution on vague national security-related charges for their peaceful efforts to learn the fate and whereabouts of their loved ones. The persecution signals renewed efforts by the authorities to suppress the struggle that has been ongoing for over three decades to reveal the truth about the gross human rights violations that were perpetrated by the Iranian authorities during the 1980s, including the extrajudicial executions of several thousands in 1988 and their burial in unmarked mass graves.

The latest wave of persecution of those seeking truth and justice appears to have been triggered by the release in August 2016 of an audio recording of a meeting in 1988 in which senior officials are heard discussing and defending the details of their plans to carry out the 1988 mass executions.

The audio recording has sent shockwaves across the country and prompted the authorities to admit for the first time that the mass killings of 1988 were planned at the highest levels of government. Ahmad Montazeri, the son of the late Ayatollah Hossein Ali Montazeri, who was at that time the Deputy Supreme Leader, has since been sentenced to imprisonment for posting the audio file on his father’s website.

The undersigned human rights organizations are deeply concerned about these developments and call on the Iranian authorities to quash the convictions and sentences issued against Maryam Akbari-Monfared, Raheleh Rahemipour and Ahmad Montazeri; close the criminal case opened against Mansoureh Behkish; and immediately and unconditionally release Maryam Akbari-Monfared. The authorities should also ensure a safe and enabling environment in which it is possible for human rights defenders, including family members, to seek information about the mass killings, express themselves without any fear of persecution, and defend the rights to truth, justice and reparation, as a first step to ending impunity in Iran.

The undersigned human rights organizations urge the Iranian authorities to stop their attempts to silence human rights defenders and others seeking to shed light on past atrocities. Instead, they should respect their obligations under international human rights law to carry out thorough and impartial investigations into the serious human rights violations committed in the 1980s, including the 1988 extrajudicial executions, and ensure the rights to truth, justice and reparations for the victims and their families.

Individuals who have been targeted in recent months for seeking truth and justice include human rights defenders Mansoureh Behkish, Maryam Akbari-Monfared and Raheleh Rahemipour, and the son of the late Ayatollah Hossein Ali Montazeri, Ahmad Montazeri.

Mansoureh Behkish was informed on 29 October 2016 that she had been charged with “gathering and colluding to commit crimes against national security” and “spreading propaganda against the system”. The charges stem solely from her peaceful human rights work to seek truth and justice, including her work with the Mothers and Families of Khavaran, a group comprised of mothers and other family members of political prisoners summarily executed during the 1980s, and from holding commemorative gatherings at her home and going with other families to Khavaran, a deserted mass gravesite in the south of Tehran where Iranian authorities buried some of the thousands of political prisoners extrajudicially executed in the 1980s, including Mansoureh Behkish’s sister, four brothers and brother-in-law.

Maryam Akbari-Monfared has faced reprisals since October 2016, when she filed a formal complaint from inside prison requesting an official investigation into the mass executions of political prisoners in the 1980s, including her brother and sister; the location of the graves where their bodies were buried; and the identity of the perpetrators involved. Officials have cancelled her medical care arrangements for her rheumatoid arthritis and thyroid problems and restricted visits from her family, including her three children, in retaliation. The prosecution authorities have also threatened her with new charges. According to her family, the Associate Prosecutor of Evin prison has said: “What does she want to know? Those who executed her brothers and sister have either died or become elderly and her brothers and sister are probably buried in Khavaran… Such complaints are of no use. They would only make her conditions in prison more difficult and impede her release or access to [prison] leave.”

Maryam Akbari-Monfared is serving a 15-year sentence in Tehran’s Evin prison on several charges, including “enmity against God” (moharebeh), after a May 2010 sentencing. Amnesty International’s research indicates that her conviction was based on the fact that she had made several phone calls to her siblings, who are members of the banned opposition group known as the People’s Mojahedin Organization of Iran (PMOI), and had once visited them near the PMOI-run Camp Ashraf in Iraq. She has consistently denied her alleged membership in the PMOI. She was never provided with a written judgement, setting out the evidence and legal reasoning relied upon to convict her. Her husband has said that during her trial session, the judge told her “she was paying for the activities of her brother and sister with the PMOI”. Her appeals were dismissed in a summary fashion with no reasons provided. Her request for judicial review is currently pending before Iran’s Supreme Court.

Raheleh Rahemipour was sentenced to one year’s imprisonment in January 2017 after Branch 15 of the Revolutionary Court in Tehran convicted her of “spreading propaganda against the system” for her peaceful efforts to learn the truth about the whereabouts of her brother Hossein Rahemipour, who was summarily executed in 1984, and his baby daughter Golrou Rahemipour, who was forcibly disappeared 15 days after she was born in Evin prison. The prison authorities took the baby away, ostensibly for medical tests, but never returned her to her mother. The family was subsequently told that baby Golrou Rahemipour had died, but the authorities never provided a death certificate, information about her death, or where she had been buried.

The court verdict issued against Raheleh Rahemipour cites her media interviews, her participation in peaceful gatherings while holding a sign that read “You killed my brother! What did you do to his daughter?”, and her signature on a petition in support of demands for truth and justice for those summarily executed as “evidence” of acting against national security. In May 2016, the UN Working Group on Enforced or Involuntary Disappearances sent a communication to the Iranian authorities with regard to the case of Raheleh Rahemipour’s brother and niece. The authorities had not responded by the end of February 2017. Raheleh Rahemipour remains at liberty, awaiting the outcome of her appeal.

Ahmad Montazeri, the son of the late Ayatollah Hossein Ali Montazeri, was sentenced to 21 years’ imprisonment in November 2016 after the Special Court of Clergy convicted him of several charges including “spreading propaganda against the system” and “revealing plans, secrets or decisions regarding the state’s domestic or foreign policies…  in a manner amounting to espionage”. The court ruled that in light of Ahmad Montazeri’s family history and lack of a criminal record, he only needs to serve six years of the sentence. Ahmad Montazeri’s conviction stems from the publication of the audio file on his father’s website, which the authorities said advanced the interests of the enemies of the Islamic Revolution, and the media interviews that he subsequently gave to media outlets based outside Iran. Ahmad Montazeri was imprisoned on 22 February 2017 to begin serving his sentence, but was granted temporary prison leave the next day. He was informed several days later that his prison sentence had been suspended.

Ayatollah Hossein Ali Montazeri was once in line to become the late Supreme Leader Ayatollah Ruhollah Khomeini’s successor but he lost his status after he voiced strong opposition to the 1988 mass killings. In the audio file released by his son in August 2016, Ayatollah Hossein Ali Montazeri is heard saying: “The greatest crime committed in the Islamic Republic, for which history will condemn us, has been committed at your hands and, in the future, your names will go down in history as criminals.”

Under international law, individuals against whom there is evidence of criminal responsibility for serious international crimes, including those with command responsibility, should be prosecuted and tried before a court established by law and with all necessary procedural guarantees, in accordance with international fair trial standards.

If found guilty, they should be punished with appropriate penalties, which take into account the grave nature of the crimes but which do not include the death penalty or corporal punishments. 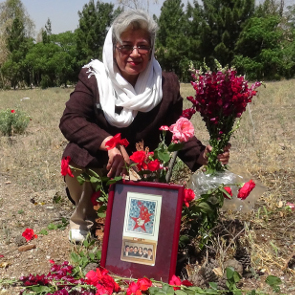