Front Line Defenders expresses deep concern regarding the deterioration of the conditions in which human rights defenders, civil society organisations and journalists carry out their work in Guatemala. This is attributable to an increase in attacks on and criminalisation of human rights defenders, pervasive impunity, the drafting of restrictive legislation and the closure of fundamental spaces for dialogue with the authorities in the country and access to justice and information.

24 years on from the signing of the peace accords in 1996, that put an end to 36 years of internal armed conflict in Guatemala, the authorities continue to face profound challenges in guaranteeing the human rights of the people who live there, not least the rights and protection of human rights defenders working to promote and protect human rights in the country. In this context, the Unit for the Protection of Human Rights Defenders (UDEFEGUA) has reported that human rights defenders and journalists face a generalised and constant risk due to the government’s failure to implement effective public policies intended for their protection.

Despite the decision of the Constitutional Court (CC) in March 2020 to grant a provisional injunction against Decree No.04-2020 – known as the NGO Law – because of concerns about its potentially adverse impact on human rights, the provisional nature of the injunction is cause for concern at both the national and international level. Possible reforms to Decree 2-2003 by Decree No.04-2020, would allow for greater government control over national and foreign organisations operating in the country, by granting the executive branch the power to revoke the legal status of any NGO when its activities are deemed to be contrary to "public order".

Between June and July 2020 - in the midst of the mobility restrictions due to the COVID-19 pandemic - President Alejandro Giammattei announced the merging of four state institutions, previously dedicated to the protection of victims of human rights violations and armed conflict, and the furthering of human rights: the Presidential Secretariat for Women (SEPREM), the Secretariat for Peace (Sepaz), the Presidential Coordinating Commission for the Executive's Policy on Human Rights (COPREDEH) and the Secretariat for Agrarian Affairs (SAA) (three of which emerged as a result of the 1996 peace accords) into a single institution, the Presidential Commission for Peace and Human Rights (Copadeh). The merging of these institutions has created a sense of uncertainty and a lack of clarity as to how the government will fulfil its international obligations regarding human rights and the protection of human rights defenders and journalists, as responsibilities within the newly established institution remain unclear.

The dissolution of COPREDEH risks jeopardising the process the institution had been undertaking since 2015 to design a public policy with adequate resources and participation, to strengthen the inter-institutional response to risks faced by human rights defenders. In addition, on 23 March 2021, the Congress of the Republic voted against transferring 20 million quetzales to the Human Rights Ombudsman's Office (PDH), despite the allocation of the funds to the PDH in the 2020 budget, specifically designated for the salaries of the staff working there.

On 14 April 2021, the five new magistrates of the Constitutional Court (CC) and their deputies were sworn in and will hold office until 2026. Civil society organisations and academics have expressed concern about possible conflicts of interest and assurances of impartiality, due to the close relationship of some of the newly appointed magistrates with the executive branch and with the military leadership, with a link to General Efraín Ríos Montt in particular.

At a time when the social impacts caused by the COVID-19 pandemic and the devastation left by hurricanes Eta and Iota are still present, a pattern of attacks and threats persists against human rights defenders, civil society actors and journalists who have highlighted situations of vulnerability in which thousands of people in Guatemala find themselves. Front Line Defenders has previously denounced these attacks, the impunity enjoyed by the perpetrators, and highlighted that they are mostly intended to intimidate those who defend the environment, women's rights, the rights of indigenous peoples, those who exercise freedom of expression and of particular concern, indigenous women human rights defenders.

On 5 April 2021, the appeal hearing of Q'eqchi' Mayan indigenous human rights defender Bernardo Caal was suspended. The human rights defender’s legal team were due to present a defense against his conviction. Bernardo Caal was arrested and sentenced to seven years in prison for the fabricated charges of "illegal detention with aggravating circumstances and aggravated robbery" in 2018. The criminal proceedings against him are in retaliation for his leading role in efforts to defend the right of indigenous communities of Santa María Cahabón to free and informed consultation in relation to the construction of a hydroelectric dam on the Oxec and Cahabón rivers in Alta Verapaz.

On 31 March 2021, journalist Marvin del Cid was detained and interrogated for 20 minutes by members of the National Civil Police (PNC) in Guatemala City. Marvin del Cid believes he was targeted because he denounced on social media the attempted criminalisation of his colleague Sonny Figueroa, following the publication of his investigation "Los rostros y perfiles del Centro de Gobierno" in September 2020. The attempts to criminalise Sonny Figueroa are widely viewed as efforts to undermine his journalistic work and integrity. Both journalists assert that police harassment against them has increased since the beginning of 2020.

The case of Mayan K'iche' indigenous human rights defender and journalist Anastasia Mejía Tiriquiz, who remains under house arrest on baseless allegations of "sedition and aggravated assault", has seen multiple delays and violations of due process in the criminal proceedings against her. The woman human rights defender has long defended the right to freedom of expression despite discrimination, persecution and criminalisation against her for doing so and for expressing her indigenous identity.

Front Line Defenders reiterates its call for the authorities in Guatemala to adopt and implement effective mechanisms and policies that recognise the valuable contribution of the work of human rights defenders to Guatemalan society. The organisation also recalls the government’s obligation to guarantee the personal integrity of human rights defenders, as well as to recognise the right to defend human rights, as ordered by the Inter-American Court of Human Rights in the 2014 judgment "HUMAN RIGHTS DEFENDER et al. v. GUATEMALA" in which the Court ordered that Guatemala adopt a Public Policy for the Protection of Human Rights Defenders. The realization of such a public policy is compromised however by the merging of COPREDEH, the institution leading the initiation of such a policy, with three other institutions.

Front Line Defenders urges the authorities in Guatemala allow for the continuation of collaboration with human rights defenders and civil society organisations for the construction of comprehensive public protection policies with a gender perspective and an intersectional approach, and to refrain from committing acts of verbal stigmatisation, legal intimidation, criminalisation or misuse of criminal law against human rights defenders and journalists in the country. 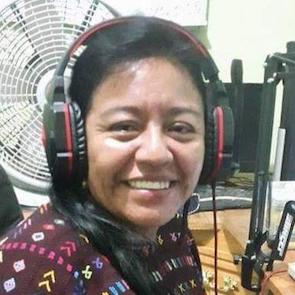