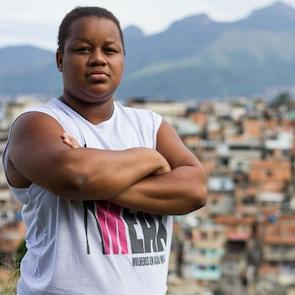 "We are doing active work. We are a collective of women doing the minimum for other women here and in other slums of Rio de Janeiro. Our focus is to promote heads of families, whether or not they are victims of domestic violence. Therefore, we register, monitor and accompany these women and their families.”

Camila Moradia was the recipient of FLD's Award for Human Rights Defenders at Risk for the Americas region in 2021. She was born in a place known as Grota, in the group of favelas that make up the Complexo do Alemão. "Cria do morro" as she is born, raised and lives in Alemão. Her family is in its fourth generation in the favela.

Camila accompanied her mother in the fight for rights, especially women's rights since she was five years old. She has always studied in day care schools in the Alemão area. She participated in almost all social projects available according to her age, lived for 5 years in Minas Gerais and after finishing high school, returned to her home (Alemão Complex) at the age of 18.

In 2004, Camila returned to participate actively in social projects developed by the City Hall and the State Government of Rio de Janeiro. She was a young apprentice, monitor and supervisor in these projects. She worked in Rio for 10 years developing several social and development activities with the residents, mainly women. Camila always believed that women were the main tool for transformation in society, but they were also the ones who suffered the most from the reality.