On 17 August 2018, the public security bureau in Jiangmen City, Guangdong Province, informed Wei Xiaobing that the period of his release on bail pending trial has formally concluded. During this period, Wei Xiaobing was subjected to constant harassment, including being repeatedly summoned by police for interrogation, forced to travel during “sensitive periods”, and unable to leave his place of residence.

On 31 October 2017, Chinese authorities refused human rights defender Wei Xiaobing’s (卫小兵) third request to leave his hometown. The defender has been kept under “soft” detention in Ya’an, Sichuan Province, since his release from detention on 19 August 2017. 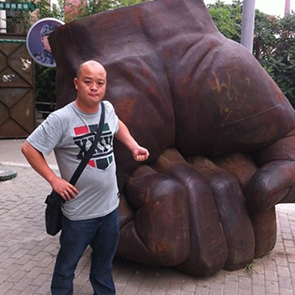 Wei Xiaobing is a human rights defender who advocates for the rights and wellbeing of Chinese farmers and prisoners of conscience. Since 2011, when he joined protests calling for the release of illegally detained human rights lawyer Chen Guangcheng, he has led advocacy and food delivery programs for several detained human rights defenders including Tan Zuoren, Huang Qi, Li Xiaoling, and Guo Feixiong. In 2013, Wei Xiaobing assisted over 200 farmers in Lufeng, Guangdong Province in securing their right to compensation following massive crop failures due to faulty seeds sold by a local government office. This amounted to some three million yuan (~€370,000). He has also called for government accountability in the disappearance and unlawful detention of political dissidents and government critics.

On 31 October 2017, Chinese authorities refused human rights defender Wei Xiaobing’s (卫小兵) third request to leave his hometown. The defender has been kept under “soft” detention in Ya’an, Sichuan Province, since his release from detention on 19 August 2017.

“Soft” detention is a form of unofficial police supervision and surveillance. Wei Xiaobing believes his recent detention is in retaliation for his recent demonstrations of solidarity for deceased Nobel laureate Liu Xiaobo, who died in detention in July 2017. On 19 July 2017, Wei Xiaobing was detained with eight others for holding a memorial ceremony commemorating Liu Xiaobo. The nine detainees were placed in criminal detention in Guangdong Province Xinhui Detention Centre for one month on charges of “disturbing public order”. Following his release on 19 August 2017, Wei Xiaobing was sent back to his hometown of Ya’an, where he has been kept under an unofficial travel ban for over two months.

Wei Xiaobing discovered that his movement was being restricted on 28 August 2017, when he notified the police office in Ya’an’s Lushan District of his intention to visit his daughter and ailing mother at his family home in Lufeng, Guangdong Province. Upon notification, the human rights defender was instructed to wait until the conclusion of the Chinese Communist Party’s 19th Party Congress, scheduled for late October. Shortly after, his mother was visited by over two dozen special police and domestic security officers, who threatened and intimidated her until she agreed to write a letter instructing Wei Xiaobing not to visit.

On 29 and 31 October 2017, following the conclusion of the Party Congress, Wei Xiaobing submitted two new travel requests, one to conduct business in the nearby Lin District, and a second to visit his mother and daughter in Lufeng. The first request was denied as Ya’an authorities informed him that Guangdong Province had refused to accept the human rights defender should he attempt to visit. In response to his third request, Lufeng authorities again dispatched two dozen special police and domestic authority officers to the home of his mother on 1 November 2017. The officers harassed Wei Xiaobing’s mother, threatening to evict her from her home until she called him in tears, begging him not to visit Lufeng.

Front Line Defenders calls on Chinese authorities to cease their restrictive supervision and harassment against Wei Xiaobing, as it believes that this is solely an attempt to deter his peaceful work in support of human rights. Furthermore, Front Line Defenders demands that Chinese authorities cease their harassment and intimidation of Wei Xiaobing’s family.

1. Drop all investigations against Wei Xiaobing, put an end to his “soft” detention and permit him to visit his family;

2. Immediately and unconditionally remove all restrictions on the free movement of Wei Xiaobing and cease all further forms of surveillance or harassment against him and his family, as it is believed that these measures are only solely related to his legitimate human rights activities;