On 9 June 2020, Ana María Belique, Maribel Nuñez and Fernando Corona were arbitrarily detained and physically assaulted by police officers whilst leading a peaceful demonstration in honour of George Floyd and protesting racism in Independence Park in Santo Domingo. A series of threats were received by Ana María Belique in the days preceding the demonstration. 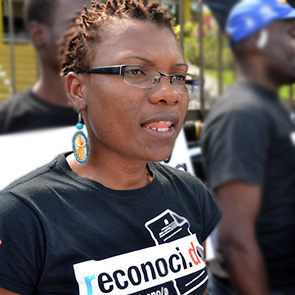 On 9 June 2020, Ana María Belique, Maribel Nuñez and Fernando Corona were arbitrarily detained and physically assaulted by police officers whilst leading a peaceful demonstration in honour of George Floyd and protesting racism in Independence Park in Santo Domingo. A series of threats were received by Ana María Belique in the days preceding the demonstration.

Ana María Belique is the coordinator of Reconocido (Common National Organized Network of Dominican Citizens), a movement which promotes citizenship rights and equality for Dominican people of Haitian descent, mobilises and empowers marginalised communities and provides legal aid. Maribel Nuñez is a journalist, an Afro anti-colonial activist and a human rights defender of Haitian descent. She is a member of Acción Afro-Dominicana (Afro-Dominican Action), an organization that seeks to highlight the issue of racism and its consequences. She is also recognised for her advocacy in promoting women's reproductive rights in the Dominican Republic. Fernando Corona is a human rights defender of Afro-descent. He has been involved in different social movements for the vindication of black culture and Afro-descendants, as well as groups including the Citizen Power Movement and the Green March Movement, which aim to combat corruption and impunity in the Dominican Republic.

On 9 June at about 10.00 am, organisers of the anti-racism march Ana María Belique, Maribel Nuñez, and Fernando Corona were arbitrarily detained by police in Independence Park whilst peacefully protesting. The police used physical violence in their efforts to detain the three defenders and when loading them into a riot squad vehicle. The violent nature of the detention was reported by Ana María Belique via a Whatsapp voice note message and by Maribel Nuñez in a post on Facebook, in which she wrote that General Báez Aybar, North regional director of police, and other officers used racist verbal attacks against them.

Whilst en route to the police station in the district of Detil, the three defenders requested to be permitted to contact their lawyers and families, but were denied the right to do so. At no time were they told of the charges against them. Before entering the police station, the defenders were required to be tested for COVID-19 in a hospital in Villa Juana, where there has been a significant number of cases of the virus. They told the hospital staff of their violent detention by police and requested written reports on their conditions as evidence. The doctor attending to the defenders carried out a brief check-up on each of them, and did not include the bruising Maribel Nuñez incurred as a result of the police violence in his reports.

As none of the three presented COVID-19 symptoms, they were returned to Detil police station, where their photos were taken with the signs they had been holding during the protest. The defenders reported that the detention conditions did not comply with COVID-19 sanitary measures and so were at risk of infection. During their detention, officials from the National Human Rights Commission presented themselves at the police station. Having faced no charges, the human rights defenders were released three hours after their arrest.

In the days before the peaceful protest took place, a number of the organisers, including Ana María Belique, were threatened with physical violence in a video uploaded to social media. It is believed by the human rights defenders that the video was uploaded by a member of the Old Dominican Order (ODA), an ultra-nationalist and militant political movement, which has historically propagated a discourse of xenophobia against people of Haitian descent in the Dominican Republic. In the video an unidentified individual states: “that march is not happening otherwise blood will spill in this country, to you Ana Belique and everyone who is involved in that march”. He called the organisers "damn savages" and threatened that the march would be stopped "with blood and fire." On 9 June, the ODA organised a protest against the “Haitian invader” to take place in Independence Park, two hours before the anti-racism protest. In a video uploaded to social media, the same ODA member who posted the threatening video can be seen aggressively confronting Ana María Belique at the protest and using nationalist rhetoric.

The ODA has previously posted and shared threatening content on social media about Ana María Belique and other defenders of the rights of Dominicans of Haitian descent. On 8 June, the day before the peaceful protest, the defenders informed the Deputy Human Rights Ombudsman about the threats they had received.

The risk faced by Ana María Belique, Maribel Nuñez and Fernando Corona as human rights defenders in the Dominican Republic is significantly increased by virtue of the fact they are working in contexts where racism and ultra-nationalism are prevalent. They and other defenders are not only vulnerable to the risks inherent to human rights work, but also to the racism and racist violence which occurs with impunity in the country in which they work, and in many instances is perpetrated by state authorities or ignored and unpunished by authorities.

Front Line Defenders is seriously concerned by the arbitrary detentions of and threats, physical attacks and racism against Ana María Belique, Maribel Nuñez and Fernando Corona. Front Line Defenders believes that these arbitrary detentions and threats are part of a comprehensive strategy of intimidation and violence against human rights defenders who advocate for the political and civil rights of Dominicans of Haitian descent living precariously and at imminent risk of being deported, as verified by the Inter-American Court of Human Rights since 1991. Front Line Defenders believes that the arbitrary detention of the defenders and the police brutality against them is in direct retaliation for their peaceful and legitimate work in defence of human rights.