About Haytham Mohamadeen
Status:
Released
About the situation

On 14 October 2016, Haytham Mohamadeen was released from pretrial detention. However, the Criminal Court of Cairo has not dropped the charges against the defender yet. 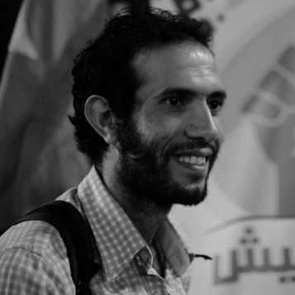 Haytham Mohamadeen is a lawyer and a labour rights defender, who offers pro bono legal aid to workers. He is a member El-Nadim Center for the Rehabilitation of Victims of Violence, an Egyptian NGO dedicated to combating torture and providing medical and legal care support to victims of human rights violations.

Update: On 14 October 2016, Haytham Mohamadeen was released from pretrial detention. However, the Criminal Court of Cairo has not dropped the charges against the defender yet.

On 27 September 2016, the Criminal Court of Cairo confirmed the detention order imposed against human rights defender Mr Haytham Mohamadeen for a further 45 days. He is charged with calling for protests to overthrow the regime, participation in an illegal demonstration, disturbing public order, and joining a banned group.

The court had initially ordered the extension of his detention on 22 September. This decision was appealed by his lawyer, but on 27 September the court rejected the appeal and confirmed his detention for a further 45 days, pending investigation.

The human rights defender was arrested from his home on 22 April 2016, following a call by civil society actors to protest on 25 April 2016 against human rights abuses committed by security forces, the ruling regime's policies and the government’s decision to cede the sovereignty of two Red Sea islands to Saudi Arabia.

Haytham Mohamadeen was arrested from his home on 22 April 2016, following the call to protest of 25 April 2016. He is currently detained awaiting the next interrogation session scheduled for 1 June 2016, on charges of “joining a banned group, participating in an illegal protest and plotting the overthrow of the state.”

Haitham Mohamadein is a human rights defender and labour lawyer who offers pro bono legal aid to labourers and workers. No charges were filed against him. Although no explanation was given at the time of his arrest, the authorities later stated that they were investigating his possession of papers that "threatened national security". His current release was described as "temporary" pending a report by the National Security service on the papers which they confiscated from him.

Front Line Defenders further notes with concern the involvement in this case of the National Security service, established in 2011 after the dissolution of the State Security Intelligence, which was notorious for targeting human rights defenders. Front Line Defenders urges the newly formed Egyptian government to fully commit to guaranteeing that all human rights defenders in Egypt can carry out their work safely and without harassment.

On 5 September 2013, human rights lawyer Mr Haitham Mohamadein was arrested by the Egyptian military at a check point in Suez while he was travelling on a bus from Cairo. He has been transferred to Faisal police station in Giza.

Haitham Mohamadein was travelling to Suez to meet with representatives of factory workers who had requested his legal counsel. Once his bus arrived at the military check point in Suez, he was called off the bus individually, suggesting that the arrest was targeted specifically at him. The reasons for his arbitrary detention are still uncertain; he has not yet been charged.

The human rights defender is a prominent figure in Egyptian civil society as a defender of labour rights and as a member of the El Nadim Centre. He has regularly appeared on television and other media networks in his capacity as a defender of workers' rights.

Front Line Defenders is concerned at the arbitrary arrest of Haitham Mohamadein in the light of the indications that he is specifically targeted as a result of his human rights activities, and fears for his safety and physical and psychological integrity while in detention.