About Tonico Benites
Status:
Threatened
About the situation

Incidents of persecution, threats and harassment against human rights defenders and indigenous leaders have increased since late August 2015. On 5 April 2016, Mr Tonico Benites received an intimidatory text message. A few months earlier, on 2 September 2015, Tonico Benites, Eliseu Lopes and Genito Gomes were followed by two unidentified men in a car as they returned to Dourados (MS). Upon realising this, they decided to drive towards the police station, at which point the car stopped following them. The following day, 3 September 2015, four unknown individuals arrived at the indigenous community's lands and asking about the whereabouts of Tonico Benites, Eliseu Lopes and Genito Gomes. 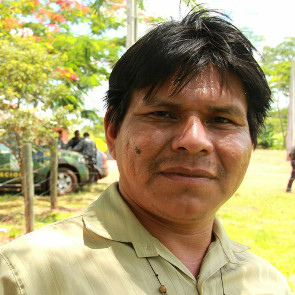 Dr. Tonico Benites is an indigenous rights leader, anthropologist and human rights defender from Brazil. He is the leading spokesperson of Aty Guasu, an organisation representing Guarani-Kaiowá indigenous leaders and has developed extensive research and mapping on the violence perpetrated against indigenous communities in Brazil. As a direct result of his work to expose the patterns of attack against these communities, Benites has received death threats and in 2014 he was included in the Special Secretary of Human Rights of the President of Brazil's protection programme for promoters of human rights. He is a Masters and PhD graduate of the Federal University of Rio de Janeiro and is continuing his academic career with a Post-Doctorate in Social Anthropology.

On 11 April 2016, human rights defender and Tupinambá indigenous leader Mr Rosivaldo Ferreira da Silva was placed under house arrest after being arbitrarily arrested on 7 April 2016 by the military police (polícia militar) in the state of Bahia, Northeastern Brazil. This follows previous incidents of threats and intimidation against indigenous rights defenders in Brazil. On 5 April 2016, Mr Tonico Benites received an intimidatory text message and on 31 March 2016 Mr Paulino Terena was prevented from giving testimony in his native language before a Commission established to investigate the killings of indigenous persons in Brazil.

On 11 April 2016, the Federal Court of Ilhéus (Vara única de Ilhéus), Bahia, ordered that Cacique Babau and his brother, Mr José Aelson Jesus da Silva, known as Teity Tupinambá, be released from the State Prison of Ilhéus and placed under house arrest. The human rights defender and his brother were arbitrarily arrested on 7 April 2016, in the city of Gravatá for allegedly carrying an illegal firearm. Cacique Babau claims that the weapons were deliberately planted on him and his brother. They are being charged with the crimes of illegal firearm carrying, bodily harm, threats, resisting arrest and contempt of authority. The arrest followed Cacique Babau's visit to the indigenous territory in Olivença to observe the situation of the community following a violent land recuperation operation conducted by the military police. The disputed lands in question have been recognised as Tupinambá indigenous territory, but the demarcation is still pending. Meanwhile, tensions have escalated between indigenous communities and those working on illegal sand mining in the region (caçambeiros).

Prior to this incident, on 5 April 2016, human rights defender and indigenous leader Tonico Benites received a threatening text message stating that he should “stop showing that video” otherwise he would suffer terrible consequences. The message refers to a video presented by Tonico Benites in a hearing before the Parliamentary Commission of Inquiry (Comissão Parlamentar de Inquérito – CPI) which is investigating the killings and violence against indigenous persons and the State's alleged omission in these cases. The video shows violent land recuperation operations conducted against indigenous peoples in Mato Grosso do Sul.

During the above-mentioned hearing, on 31 March 2016, indigenous leader Paulino Terena was harassed. The human rights defender was prevented from giving his testimony before the CPI as he asked for a translator for his indigenous mother tongue, Terena. Although there was a translator present in the session, some members of the CPI vehemently opposed to idea, saying that he could speak in Portuguese and that he should speak Portuguese, even though it was Paulino Terena's constitutional right to speak in his native tongue.

Because of their human rights work Cacique Babau, Tonico Benites and Paulino Terena have been  facing different forms of intimidation and harassment in the past number of years. Cacique Babau was first arbitrarily arrested back in 2008 and since this time, the human rights defender has been subjected to constant police and judicial harassment. Tonico Benites has been facing escalating threats since the revisiting of the land dispute in Mato Grosso do Sul in 2015, even though he and Paulino Terena, who was the victim of an assassination attempt in 2013, were beneficiaries of the National Programme for the Protection of Human Rights Defenders when the above-mentioned incidents occurred. The indigenous rights defenders have claimed to be in constant danger despite  the protection measures issued in the National Programme by the Brazilian government. The situation is such that the defender's have implemented their own security measures to ensure their safety such as often changing and moving between locations.

Front Line Defenders strongly condemns the harassment, threats and intimidation against human rights defenders and indigenous leaders Cacique Babau, Tonico Benites and Paulino Terena of, respectively, the Tupinambá, Guarani-Kaiowá and Terena peoples, which it believes to be directly linked to their role in the defence of indigenous rights. Front Line Defenders expresses further concern about attacks, threats, harassment and other forms of intimidation against indigenous leaders in Brazil, as well as the use of excessive force and criminalisation against these communities.

Front Line Defenders urges the authorities in Brazil to:

1. Guarantee the implementation of the protection measures issed by the National Programme for the Protection of Human Rights Defenders in favour of Cacique Babau, Tonico Benites and Paulino Terena;

2. Drop all charges against Cacique Babau and his brother, and release them, as it is believed they are solely motivated by Cacique Babau's peaceful and legitimate work in defence of human rights;

3. Take all necessary measures, in consultation with the human rights defenders and/or their representatives, to guarantee the physical and psychological integrity and security of Cacique Babau, Tonico Benites and Paulino Terena;

4. Carry out an immediate, thorough and impartial investigation into the threats against Tonico Benites, with a view to publishing the results and bringing those responsible to justice in accordance with international standards;

5. Cease any form of harassment against indigenous rights defenders attending the hearings before the Parliamentary Commission of Inquiry;

6. Guarantee in all circumstances that all human rights defenders in Brazil are able to carry out their legitimate human rights activities without fear of reprisals and free of all restrictions.

On 19 September 2015, indigenous leader and human rights defender Mr Elpídio Pires was shot during an attack against the community of Tekoha Potrero Guasu in the municipality of Paranhos, Mato Grosso do Sul (MS). The attackers were trying to repossess the land where the community resides, that was initially demarcated as indigenous land in 2005 but it has been disputed since then.

They have consistently denounced the violence perpetrated against the Guarani-Kaiowá tribe by sending public letters to national and international press, and by publishing articles in magazines and newspapers. They further denounce the negative economic and social impact resulting from constant attacks, including the destruction of homes and land. In addition, they have actively participated in the struggle for the recognition of indigenous territories and of the ancestral lands of the Guarani-Kaiowá people.

On 19 September 2015, at approximately 5pm, unidentified men carried out an attack against the indigenous communities in Tekoha Potrero Guasu. Several members of the indigenous group were beaten and its leader, Elpídio Pires, was shot and wounded. The human rights defender was taken to hospital in the city of Dourados (MS), where he remains in recovery. This attack followed an incident on 12 September 2015 where two unidentified men driving a pick-up truck inquired about the location of Elpídio Pires' hut.

Prior to this, on 18 September 2015, at approximately 4pm, a group of unidentified armed men carried out a violent attack against another indigenous community, Pyelito kue-Mbarakay, in the municipality of Iguatemi (MS). It is reported that, during the attack, several of the gunmen were looking for community leader and human rights defender, Mr Lide Solano Lopes, and they asked about his whereabouts. The human rights defender managed to escape, but now fears for his safety.

Incidents of persecution, threats and harassment against human rights defenders and indigenous leaders have increased since late August 2015. On 2 September 2015 Tonico Benites, Eliseu Lopes and Genito Gomes were followed by two unidentified men in a car as they returned to Dourados (MS). Upon realising this, they decided to drive towards the police station, at which point the car stopped following them. The following day, 3 September 2015, four unknown individuals arrived at the indigenous community's lands and asking about the whereabouts of Tonico Benites, Eliseu Lopes and Genito Gomes.

Judicial harassment and criminalisation of indigenous rights defenders is also on the rise. Inayê Lopes and Ismarte Martim face criminalisation for defending their communities' rights to their ancestral lands. The human rights defenders could face formal charges of “disobeying legal orders” for allegedly violently resisting eviction orders. In 2005 the land in question was recognised as indigenous ancestral land but, to date, the Supreme Court has failed to rule on a challenge brought against this decision.

Between 29 August 2015 and 19 September 2015, a number of farmers who claim rights to the land attempted to reclaim it by forcibly evicting the indigenous peoples from the ancestral territories of Tekoha Ñanderu Marangatu Guyrakambiy, Pyelito kue and Potrero Guasu. During this time, thousand of members of the indigenous community were violently attacked, and its leaders have been facing attacks and death threats.

The territories of Tekoha Ñanderu Marangatu Guyrakambiy, Pyelito kue and Potrero Guasuwas were demarcated and approved as indigenous land in 2005, a decision that was suspended in the same year by the Federal Supreme Court after the landowners filed an injunction. On 16 September 2015 a federal judge of Ponta Porã re-approved an eviction order for the Tekoha Ñanderu Marangatu territory. The Guarani-Kaiowás have challenged this decision and the area remains under dispute ten years since the demarcation order of the land as an indigenous territory was ordered.

Front Line Defenders strongly condemns the death threats, attacks and harassment perpetrated against human rights defenders and indigenous leaders of the Guarani-Kaiowá peoples, which it believes to be directly linked to their role in the defence of the indigenous community and lands. Front Line Defenders expresses further concern about recent killings of indigenous leaders in Brazil, as well as the use of excessive force, criminalisation and defamation against these communities.