About Thulani Maseko
Status:
Conviction Overturned
About the situation

On 30 June 2015, human rights defender Mr Thulani Maseko, along with journalist Mr Bheki Makhubu, was acquitted and released after Swaziland's Supreme Court found that they had been wrongly convicted. 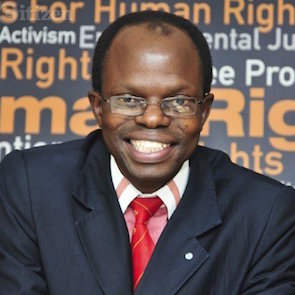 Thulani Maseko is a member of both Lawyers for Human Rights Swaziland and the Southern Africa Human Rights Defenders Network. He is currently serving a two year sentence in connection with articles he wrote for Nation's Magazine, denouncing the lack of judicial independence in Africa's last absolute monarchy. He has routinely criticized the Swazi king's control of the country's courts, and called for a more democratic legal system in Swaziland.

On 30 June 2015, human rights defender Mr Thulani Maseko, along with journalist Mr Bheki Makhubu, was acquitted and released after Swaziland's Supreme Court found that they had been wrongly convicted.

The Supreme Court overturned the High Court's judgement of 25 July 2014, which had sentenced them to 2 years in prison for ''contempt of court''.

Ahead of their first hearing, an international advocacy campaign, #SwaziJustice, was launched seeking the release of the human rights defender and journalist. In March 2015, while serving his sentence in Big Bend prison, Thulani Maseko was transferred to solitary confinement, where he remained for three weeks for writing letters to his supporters. For more information, please read our urgent appeal from 25 March 2015.The acquittal of the human rights defender and journalist comes after delays of the hearing of their appeal by the Supreme Court. A previous hearing scheduled for 8 May 2015 had been indefinitely postponed after the Supreme Court Chief Justice and two other judges were arrested in April 2015 on charges of corruption. Previously, in November 2014, the court allegedly could not hear the appeal because Maseko’s case had not been transcribed.

Maseko continued to write once imprisoned, on several occasions publishing letters in local and international papers. In August 2014, he wrote to United States President Barak Obama ahead of the 2014 United States Africa Leaders Summit, seeking the President's intervention in his case.

Mr. President, greetings from jail cell No. Room D4 of His Majesty’s Correctional Institution (Sidvwashini Prison) Mbabane. I do hope that this my letter finds you in great health.

Mr. President, in the context of Swaziland, dissenting and opposing voices are silenced, harassed and thrown into jail. The system of government is based on one man with all political authority, which is sanctioned by the constitution; this is the supreme law of the land. Section 79 of the 2005 Constitution prohibits the lawful existence and recognition of political parties, which effectively undermines democracy and democratic governance. This management is not only contrary to developments in Africa post-1990, but it is absolutely at variance with international human rights standards and international law.

Shortly after Maseko published his open letter to President Obama, Swazi authorities transferred Maseko to Big Bend Prison, approximately 100km away from his family in Mbabane.

On 17 March 2015, Maseko managed to publish another letter, this time on Okayafrica.com, a website dedicated to African culture. To mark the one-year anniversary of his detention, the human rights defender expressed his appreciation to the “thousands around the world” who continue to support him and his family throughout his incarceration, and reiterated his commitment to human rights advocacy in Swaziland.

Tinkhundla leaders, its supporters, its fans and proponents, may call us whatever names they choose. They shall never conquer our spirits. They may keep us in jail as much as they please, but they can never arrest our ideas. So, in the final analysis, Madiba who inspires us right here in prison, is right when he says: “It is only my flesh and bones that are shut up behind these tight walls. Otherwise, I remain cosmopolitan in my outlook; in my thoughts I am as free as a felon.”

We need to unite around a discussion table to negotiate the birth of a new democratic society, a new and democratic Swaziland. In the words of the great Mahatma Gandhi, we seriously believe in the righteousness of our cause.

We are short of sweet and beautiful words to express thanks to the thousands around the world who have supported us. We cannot be more grateful. The great mentor speaks for us when he says, “We shall never forget how millions around the world joined us in solidarity to fight the injustice of our oppression while we were incarcerated.” Indeed, we draw strength and sustenance from the knowledge that we are part of a greater humanity.

Soon after publication, prison authorities stated that such writings constitute a violation of the prison code. To date, they have refused to provide details of which provisions Maseko's letter violated.

21 October 2014
#SwaziJustice: international campaign for the release of Thulani Maseko and Bheki Makhubu

On November 3, 2014, a hearing in the case is scheduled at the Supreme Court of Swaziland. Ahead of this date, the #SwaziJustice international advocacy campaign has been launched in order to raise worldwide attention and pressure for the release of Thulani Maseko and Bheki Makhubu.

Read the transcript of Thulani Maseko's statement from prison here:

"The thrust of my defense is that I am not in contempt of court, but that the people of Swaziland are treated with contempt and disgusting disregard.

The people of Swaziland have a right to determine and shape their destiny.

If truth be told, this trial is about the prosecution and persecution of the aspirations of the people of this land to determine their own destiny, democratically and freely...

When freedom is taken away, it becomes the onerous and supreme duty of men to reclaim it from the oppressor. For giving up freedom is tantamount to giving away man’s right to dignity. One can have no dignity without his or her freedom. Without our freedom we are a people without a soul.

I am willing to pay the severest penalty, even if it means spending more days, or even more years in jail. It is well with my soul. I accept the penalty with a clean and a clear conscience that I did no wrong.

Human rights are inherent, inalienable, indivisible and inviolable. This is clearly not the case in Swaziland.

It is our respectful contention that the issue here is not and has never been contempt of court... The issue is the abuse of the courts to silence dissenting voices in order to suppress aspirations for democratic change... The people are yearning for freedom,democracy, and justice.

Suppressing ideas never succeeds in making them go way. Of course, they will never go away even if brutal force, arrests and other forms of suppression and repression are used to silence dissent.

I do not for one moment believe that in finding me guilty and imposing a penalty on me for the charge I face, the court should be moved by the belief that penalties deter men from a cause they believe is right. History shows that penalties do not deter men and women when their conscience is aroused.

The path to freedom goes through prison, but the triumph of justice over evil is inevitable. Nothing this Court can do will shake me from my commitment to simple truth and simple justice."