About Rasim Aliyev
Status:
Killed
About the situation

Rasim Aliyev died on 9 August 2015 in a Baku hospital after being severely beaten on 8 August. He had reported receiving continuous threats and intimidation via social media networks for three weeks leading up to his death. 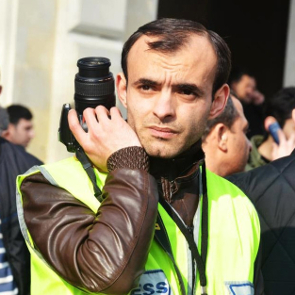 Rasim Aliyev was a journalist, human rights defender and chairman of the Institute for Reporters’ Freedom and Safety (IRFS).

Rasim Aliyev, chairman of the Institute for Reporters’ Freedom and Safety (IRFS), died on 9 August in a Baku hospital after being severely beaten on 8 August. He had reported receiving continuous threats and intimidation via social media networks for three weeks leading up to his death.

Rasim Aliyev’s murder is the latest incident in a vicious cycle of violence against human rights defenders and journalists in Azerbaijan. In the immediate aftermath of the closing of the 2015 European Games in Baku there have been several attacks against human rights journalists and their family members, including threats against Emin Milli and arrest of relatives of Ganimat Zahid.

The Sport for Rights coalition resolutely condemns the brutal murder of Azerbaijani journalist Rasim Aliyev, who died on 9 August in a Baku hospital, after he was severely beaten on 8 August by a group of people. Rasim Aliyev had reported receiving continuous threats and intimidation via social media networks for three weeks leading up to his death.

Azerbaijani authorities have launched an investigation into the attack and detained at least one individual so far. Officials are connecting the attack to a Facebook post from 3 August in which Rasim Aliyev had criticised a football player,. The relatives of the football players are alleged to have been responsible for the beating.

However, prior to the Facebook post in question, Rasim Aliyev had already been receiving threatening messages connected to a series of photos he had posted online showing police brutality and social discontent, such as protesters carrying a banner reading “Resign”. Rasim Aliyev reported receiving a threat stating “You will be punished for these photos”. He publicised the threat on 25 July, and filed a complaint with the police, who failed to take action to protect Rasim Aliyev.

Rasim Aliyev was a board member and employee of Azerbaijan’s leading media freedom organisation, the Institute for Reporters’ Freedom and Safety (IRFS), and was elected as the organisation’s chairman in October 2014. Rasim Aliyev had faced many forms of pressure in his work with IRFS, including being beaten by police in a 2013 incident that was captured in a widely circulated photograph.

Notably, the attack against Rasim Aliyev took place exactly one year from the date IRFS was forcibly closed by the Azerbaijani authorities and IRFS founder and chairman Emin Huseynov was forced into hiding to ensure his own safety, on 8 August 2014.

"We are deeply shocked and saddened by the murder of Rasim Aliyev", said Index on Censorship's senior advocacy officer Melody Patry. "The attack on Rasim takes place in a deteriorating environment for media professionals and civil society in Azerbaijan. Rasim was an independent journalist who kept working after his employer, IRFS, was sealed shut by the authorities. IRFS existed to provide support to journalists like Rasim, especially at a time when threats, intimidation and violence against journalists are commonplace in the country. We call on the authorities to conduct a full and transparent investigation into the attack and bring the perpetrators to justice".

This attack takes place amidst a brutal human rights crackdown in the aftermath of the European Games and in the run-up to November’s parliamentary elections in Azerbaijan. In recent weeks, another Azerbaijani journalist, Berlin-based Meydan TV Director Emin Milli, reported receiving a high-level threat, which was shortly followed by pressure against many of his relatives. Four Meydan TV employees were later prevented from leaving Azerbaijan.

“Further evidence of the on-going efforts of the Azerbaijani authorities to silence all forms of criticism and dissent can be found in the many violations taking place in the cases of human rights defenders Leyla and Arif Yunus and journalist Khadija Ismayilova, who are currently standing trial on politically motivated charges”, said FIDH Honorary President Souhayr Belhassen and OMCT Secretary General Gerald Staberock, whose organisations work together within the framework of the Observatory for the Protection of Human Rights Defenders. The prosecutor has requested staggeringly long prison sentences for the Yunus couple, despite the fact that both have serious and worsening health problems and should be immediately released on humanitarian, if not political grounds.

Sport for Rights calls on the Azerbaijani authorities to conduct a full and transparent investigation into Rasim Aliyev’s murder, and to bring the perpetrators as well as the masterminds behind the crime to justice. The cycle of violence against journalists in Azerbaijan must stop, and those responsible must be prosecuted. Threats against journalists must be taken seriously, and the threatened journalists and their families must be afforded adequate protection. The coalition also calls for the authorities to take concrete steps to improve the broader human rights situation in the country, including the immediate and unconditional release of all jailed journalists and human rights defenders.

Sport for Rights further calls for the international community to maintain its attention on Azerbaijan now that media attention has shifted away from the country following the European Games. As Rasim Aliyev’s murder shows, critical voices are at greater risk now than ever before. The international community must act now to hold Azerbaijan accountable for its human rights obligations and promote much-needed reforms in the country.