About Nicolasa Díaz Ortiz
Status:
Threatened
About the situation

On 23 July 2015, human rights defender Ms Nicolasa Díaz Ortiz received two anonymous telephone calls to her home in which her life was threatened. 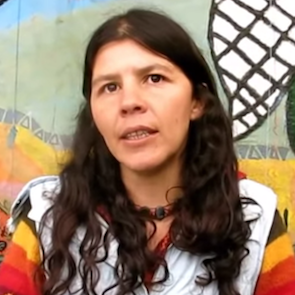 Nicolasa Díaz Ortiz is the executive director of Asociación de niños y Jóvenes Casa Taller las Moyas, a community organisation based in the San Luis Nororiental Chapinero neighbourhood of Bogotá. It was opened to provide a space for children and young people to study or carry out other activities, in light of a lack of social amenities in the area. Nicolasa Díaz Ortiz is also a founding member and board member ofAsociación para la Investigación y Acción Social (NOMADESC) an organisation which aims to give a voice to isolated rural communities at risk of displacement and promote inclusion, community empowerment and development in Colombia.

On 23 July 2015, human rights defender Ms Nicolasa Díaz Ortiz received two phone calls on her land-line phone at 9:43pm and 9:46pm. On the first call, an unidentified man who was distorting his voice cursed at her. On the second call an undistorted male voice directly threatened her life by saying “estamos llamando de la funeraria San Gabriel y queríamos decirle que hemos vigilado su casa y sabemos que se va a morir pronto” (we are calling from the San Gabriel funeral home and we would like to inform you that we have been watching your house and we know that you're going to die soon). The telephone line at Nicolasa Díáz Ortiz's home had been out of service for two and a half months and had only just been repaired on 23 July, the day she received the threatening phone calls.

The human rights defender has faced other risks in recent months. On 16 May 2015 a group of unknown individuals broke into the Casa Taller. The incident was reported to the police, and members of the Comandos de Atención Inmediata – CAI (immediate attention Commands) were dispatched to the address. However, they did not carry out any analysis of the scene, instead advising Nicolasa Díaz to secure the property better and to file a complaint.

Following complaints from several organisations that support Casa Taller, Colonel Raúl Verá Moreno was assigned to the case. On 17 May 2015, the Colonel visited the organisation and made some enquiries, before organising a number of searches on neighbouring properties. That night, at 11:00pm, Raúl Verá Moreno arrived at the home of Nicolasa Díaz, accompanied by two patrol cars and three police motorcycles. They carried a suspect and asked Nicolasa Díaz Ortiz to identify him. This placed the human rights defender at great risk of retribution. It is not clear why police did not carry out an anonymous identification parade at the police station. On 18 and 19 May further searches were carried out on the orders of Colonel Verá Moreno. On 13 June 2015, a complaint was filed against him on basis of various irregularities in the investigation, including exposing the witness to risk of retaliative attacks.

Nicolasa Díaz Ortiz, together with other members of the board of NOMADESC, was awarded precautionary security measures by the Inter-American Commission on Human Rights (IACHR) in 2004 as a result of ongoing threats against them. Despite their attempts to have the precautionary measures implemented by the State, none of the board members are currently receiving any protection.