About Dmitry Tikhonov
Status:
Harassment
About the situation

On 26 October 2015, human rights defender Mr Dmitry Tikhonov learnt that his office, located in his house, in the city of Angren, was burned down on 20 October, while he was away travelling.

His technical equipment and documentation of human rights abuses in Uzbekistan were destroyed, while all other rooms in the house remained untouched. 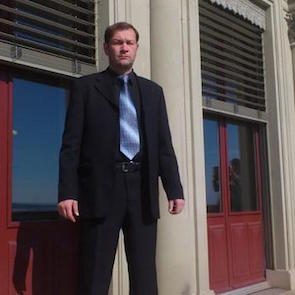 Dmitry Tikhonov is human rights defender and member of the Human Rights Defenders Alliance of Uzbekistan. The Human Rights Alliance works on several human rights issues including torture, access to justice, right to a fair trial and economic and social rights. It is particularly active in organising street actions and advocating for the right to peaceful assembly. Dmitry Tikhonov actively monitors the human rights situation in the city of Angren in the Tashkent region.

On 26 October 2015, he learnt that part of his house in Angren was burned down on 20 October. His office was completely burned down, while the other rooms in the house were not damaged. The human rights defender lost his technical equipment, including laptops, cameras, external hard drives and a mobile phone. Furthermore, all documentation related to human rights cases, including cases of forced labour on cotton fields, were completely destroyed. On top of this, approximately one hundred copies of a handbook on child forced labour, written by Dmitry Tikhonov, were taken from one of the rooms which were not damaged by the fire.

The fire department refused to give any preliminary comments on the reasons for the fire but stated they will provide details of its cause in several weeks.

This accident, which Dmitry Tikhonov believe may be an intentional act of arson, follows a series of acts of harassment, which the human rights defender has been recently exposed to. For his human rights work, in particular monitoring of the forced labour cases, Dmitry Tikhonov has been the target by both state authorities and mass media.

On 19 October 2015, Dmitry Tikhonov learnt that an investigation was opened against him following a complaint about an alleged disorderly conduct, which is punishable under Article 183 of the Administrative Code. The complaint was submitted by three representatives of mahalla (district) committees, which is the state institution responsible for the organisation of citizens weeding cotton fields.

Earlier in September, Dmitry Tikhonov was arrested by police in Angren as he interviewed, took photographs and videos of those forced to work in cotton fields. Following his arrest, he was taken to the Criminal Investigation Unit, where he was reportedly beaten and intimidated while in custody. Dmitry Tikhonov was called “an enemy of the country” by members of the police and district authorities. The human rights defender was subsequently forced to sign a statement denying any wrongdoing by the police. He was released five hours after his arrest.

Furthermore, local newspapers launched a smear campaign accusing him of being a foreign agent and having connections to international human rights organisations. The information, which the newspapers were referring to, is believed to have been obtained as a result of hacking Tikhonov' private electronic correspondence.

On 20 September 2015, Human rights defender Dmitry Tikhonov was arrested by police in Angren city in the Tashkent region as he interviewed and took photographs and video recordings of those forced to work in cotton fields by the authorities. He documented 20 buses carrying teachers, other school staff and industrial workers to the cotton fields in Buka district. Following his arrest, he was taken to the Criminal Investigation Unit, where he was reportedly beaten and intimidated while in custody. He was informed that a chairman from the mahalla (district authority), on the day before his arrest, had reported to the police that Tikhonov had been making photos and interviews with people near the buses.

At the police station, a high-ranking police officer is reported to have struck Dmitry Tikhonov on the face and head with a stack of paper and threatened him with further physical violence. Other police officers, members of the district authorities and a medic who were present denied that this took place. Dmitry Tikhonov was further labelled 'an enemy of the country' by members of the police and district authorities. The human rights defender was subsequently forced to sign a statement denying any wrongdoing by the police. He was released five hours after his arrest.

The previous day, on 19 September 2015, police in the Kuyichirchik district of Tashkent arrested and interrogated Elena Urlaeva along with her husband, her 11-year-old son, and her friend Mr Sherzod Kamchibekov. The family had been invited to visit Sherzod Kamchibekov's farm for the weekend. Upon arrival, Elena Urlaeva had spoken with and photographed several women who informed her that they had been recruited by the district authorities to pick cotton. She also took photographs of the cotton fields. At approximately 6pm, a police officer arrived at Sherzod Kamchibekov's house and arrested Elena Urlaeva, her family and her friend and they were taken to the police station in Krasin village.

At the station, the police read a statement, allegedly from a local farmer, in which it was claimed that Elena Urlaeva had taken photographs of his field without his knowledge. Elena Urlaeva, her family and friend were each subsequently searched and interrogated. They were each breathalysed and the officers claimed that Elena Urlaeva had alcohol in her system, which she denies. The human rights defender and her family were released at 10pm. However, Sherzod Kamchibekov was held in custody overnight. Before his release the following day, he was accused of espionage and informed that he was prohibited from contacting Elena Urlaeva.

The human rights defenders have been subjected to ongoing police harassment as a result of their work to document and report on the use of forced labour in the country. On 31 May 2015, Elena Urlaeva was detained by police and subjected to violence after interviewing and photographing teachers and medical staff forced by Uzbek district authorities to work in cotton fields. However, to date, no charges have been brought against either of the human rights defenders.