About Noemí Méndez
Status:
Intimidated
About the situation

On the morning 12 December 2016, human rights lawyer Ms Noemi Mendez arrived at work to find that the glass entrance door of her office in San Pedro de Macorís had been broken. 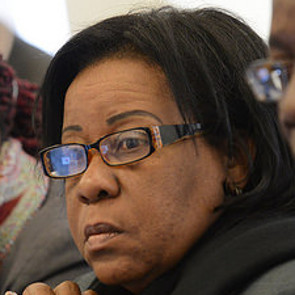 On the morning 12 December 2016, human rights lawyer Ms Noemi Mendez arrived at work to find that the glass entrance door of her office in San Pedro de Macorís had been broken.

According to the human rights lawyer, no valuables were taken, and nothing seems to be missing. The human rights lawyer filed a complaint at the police station the same day. This is the second time that Noemi Mendez’ property has been damaged in the past few weeks, with her car also having been the target of vandalism a month ago.

The human rights lawyer has represented several individuals affected by the Constitutional Court ruling 168-13, from September 2013, which arbitrarily and retroactively deprived generations of people born and raised in the country of their Dominican nationality. In addition to aggravating long standing tensions between the Dominican Republic and Haiti, the ruling gave way to a rise of verbal and physical attacks led by so-called ‘nationalist’ groups against Dominicans of Haitian descent as well as migrants in the country.

When the Constitutional Court first rendered its judgement, a number of human rights defenders, journalists, academics, lawyers, politicians, parliamentarians and other public figures who criticised the decision received threats. The situation has not improved since, with human rights defenders working to overturn the ruling or supporting migrant workers being regularly targeted through smear campaigns, harassment in social media, criminalisation and violent attacks. On 25 September 2016, Mr Genaro Rincón, a human rights lawyer dedicated to defending the rights of Dominicans of Haitian descent in the Dominican Republic, was verbally abused while in a bus by an unknown individual who shouted at him "the Haitian race is the worst in the world”. Genaro Rincón was then pushed off the bus and the attacker threw a cement block at his head, injuring him.

Front Line Defenders is concerned by the attacks and other acts of intimidation against human rights defenders in the Dominican Republic, and considers those acts to be in retaliation for their human rights work advocating for the rights of Dominicans of Haitian Descent. Front Line Defenders condemns the acts of intimidation against Noemi Mendez and calls upon authorities in the Dominican Republic to investigate them and bring to justice the perpetrators, as well as to promptly take steps to address the environment of racism and intolerance that is putting human rights defenders and the communities they defend at risk.

Front Line Defenders urges the authorities in the Dominican Republic to:

1. Take immediate action to safeguard the physical and psychological integrity of  Noemi Mendez  in consultation with the human rights defender;

2. Carry out an immediate, thorough and impartial investigation into the acts of intimidation against Noemi Mendez, with a view to publishing the results and bringing those responsible to justice in accordance with international standards;

3. Guarantee in all circumstances that all human rights defenders in the Dominican Republic are able to carry out their legitimate human rights activities without fear of reprisals and free of all restrictions.