About Abdallah Abu Rahma
Status:
Suspended Sentence
About the situation

On 23 January 2017, Israeli occupation forces arrested human rights defender Mr Abdallah Abu Rahma as he attended the court hearing of Lema Nazeeh and Mohammed Khatib, who were arrested while participating in a peaceful protest against illegal settlement construction in Bab Al-Shams in East Jerusalem, otherwise known as the E1 area/settlement bloc. 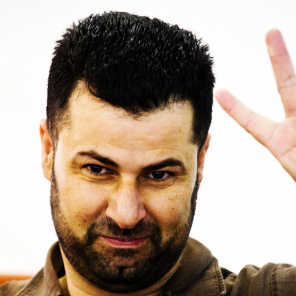 Abdallah Abu Rahma is a secondary school teacher and the head of the Bil’in Popular Committee against the Wall, which carries out activities in protest against the wall constructed by the Israeli authorities and which Abdallah Abu Rahma insists violates the economic, social and cultural rights of the Palestinian people.

On 20 January 2017, Israeli occupation forces arrested human rights defenders Ms Lema Nazeeh and Mr Mohammed Khatib – along with four other peaceful protesters -  near the illegal Israeli settlement of Ma’ale Adumim in the Occupied Palestinian Territory. Israeli forces then went on to ill-treat Lema Nazeeh throughout her four days in detention at Al-Maskubiyyah prison in Jerusalem. On 23 January 2017, Israeli occupation forces also arrested human rights defender Mr Abdallah Abu Rahma as he attended the court hearing of the two aforementioned defenders. Lema Nazeeh and Mohammed Khatib were arrested while participating in a peaceful protest against illegal settlement construction in Bab Al-Shams in East Jerusalem, otherwise known as the E1 area/settlement bloc. The protest was also against US President Donald Trump’s suggested plan to move the US embassy in Israel from Tel Aviv to Jerusalem. Three days after the protest, Abdallah Abu Rahma was arrested on suspicion that he had also taken part in the peaceful protest. All human rights defenders were released on bail, pending trial.

Lema Nazeeh is a deputy chairperson of the Popular Struggle Coordination Committee (PSCC). The PSCC facilitates communication between, and helps to strengthen, the different popular committees in Palestinian villages who struggle against what they call the 'apartheid wall', or ‘security fence’ as Israel refers to it, and who suffer human rights violations as a result of various aspects of the Israeli occupation. Mohammed Khatib is a Palestinian lawyer and board member of PSCC. Abdallah Abu Rahma is a secondary school teacher and the head of the Bil’in Popular Committee against the Wall, which carries out activities in protest against the wall, which Abdallah Abu Rahma maintains violates the economic, social and cultural rights of Palestinians.

On 20 January at around 11.00am, Lema Nazeeh was beaten by Israeli soldiers upon arrest and was taken to Al-Maskubiyyah prison in West Jerusalem – outside of occupied territory. This was carried out in violation of Article 49 of the Fourth Geneva Convention relating to the Protection of Civilians during Times of War, which prohibits the transfer of protected civilians to the territory of the occupying power. The human rights defender was placed in a solitary cell next to cell where several other male detainees were being detained on criminal charges, and kept there even though she was verbally assaulted by some detainees in neighbouring cells . She described the cell as dark and  entirely monitored by video cameras – including the toilet. She was not provided with water to drink or wash and neither was she permitted to sleep for prolonged periods of time. For the entirety of her stay in prison, an Israeli soldier went  into her cell hourly and woke her up by banging loudly on the prison cell bars with a wooden stick. Lema Nazeeh was also forbidden from meeting with her lawyer and was not informed about her judicial proceedings.  She initially was told that  her hearing would be on 22 January, but it was then postponed to 23 January without her being informed.

On 20 January, Israeli forces also arrested Mohammed Khatib after recognising him at the aforementioned protest.  He was held in Ofer prison for four days. Both Lema Nazeeh and Mohammed Khatib were accused of participating in an “illegal” protest after they, along with fellow Palestinian and foreign activists, set up a tent in the Bab Al-Shams area in East Jerusalem  - inside a park in the illegal settlement of Ma’ale Adumim to protest unlawful Israeli annexation of this area. The protesters were then forcibly removed from the tent by Israeli special forces but continued to protest on a road nearby. When they were detained, the two human rights defenders were also accused of entering into “Israel” illegally even though they were in internationally recognised occupied Palestinian territory in East Jerusalem. Their case  was heard in Ofer military court on 23 January, and they were released on bail pending trial. The date remains to be set.

During the military hearing, human rights defender Abdallah Abu Rahma, who was observing the hearing, was removed by Israeli forces. According to Lema Nazeeh, Israeli soldiers detained him for questioning regarding his suspected participation in the 20 January protest. Abdallah Abu Rahma was released on 24 January and is awaiting his trial date.

The human rights defenders took part in the peaceful protest  because of a recent escalation in settlement expansion in occupied Palestinian territory despite the passing of a UN Security Council resolution opposing such expansion. Settlement construction in Bab Al-Shams or in E1  would create an urban bloc between Ma’ale Adumim and West Jerusalem thus fragmenting East Jerusalem further and isolating it from the rest of the West Bank in disruption of the territory’s contiguity as a whole.

Front Line Defenders condemns the continued judicial harassment against human rights defenders  Lema Nazeeh, Mohammed Khatib, and Abdallah Abu Rahma as it believes it to be solely related to their legitimate and peaceful human rights activities in the Occupied Palestinian Territory. Front Line Defenders is further concerned at the pattern of intimidation, harassment and prosecution of human rights defenders by the Israeli occupation forces.

1. Immediately and unconditionally drop all charges against Lema Nazeeh, Mohammed Khatib, and Abdallah Abu Rahma as Front Line Defenders believes that they are solely the result of their legitimate and peaceful work in the defence of human rights in the Occupied Palestinian Territory;

2. Guarantee in all circumstances that all human rights defenders in the Occupied Palestinian Territory are able to carry out their legitimate human rights activities without fear of reprisals and free of all restrictions.