About Den KhamlaePlease send this letter and stand with Den Khamlae.Case History 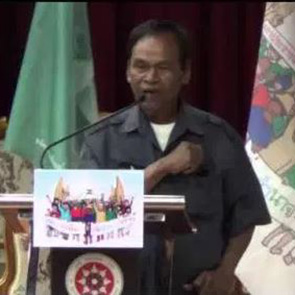 Den Kamlae is a land rights defender from the Khok Yao community, Kon San district, Chaiyaphum province. The community is currently facing forced eviction from the land which they have occupied for forty-five years. Since 2015 Den Kamlae has been leading the network of local villagers who have been trying to re-establish their right over this land. The human rights defender is also a member of Essan Land Reform Network (ELRN), a union of local villagers opposing the Kon San Forest Project. The latter was established by the state-owned Forest Industry Organisation in 1978 and until now has caused significant destruction in part of the Laohai forest area resulting in the eviction of more than one-thousand people from local villages.

On 25 April 2016, the wife and relatives of Den Kamlae submitted urgent appeal letters to the Chairperson of the National Human Rights Commission, the Committee for the Development of the Discovery of the Disappeared and the Identification of Unidentified Bodies and the Central Institute of Forensic Science, seeking their assistance in the search for the human rights defender.

Since his disappearance, his wife, members of the ELRN and the Khok Yao community have been trying to locate the human rights defender and have been combing the forest where he was seen for the last time. There are no grounds to believe that the human rights defender has been killed in a natural disaster or by an animal. Den Kamlae suffered from no known ailment and had no personal disputes with anyone.

On 17 April 2016, Den Kamlae's wife filed a complaint with the Huay Yang Police Station in relation to her husband's disappearance. The police, however, failed to conduct an investigation and made no attempt to help her with the search for her husband. During the first three days of the search, forestry patrol officers from nearby areas joined the villagers in combing the forest area adjacent to the Khok Yao community.

On 10 March 2016, one month before Den Kamlae went missing, forest department officials, military, and other relevant authorities notified villagers from the Khok Yao community that they had eight days to leave the territory they occupied as they had allegedly illegally intruded on forest reserve land. This was not the first attempt by the Thai government and military officials to forcefully evict members of the community.

On 6 February 2015, a joint force of approximately one-hundred officers from the Royal Thai Police, Royal Thai Army and the Department of Forest and District Administration visited people from Khok Yao, demanding they leave the area and destroy all their buildings and crops in eighteen days. The joint forces' operations were carried out on the basis of orders issued by the National Council for Peace and Order in 2015 and 2014. Since the enactment of these orders, at least one-hundred-and-seventy-three communities in nine provinces of the northern region of Thailand have fallen victim to operations of the joint forces.

On 25 April 2013, both Den Kamlae and his wife were convicted, on appeal, for illegal land encroachment, illegal occupation and deforestation. On 28 Aug 2012, the Court of First Instance found both persons guilty of violating Articles 54 (1) and 72 (3) of the Forestry Act, Articles 14 and 31 (1) of the Forestry Reservation Act and Article 83 of the Criminal Act, sentencing them to six months imprisonment and ordering them to leave the forest area they were occupying. Den Kamlae and his wife have appealed their conviction to the Supreme Court, where their case is currently pending.

On 29 February 2010, the Council of Ministers of Thailand adopted exceptional measures granting the Khok Yao community permission to stay temporarily on the lands they were occupying. The decision was adopted after more than twenty years of protests carried out by community members and their appeals to the relevant state authorities with demands to re-establish their right over the land. The dispute originated in 1985-1988, when the Thai government started to implement forest and wildlife protection and conservation policies.

As compensation for the people who were forced to leave their lands, the government promised two hectares of land per person in a different area. It later appeared however, that the allocated territories were already occupied by other individuals. Consequently, the members of the Khok Yao community became landless.

I express grave concern at the disappearance of human rights defender Den Kamlae, which I believe was solely motivated by the peaceful and legitimate work of the land rights defender in Chaiyaphum province. I urge the authorities in Thailand to:

1. Carry out an immediate, thorough and impartial investigation into the allegations of enforced dissapearance of human rights defender Den Kamlae, with a view to publishing the results and bringing those responsible to justice in accordance with international standards;

2. Immediately quash the conviction of Den Kamlae and his wife as I believe that both persons have been targeted solely as a result of the human rights defender's legitimate and peaceful work in defence of land rights in the country;

3. Take all necessary measures to guarantee the physical and psychological integrity and security of family members of Den Kamlae;

4. Guarantee in all circumstances that all human rights defenders in Thailand are able to carry out their legitimate human rights activities without fear of reprisals and free of all restrictions.