Testimony by Ali Idrissa at the 2013 Dublin Platform

Title:
Testimony by Ali Idrissa at the 2013 Dublin Platform

On the 29th of June 2009, Mr. Marou Amadou from CROISADE, the Committee for Independent Thought and Direction for the Safe- guarding of Democratic Advancement, also a member of the ROTAB bureau, was stopped by the police and placed in detention on Judicial Police premises. He was accused of “provocation and disobedience to defense and security forces,” of “plotting against state authority”, of “setting out to demoralise the army” and of “flagrant press crimes”. These accusations came after Mr. Amadou’s proposals were declared during a programme broadcast on the 29th of June on television, when he referred to a declaration in which the army was invited to adhere to the terms of Article 13 of the constitution of Niger, in which it is stated that “no-one is to be expected to carry out an order that is obviously illegal”. Mr. Amadou was freed on the 2nd of July 2009.

On the 9th of August 2009, Mr. Amadou read out a declaration in public on the 10th anniversary of the constitution of Niger in which he denounced the corrupt regime of President Mamadou Tandja and the referendum of the 4th of August 2009, recalling the ruling of the Constitutional Court of the 12th of June 2009 in which TANJA’s referendum was declared illegal. On the 10th of August 2009, he was stopped at around six o’clock in the morning by the Judicial Police for “posing a threat to the safety of the state” and was then placed under a committal order and imprisoned at the Niamey civilian prison. The following day, he was released by the Niamey District Court [Tribunal de grande instance] to whom he was presented in accordance with the procedure for arrest during an offense as it is being committed.

On the same day, this being also on the 10th of August 2009, he was stopped once again by Republican Guard personnel and taken back to the civilian prison at Niamey. The Judicial Police arrested him yet again and accused him of “membership of an illegal organisation”. On the 13th of August, he was charged with “management of an undeclared organisation”. This second incidence of arrest is indicative of the drive to harass leaders of NGO groups. As it happens, there is no legal requirement for organisational groups to declare themselves as such while these organisations are themselves legally and individually recognised.

On the 8th of July 2009, after having granted himself emergency powers, President Tandja modified the Act 2006-24 that deals with the organisation, attribution and workings of the Communication Regulatory Body, awarding its head the power to suspend on a discretionary basis any “press organ that distributes or publishes information that could disturb public order or pose a threat to the safety of the State.”

On the 1st of September 2009, the most senior investigating magistrate gave a ruling in which Mr. Marou Amadou was freed on a provisional basis. On that same day, the Public Prosecutor lodged an appeal against this ruling. On the 15th of September 2009, the Grand Jury at the Niamey Appeal Court backed the request for provisional freedom that was granted by the most senior investigating magistrate on 1st September 2009, which is still blocked by the Niamey Public Prosecutor’s office at this time. 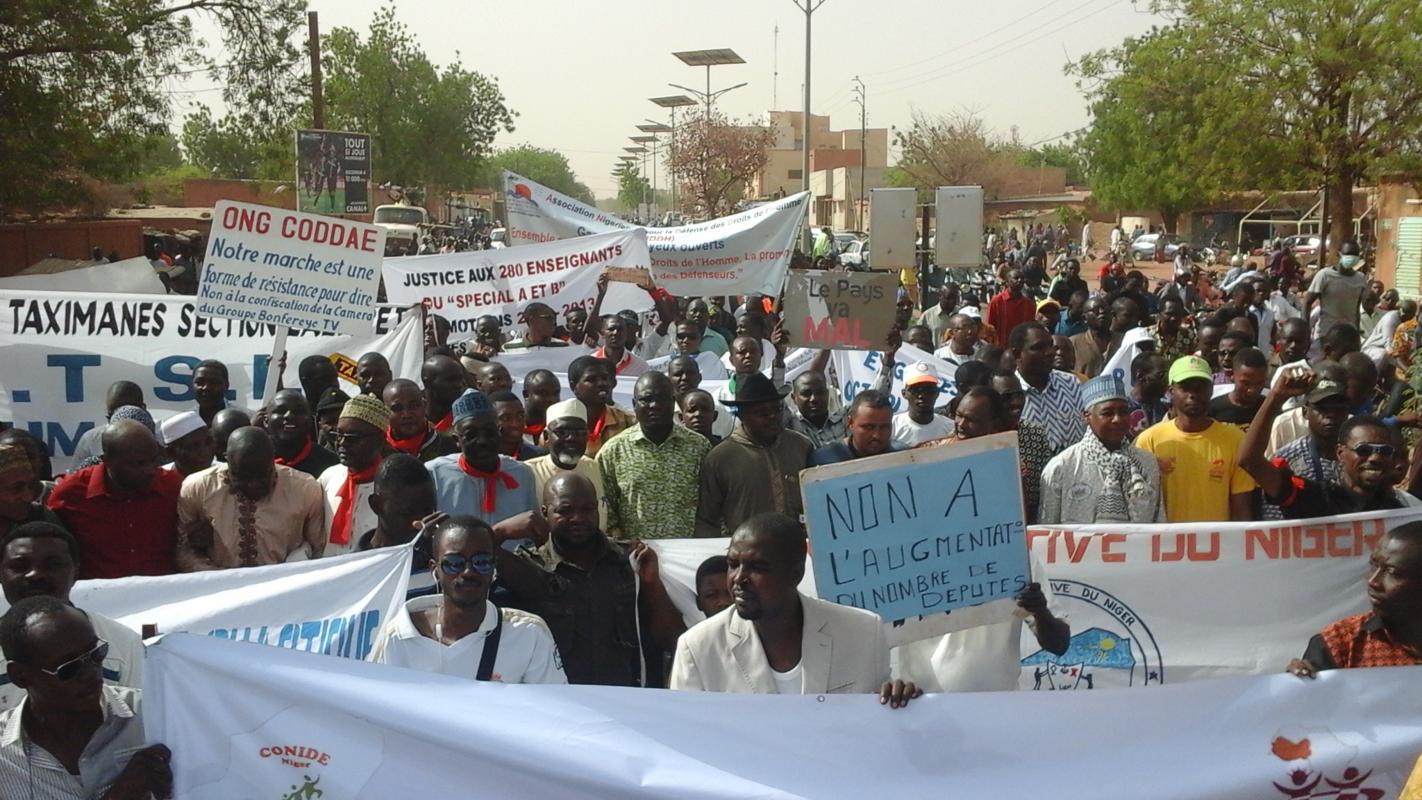 On the 10th of August 2009, he was stopped at around six o’clock in the morning by the Judicial Police for “posing a threat to the safety of the state” and was then placed under a committal order and imprisoned at the Niamey civilian prison.