I am a lawyer from Papua. In 2002 I began my human rights work when I joined Legal Aid Papua in 2002. Later, in 2008, I joined the Civil Society Coalition for the Enactment of Law and Human Rights, a coalition that consists of NGO activists, lawyers and church activists in Papua. I am a Litigation Coordinator with the Coalition, working with both national and international NGOs.

Our advocacy for Papuans is related to the demands of the people in Papua who wish to separate from Indonesia as a result of mass human rights violations and discrimination. The main issue of Papua dates back to the integration history of Papua to Indonesia in July 1969 – a process that is believed to have been undemocratic and not in accordance with International Law.

The Coalition has handled many cases of violence towards Papuans, including three big cases: 1. human rights violence in Abepura, Wasior and Wamena, 2. a case of 90 political prisoners whose right to freedom of expression was violated by the State, and 3. six cases of violence conducted by police and military.

As a result of the work of the Coalition, people's access to pursue justice which was not available to them beforehand is now available. There is also documentation on the violations and there is a network of victims established.

In doing advocacy work, I have personally faced a lot of challenges, both physical and psychological, including but not limited to;

Stigma – my advocacy work is considered as part of the fight to support the movement to separate from Indonesia.

Threats and intimidation – my family and I have received many threats, both directly and indirectly. My activities are monitored by intelligence and the vehicle I use was stolen. I received intimidation threats during a trial process and I was denied the right to defend my client as I was considered to be disturbing the legal process.

Criminalisation – I was reported to the police twice with the accusation of opposing the ruler while I was defending my client. Due to this accusation and to avoid prison, I temporarily relocated from Papua to a safer place and only returned to Papua when the accusation was withdrawn.

To improve the safety of human rights defenders in Papua there is a need for the following;

Oversight of the violations of human rights committed by the state.

The establishment of local, national and international networks which work continuously to advocate for HRDs who are at risk and in dangerous situations.

Support is needed for HRDs and their families when they are doing their job (safe housing, safe communication, insurance to cover healthcare, including provisions for mental health).

There should be an emergency fund made available to families and HRDs in times of escalated risk.

Reviewing all the human rights cases mentioned above, I believe the advocacy for civil society, as well as protection for the HRDs, are the two essential elements.

Protection for HRDs can be done by pushing regulation, establishing advocacy networks for HRDs, as well as increasing the protection afforded the families and HRDs when they are in dangerous situations. 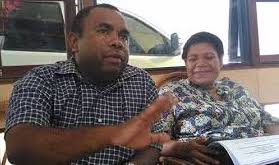 Our advocacy for Papuans is related to the demands of the people in Papua who wish to separate from Indonesia as a result of mass human rights violations and discrimination.