On 26 August 2021, just hours before a hearing to propose the evidence to be used in the defendants' trial, their legal team was notified that the Criminal Chamber of the Supreme Court of Justice had granted a six month extension of preventive detention at the request of the Tocoa Prosecutor's Office despite repeated calls for the defenders’ release. The decision took place despite the 26 November 2020 resolution of the United Nations Working Group on Arbitrary Detention which established in its opinion number 85/2020 that the deprivation of liberty of the Guapinol environmental defenders is arbitrary.

The resolution by the group of experts urged the State of Honduras to take urgent measures to guarantee their immediate release and to grant them the effective right to obtain both compensation and the necessary reparation for the violation of their rights, and to adopt the appropriate measures against those responsible for the violation of their rights. Until date, the State of Honduras has not responded.

On 17 August 2021, more than 75 civil society organizations addressed a letter to the President of the Honorable Supreme Court of Justice and the Criminal Chamber of the Supreme Court of Justice of Honduras asking them to consider declaring the extension imprudent and to order a change of precautionary measure so that the environmental defenders could continue with the legal proceeding against them in liberty, guaranteeing their rights to due process and to a fair and impartial trial. The State did not respond.

The undersigned organisations reiterate their concern for the criminalisation based on false accusations against the defenders who are members of CMDBCP, as we believe that the judicial prosecution and prolonged arbitrary detention is a reprisal for their work in defense of the environment. In addition, we are concerned about the misuse of pre-trial detention, which appears to be intended to limit the work to defend human rights and create a deterrent effect on other members of the organization.

The undersigned organizations stand in solidarity with the environmental and human rights defenders of CMDBCP and their families who have suffered for two years the implications of their arbitrary detention. We are attentive to the trial, which has been set by the Trujillo Sentencing Court for December 1-10, and call for an open and transparent judicial process, including live virtual transmission and in-person observation. In the meantime, we call on the Supreme Court of Justice to resolve the pending legal appeals related to the arbitrary detention of the defenders in order to guarantee the end of their arbitrary pre-trial detention.

Sisters of Mercy of the Americas – Justice Team, Washington, DC 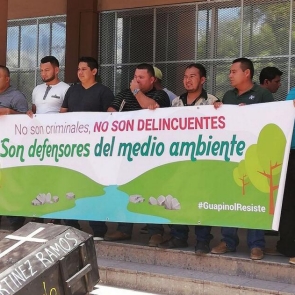