As a result of systemic discrimination, expropriation of land and the continued misuse of Chile’s Anti-Terrorism Law against the Mapuche people—a practice which has been condemned by the Inter-American Court of Human Rights—Mapuche human rights defenders face an increasing struggle for the protection of their native land and traditional way of life, as many of their leaders find themselves facing criminalisation, imprisonment and torture.

Werkenes Mapuche (spokeswomen) from the Araucanía region face a distinctive from of rights violations and violence. As Mapuche women, they are often in the front line of protests, and face both state repression and gender-based violence.

Nora Ñancul and Gricel Ñancul are women human rights defenders and Werkenes who defend the rights of the Mapuche people in the Likankura autonomous Lof. They are known for their commitment to the revitalisation of Mapuche identity, knowledge and customs and for their defence of indigenous land rights and encouragement of the Mapuche peoples’ spiritual and social reconnection to their land. Nora Ñancul and Gricel Ñancul have spent most of their lives fighting for the recuperation of indigenous land occupied by State or private interests, including some occupied by the company Forestal Mininco at CollipulliCommune in the Malleco Province in Araucanía. The community of Likankura represented by the Ñancul sisters have denounced the company for a violation of land rights and have affirmed that they have no other option except for the pursuit of peaceful land requisitions in order to once again provide enough sustenance for their community.

On 10 September 2020, officials from the Chilean Investigative Police violently detained Nora Ñancul and Gricel Ñancul near their home, without presenting a warrant. Police officers physically and verbally assaulted the women defenders and their young children while they were working on their land close to their home located in CollipulliCommune, Malleco Province. Before they were detained and brought to the police station in Angol Commune, both mothers and their children were pushed to the ground by police officers who dragged through the mud for several metres, leaving them with multiple injuries. The Ñancul sisters believe the police violence is in retaliation for their role as land defenders, as well as for their relationship with their brother, also a land defender, who is in hiding for fear of facing charges. They also view the harassment as a response to their role as indigenous mothers, “extending Mapuche generations”, something which is highly depreciated by the police and state authorities. Days after the attack, Nora and Gricel Ñancul filed a complaint against the officials from the Chilean Investigative Police who they accuse of torture.

While Gricel Ñancul was released hours after her arrest, her sister Nora Ñancul remained detained throughout the night, bound at the hands and feet. While in detention, police officers continued to beat her and use misogynistic and racially discriminatory language against her. Both Nora Ñancul and Gricel Ñancul are facing a number of charges including “threats and violence against police”. Crimes against police officers tend to be brought before military courts and are frequently investigated within the Anti-Terrorism Law.

Mapuche resistance against large scale illegal deforestation is mostly concentrated within the Araucanía region, a sacred place for the Mapuche with a rich landscape comprised of ancient forest. However the region is also one with the highest rates of multidimensional poverty in Chile. The country’s economic model based on privatised resource extraction—backed by a high degree of militarisation—has played a central role in the disenfranchising of Mapuche people, principally through violations of indigenous, environmental and land rights.

Since Augusto Pinochet’s dictatorship (1973-1990), the Chilean state has been actively pursuing policies that prioritise the expropriation of land and capitalisation of land-based resources over the heritage and ancestral ownership of Mapuche indigenous people. Militarisation and the presence of forestry companies such as Forestal Mininco, is strongly linked to the obstacles Mapuche human rights defenders face when defending their land. The military provide physical support to companies carrying out land grabs or displacing Mapuche people. Displacement is usually accompanied by the criminalisation of Mapuche human rights defenders, and facilitated by a justice system that discriminates against their indigenous peoples’ rights and normalises racism and repression.

Front Line Defenders is deeply concerned by the ongoing criminalisation of Mapuche land defenders and gender-based violence against women Mapuche defenders, who peacefully advocate against the illegal operations of forestry companies on indigenous land. Front Line Defenders is concerned that militarisation in Mapuche territory has intensified violence against indigenous defenders, and ineffective State action has facilitated the continuation human rights violations and oppression perpetrated against Mapuche by police. Finally, Front Line Defenders urges the Chilean authorities to refrain from the criminalisation of Mapuche human rights defenders and to make efforts to re-enforce the recognition and protection of their land and indigenous rights. 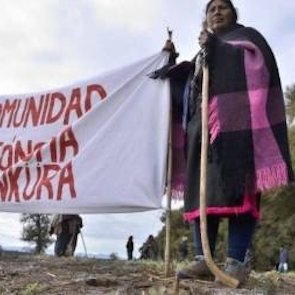 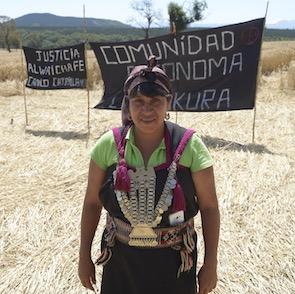