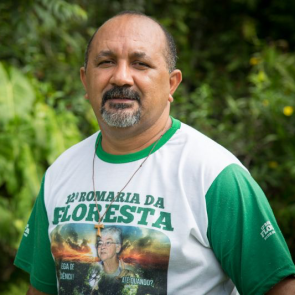 If I did something wrong, it was only to help put the land back in the hands of the worker

Father Amaro Lopes de Souza is a human rights defender who seeks to preserve the Amazon forest and promote democratic access to land by rural workers. He works alongside the Pastoral Land Commission (Comissão Pastoral da Terra - CPT), linked to the Catholic Church, who peacefully assists in agrarian conflicts. Father Amaro is known as the successor of missionary Dorothy Stang in the struggle for agrarian reform and dignity for workers in the region.

He is currently criminalised due to false reports of farmers connected to the killing of Dorothy Stang, in which he spent 92 days in prison (between 4 March and 18 June 2018), and today faces alternative measures that include the prohibition to celebrate masses and to meet with more than five people. At the time of his arrest, CPT computers were also seized. Father Amaro Lopes de Souza has been accused of criminal association, threat, extortion, trespassing and money laundering, and now lives under death threats by the family involved in the crime against Dorothy Stang, as well as by local militias.

Like Dorothy Stang, Padre Amaro supported the implementation of Sustainable Development Projects (Projetos de Desenvolvimento Sustentável, PDS) in the region, which have 80% of their area dedicated to preservation of the forest. One example is the Mata Preta Settlement Project in Anapu, where 260 families now live and work in a territory that was previously in the hands of one single person.

Father Amaro has acted in the defence of environmental rights and access to land in Anapu since 1989. "If I did something wrong, it was referring people to the Public Prosecutor's Office, the Public Defender's Office and other institutions to seek their rights, because many times people were threatened, killed, and nothing was done about it. (...) We denounced this," he says.

In 2018, Father Amaro received the João Canuto Award for Human Rights from the Movimento Humanos Direitos (MHuD). In his speeches, he recalled with regret the killing of 16 peasants in Anapu in the last three years, asking human rights defenders in Brazil for "patience, resistance and unity".