The work of human rights defenders in Albania is not openly restricted by the government, yet HRDs face several difficulties. Human rights defenders are regularly involved in the development of policies and legislation related to human rights issues. These consultations, however, often fall short of true cooperation, because there are no formal mechanisms in place at the central and local level.

Widespread corruption and impunity in Albania create a serious obstacle for human rights defenders. In July 2016, Albania’s government passed a reform of the judicial sector, meeting one of the conditions of the European Union for accession talks. The reform was viewed by many HRDs as essential to ensuring that human rights and freedoms are upheld. If adequately implemented, this reform could help overcome some of the key problems of Albanian legal system, including extreme corruption, long duration of process and deficiencies in the implementation of court rulings.

Another problem is the poor economic situation in the country, that leads to NGOs having difficulties in accessing financial resources and being dependant on donor assistance. The fiscal regime governing the non-profit sector remains unclear and also negatively affects the work of civil society organisations.

Freedom of assembly and association has generally been respected. In recent years, there has been a number of demonstrations organised by former political prisoners and human rights defenders advocating for disability rights. Freedom of expression, even if formally guaranteed by the Constitution, is partially limited in practice. There is widespread self-censorship among journalists, partly due to the risk of being accused of defamation and having to pay high fines. Business and political interests continue to influence the independent media, and there has been pressure on critical journalists and media outlets.

The treatment of vulnerable groups remains to be highly problematic in Albania. Discriminatory attitudes and practices prevail against the Roma and Egyptian people as well as LGBTI communities, hindering the work of human rights defenders in these areas. The trans community and trans HRDs, in particular, faces persistent violence, which often goes unpunished and without investigation. When carrying out their work, women human rights defenders also face social and cultural barriers. 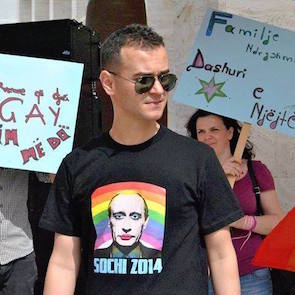