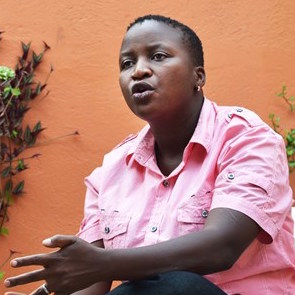 Sandra Ntebi is an LGBTI activist who works with the Ugandan LGBT Security Committee and Sexual Minorities Uganda (SMUG), among other organisations. On a daily basis, she works to report threats against her colleagues in the Ugandan LGBTI community, and manages a hot-line to support LGBTI people who are at risk of attack, to find alternative and safe accommodation.

At approximately 11 pm on 4 August 2016, during an LGBTI Pride event at Venom Night Club in Kabalagala, Kampala, police entered the venue, disrupted the event, harassed attendees, locked them inside the venue for one hour, and confiscated personal property, including mobile phones, without a warrant. Additionally, it is reported that police officers sexually harassed trans-gender persons who were in attendance by groping them and taking photos without their consent while threatening to publish the photos to reveal their identities. The police alleged that the event was held in violation of the principles of the Public Order Management Act of 2013. Sandra Ntebi attempted to speak with the police officers after their arrival, however she was arrested with 15 other event organisers and defenders, and brought to Kabalagala police station where all 16 were detained overnight. During her detention, Sandra Ntebi was beaten by the police officers and denied access to her lawyer.

After being released from detention without charge on 5 August 2016, Sandra Ntebi started receiving harassment from members of the police department and civilians by phone, text, and in-person. The Minister of State for Ethics and Integrity, Hon. Rev. Fr. Simon Lokodo, visited the police station soon after the 16 were released and demanded that the police bring them back to the station. Since then, members of the police department incessantly harass Sandra Ntebi to appear at the police station via phone calls and texts, although there is no formal request from the department for her to appear at the station. Her lawyers have advised her not to go to the station.

On the 16 August 2016, a coalition of human rights organisations held a press conference concerning the police disruption of the events on 4 August 2016 at the Fairway Hotel in Kampala. As Sandra Ntebi was driving home from the press conference, another driver bumped into her car, causing damage to it. The person got out of their car and demanded that the human rights defender go to the police station. Sandra Ntebi refused to go to the police station, and returned home without making any more stops.

Front Line Defenders recognises the harassment faced by Sandra Ntebi as part of a larger trend in Uganda of harassment and threats of human rights defenders and a crackdown on civil society and on the LGBTI community in particular. Front Line Defenders is concerned that the harassment of Sandra Ntebi is politically motivated by her legitimate and peaceful work for LGBTI rights, and urges Ugandan authorities to uphold their responsibilities in protecting human rights as outlined in international documents such as the ICCPR to which they are a signatory.

Front Line Defenders urges the authorities in Uganda to:

1. Take all necessary measures to guarantee the physical and psychological integrity and security of Sandra Ntebi;

2. Carry out an immediate, thorough and impartial investigation into the threats and harassment Sandra Ntebi is facing as well as into the ill-treatment she received while in police detention, with a view to publishing the results and bringing those responsible to justice in accordance with international standards;

3. Guarantee in all circumstances that all human rights defenders in Uganda are able to carry out their legitimate human rights activities without fear of reprisals and free of all restrictions.