About María Magdalena Cuc Choc
Status:
Released on Bail
About the situation

On 20 January 2018, Maria Magdalena Cuc Choc was released on bail. The judge ordered her to pay bail of 5,000 Guatemalan Quetzals (US$682), to remain within the Izabal department, and to sign in regularly at a local tribunal.

On 17 January 2018, María Magdalena Cuc Choc was arbitrarily detained in the city of Puerto Barrios, El Estor, Izabal, ahead of a trial where she is charged for aggravated trespassing, threats and illegal detention. 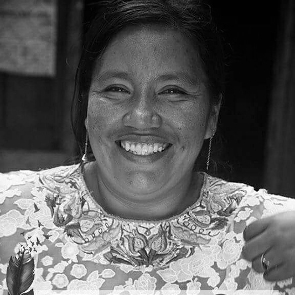 María Magdalena Cuc Choc, is a woman human rights defender and community leader of the Maya-Q’eqchi’ peoples in eastern Guatemala, Izabal department. Since 2004, she has worked to document and denounce environmental and land rights violations caused by several Canadian mining companies such as Skye Resources, HMI Nickel Inc. and Hudbay Minerals. María has worked particularly closely with communities whose rights have been violated by killings, gang rapes and illegal evictions.

On 17 January 2018, María Magdalena Cuc Choc was arbitrarily detained in the city of Puerto Barrios, El Estor, Izabal, ahead of a trial where she is charged for aggravated trespassing, threats and illegal detention.

On 17 January 2018, María Magdalena Cuc Choc was arbitrarily detained, without presentation of an arrest warrant, by National Civil Police officers (Policía Nacional Civil- PNC) in the city of Puerto Barrios, after she served as a Q’eqchi’- Spanish translator for the Q’eqchi’ community of Rubel Pek in a judicial hearing. María Magdalena Cuc Choc was taken to Puerto Barrios’ Peace Court (Juzgado de Paz de Puerto Barrios), where she was notified that on 25 January 2017, the Criminal Court had issued arrest warrants requested by the Prosecutor’s Office for María Magdalena Cuc Choc and other community leaders, on charges of aggravated trespassing, threats and illegal detention. This request was in relation to a complaint submitted by “LISBAL” company to the Prosecutor’s Office, against the Maya-Q’eqchi’ people of Chabil’ Ch’och’ indigenous community. The company claimed that some community members, including María Magdalena, invaded the company’s property located in Izabal, Guatemala.

There are concerns over the close links that LISBAL may have with the authorities and judiciary of Guatemala. The company is owned and controlled by former state officials such as former minister Alejandro Sinibaldi Aparicio and former president Otto Pérez Molina. Human rights defenders and leaders of the indigenous community are subsequently at heightened risk of repression and judicial harassment for their work in the promotion and protection of land rights.

On 19 January 2018, Puerto Barrios’ Penal Court held a hearing on María Magdalena Cuc Choc’s case where the judge ordered her release on bail for 5000 quetzales (approximately €575) for the duration of the trial. She is forbidden to leave the department of Izabal and must appear in court once a month over the next six months during the pre-trial investigation. María was transferred to Puerto Barrios’ Penitentiary Center and released later that night.

This arrest follows a pattern of judicial harassment and criminalisation of indigenous, environmental and land rights defenders in Guatemala and in particular, in Izabal. Front Line Defenders has reported on a number of similar cases such as, Abelino Chub Caal, Juan Eduardo Caal Suram, and Jerson Xitumul Morales.

Front Line Defenders is deeply concerned at the judicial harassment of woman human rights defender María Magdalena Cuc Choc, as well as the ongoing criminalization of indigenous, environmental and land rights defenders as they work to protect their land and livelihood in Guatemala

2. Cease targeting all human rights defenders in Guatemala and guarantee in all circumstances that they are able to carry out their legitimate human rights activities without fear of reprisals and free of all restrictions including judicial harassment.