On 18 June 2017, the police in Malaysia’s Kuala Lumpur International Airport detained human rights defender Han Hui Hui for four hours and interrogated her for more than an hour, before deporting her back to Singapore. Han Hui Hui went to Malaysia to attend a human rights event. 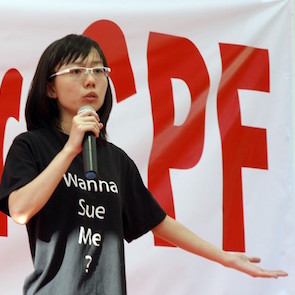 Han Hui Hui is a blogger and a human rights defender. She uses her blog and social media to highlight shortcomings in social services, especially in health and housing, as well as to raise public awareness of human rights violations in Singapore. She has participated in the organisation of awareness programmes and events on children's rights, the right to freedom of expression and democracy. As well as this, she has facilitated training camps on democracy for youth activists. Her outspokenness has made her the target of judicial harassment  by the Singapore government over the years, and she is banned from organising events in the country since September 2014.

On 18 June 2017, police in Malaysia’s Kuala Lumpur International Airport detained human rights defender Han Hui Hui for four hours and interrogated her for more than an hour, before deporting her back to Singapore. She later learned that she was sent back to Singapore under section 8(3)(k) of Malaysia’s Immigration Act, which deals with “undesirable immigrants”.

On 18 June 2017, around 17h, Han Hui Hui landed in Kuala Lumpur to attend a human rights event in the country, when she was detained by the airport police for four hours. After being interrogated on the purpose of her trip, she was told she was blacklisted from Malaysia and she had to board a flight back to Singapore that same evening. Although she was not immediately given an official motive for her deportation, police officers told Han Hui Hui that she was deported for being a "national threat" that would affect "bilateral relationship" between the two countries. The Malaysian police later notified members of the legal teams of Amnesty International and Suaram – a Malaysian human rights organisation – that she had been deported under section 8(3)(k) of the Immigration Act of Malaysia, applying to “any person who, in consequence of information received […] from any government, through official or diplomatic channels, is deemed by the Minister to be an undesirable immigrant”. Han Hui Hui had been invited to attend a youth exchange programme on democracy and human rights organised by Innovation for Change and Suaram from 19 to 23 June 2017.

This is the first time Han Hui Hui is prevented from entering Malaysia. She attended several human rights events there in the past years. It is believed that her deportation is due to pressure exerted by the Singaporean government on the authorities in Malaysia, in order to prevent her participation in the human rights programme. This is the first time a Singaporean citizen is deported from Malaysia.

Front Line Defenders condemns the deportation of human rights defender Han Hui Hui, which it believes was solely motivated by her peaceful and legitimate work for human rights in Singapore.

Front Line Defenders urges the authorities in Singapore to:

1. Immediately and unconditionally remove all restrictions on the free movement of Han Hui Hui and cease all further forms of harassment against her, as it is believed that these measures are not only solely related to her legitimate human rights activities but, furthermore, constitute a direct violation of the rights of Han Hui Hui;

2. Guarantee in all circumstances that all human rights defenders in Singapore are able to carry out their legitimate human rights activities without fear of reprisals and free of all restrictions.