About Yi Liu
Status:
At work
About the situation

On 6 August 2015 four people who identified themselves as police officers arrived at the home of the Executive Director of the Wenshe Centre for Human Rights Education (WCHRE), Mr Liu Yi, and questioned him for forty minutes about his activities with the organisation. This harassment is the latest in an ongoing campaign against civil society organisations and human rights defenders in China. 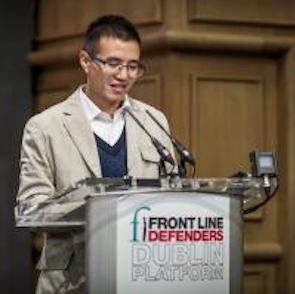 Liu Yi is the Executive Director of the WCHRE, a small organisation dedicated to increasing awareness of human rights in China. It provides information about international standards, the UN mechanisms, opportunities for human rights defenders, as well as translating reports on human rights abuses around the world. The NGO also provides legal assistance to ethnic communities in Sichuan province. In 2008 Liu Yi co-founded Human Rights Campaign in China, a domestic NGO which documents human rights abuses throughout the country. In 2009 Liu Yi was sentenced to 18 months in prison as a result of his work with this NGO.

On 6 August 2015 four people who identified themselves as police officers arrived at the home of the Executive Director of the Wenshe Centre for Human Rights Education (WCHRE), Mr Liu Yi, and questioned him for forty minutes about his activities with the organisation. This harassment is the latest in an ongoing campaign against civil society organisations and human rights defenders in China.

At around 3pm on 6 August, four individuals arrived at the home of Liu Yi and demanded access to his house. Although they identified themselves as police officers, only one was in uniform and they refused to show any legal documentation or identification. Once inside the house, the individuals proceeded to collect the identification cards of Liu Yi and his mother-in-law, who was helping him care for his ten month old baby at the time.

Following this, two of the individuals told Liu Yi that they were from the Shangliu Public Security Bureau of Chengdu City and that they wanted to know more about the activities of WCHRE. They specifically questioned him about assistance that WCHRE had provided to a group of Tibetan traders who had lost their income as they were no longer permitted to run businesses on the main streets of Shuangliu county and at its bus station. WCHRE helped the traders apply for information from the Shuangliu local government. Liu Yi was also questioned about the organisations legal status and how it raises funds. WCHRE is registered as a business in China as it is almost impossible for human rights organisations to register as NGOs in the country. The questioning lasted for 40 minutes, during which time Liu Yi reiterated that WCHRE was not a political organisation but rather one focused on raising awareness of human rights issues in China.

Earlier that day, at around 1:40 p.m., Liu Yi had received a call on his mobile phone from an individual demanding that he go to Tanghu Police Station for questioning. When the individual refused to provide his real name, his police identity number or the reason for which Liu Yi was requested to go to the police station, the human rights defender stated that he would not go. He was told that he would regret it. The previous day Liu Yi's wife had received a phone call from an unidentified individual who told her that her husband should appear at Tanghu Police Station for questioning, but without giving a reason for this.

This harassment against WCHRE conforms to a pattern of increasingly severe measures being taken against rights-focused NGOs in China. Over the past 18 months, the staff of a number of NGOs have been threatened, harassed, detained and imprisoned and some NGOs have been forced to temporarily suspend their work or shut down altogether. Furthermore, a draft of a so-called Foreign NGO Law currently under consideration by the Chinese leadership threatens to make it even more difficult for domestic NGOs to operate. Under these draft laws it would be illegal for Chinese NGOs or individuals to receive funding from overseas organisations which are not registered in China. It is all but impossible for Chinese NGOs working on “sensitive” issues, such as defending the rights of the marginalised, to obtain domestic funding, while it is unlikely that a foreign organisation funding such NGOs would find a government body willing to sponsor it in order to allow it to register in China, as dictated by the draft law.