About Sardar Mushtaq Gill
Status:
Brother Shot
About the situation

On 1 April 2015, the brother of human rights defender Mr Sardar Mushtaq Gill, was attacked and shot in the Lahore area of Pakistan. 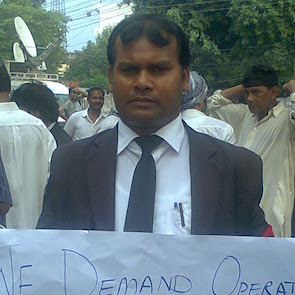 Sardar Mustaq Gill is the National Director of Legal Evangelical Association Development (LEAD) which is based in the province of Punjab. LEAD is a non-government organisation that provides legal aid to marginalised people and defends the rights of religious minorities in Pakistan. Sardar Mustaq Gill has been campaigning against the use of blasphemy laws to target minorities.

On 1 April 2015, the brother of human rights defender Mr Sardar Mushtaq Gill, was attacked and shot in the Lahore area of Pakistan.

The shooting took place at 12.45 PM Pakistan time following threats made against Mushtaq Gill's brother, Mr Pervaiz Gill, on the same day. The brother of the human rights defender suffered a bullet wound to his lower back, and was rushed Jinah Hospital, Lahore, where it was removed. Mushtaq Gill has now requested police protection for himself and his family.

The shooting continues a history of threats and attacks against Sardar Mushtaq Gill and his family, made as a result of his active human rights role. On 9 August 2014, his home was shot at by three men whilst Mushtaq Gill's younger brother stood outside with with two friends. A neighbour was injured in the attack and the shooters remain unidentified. On 2 November 2013, gunshots were fired in an act of intimidation on the street outside the human rights defenders home, following threats made against Mushtaq Gill. In July 2013, around six members of the extremist group Ahle Sunnat Wal Jammat came looking for Sardar Mushtaq Gill at his home. This followed events in June 2013, when Sardar Mushtaq Gill was held at gunpoint by three armed men who threatened him with dire consequences, reportedly in relation to his human rights advocacy through LEAD, and in particular his work defending Christian women.

On 2 November 2013, gunshots were fired in the street outside the home of human rights defender Mr Sardar Mushtaq Gill in Pattoki Tehsil, Kasur District, Punjab Province. In recent months, Sardar Mustaq Gill has been intimidated by various means, including violent threats.

On 2 November 2013, at around 6.35pm, gunshots were heard on the street outside the home of Sardar Mustaq Gill. The human rights defender, who was not at home, was instructed via SMS by his wife to stay away and remained out of the area for fear of his safety. It is reported that Sardar Mustaq Gill's brother found bullet shells on the street afterwards. On 3 November, the human rights defender informed his brother to make a complaint at a local police station. Sardar Mustaq Gill is currently living in a secure location due to fear for his safety.

In June 2013, Sardar Mushtaq Gill was held at gunpoint by three armed men who threatened him with dire consequences, reportedly in relation to his human rights advocacy, particularly his work defending Christian women who were paraded naked in Kasur district. Subsequently, in July 2013, around six members of extremist group, Ahle Sunnat Wal Jammat, came looking for Sardar Mustaq Gill at his home.

Lawyers affiliated with LEAD have previously been harassed and threatened as a result of their human rights work. On 4 June 2013, LEAD's lawyers petitioned the Lahore High Court to cancel the bail against individuals who had attacked Christian communities in Joseph Colony in March 2013. The lawyers feared that new attacks against the communities might occur if the suspects were to be released. They were reportedly threatened by unknown individuals to withdraw the petition and were consequently unable to appear in court for fear of attacks.