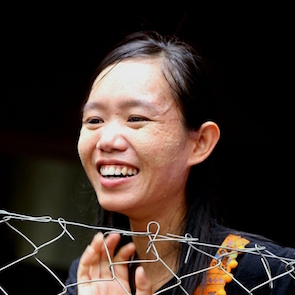 Phyoe Phyoe Aung is the General Secretary of the All Burma Federation of Student Unions (ABFSU). The ABFSU is a student organisation that has been heavily involved in protests since November 2014 against the National Education Bill, enacted by Parliament on 30 September 2014. Student organisations and independent experts have been highly critical of the law, which they claim restricts academic freedom. The ABFSU was one of a number of organisations that presented a list of ten demands to the Parliament for an amended statute, which include the adoption of ethnic languages in school curricula and the right to form student and teacher unions.

On 11 April 2016, the Tharawaddy Court in Bago region released the General Secretary of All Burma Federation of Student Unions (ABFSU) Ms Phyoe Phyoe Aung together with her husband following the announcement of the presidential pardon. Charges against other leaders of the ABFSU, including Ms Po Po, Mr Kyaw Ko Ko and Mr Nanda Sitt Aung, were also withdrawn and they have been released. All Burma Federation of Student Unions is a student organisation that has been heavily involved in protests against the National Education Bill since November 2014, which they claim restricted academic freedom when enacted by Parliament on 30 September 2014. Members of the ABFSU insist on the adoption of ethnic languages in school curricula and the right to form student and teacher unions.

Prominent activists, such as Ms Nilar Thein, a member of 88 Generation Peace and Open Society Group, a former students group established to work for peace and to promote and protect civil society in Myanmar, and the labour and land rights defender and chairperson of Myanmar's Farmers Union, Ms Su Su Nway, have also been pardoned and released.

On 8 April 2016, the Tharawaddy Court dismissed the cases of sixty-nine student human rights defenders and their supporters, who had been on trial since the police crackdown on peaceful student protests in 2015. Most were accused of violating the Peaceful Assembly Law and faced charges under articles 143, 145, 147 and 505(b) of Myanmar's Penal Code, which concern unlawful assembly, rioting, incitement, and causing harm to a public servant. Some were facing charges from various townships where the education reform protests occurred and some were already serving their sentences when pardoned by the President. Their release took place over the course of several days.

The Presidential power to grant pardon is based on section 204(a) of the Constitution and article 401(1) of the Code of Criminal Procedure that gives the President the authority to release prisoners at his or her discretion but stipulates that they can be returned to prison at any time to serve out the remainder of their sentence. Those human rights defenders who had been arrested but not yet convicted were pardoned based on section 494 of the Code of Criminal Procedure, which allows cases to be dropped even after a trial has begun. The reliance on the mentioned articles allowed the President to bypass the otherwise required approval of his decision by the National Defence and Security Council, comprised primarily of representatives of the old military government, and therefore quickly implement his decision to grant pardon.

On 12 March 2015 at approximately 11:00 pm, two human rights defenders, leaders of the All Burma Federation of Student Union (ABFSU), Ms Han Ni Oo and Mr Thiha Win Tin, were detained in an ongoing crackdown on student protesters. Ms Phyoe Phyoe Aung, also a member of ABFSU, was detained on 10 March 2015.

Han Ni Oo and Thiha Win Tin were arrested with at least three other people in the home of a reporter in Rangoon’s Ahlone Township. They have reportedly been transferred to Pegu Division police. No charges have yet been brought against the two human rights defenders, and they have not been allowed access to their legal representatives.

Two days before, Phyoe Phyoe Aung was arrested at a protest against the National Education Bill in Letpadan, along with approximately 126 other students. The human rights defender is also being held in Pegu Division, has not yet been charged and has not had access to her legal representative. The students had been attempting to march from Letpadan, Pegu Division, to Yangon when they were beaten and seriously injured by riot police and armed groups.

The students were attacked when they attempted to dismantle police blockades preventing them from continuing their march. The same day, students in Yangon held protests in reaction to the crackdown, which were also quashed by police and members of government-sponsored youth groups. Five days previously, students protesting the same law at the Sule Pagoda in Yangon were also severely beaten and arrested.

On 3 March 2015, students in Letpadan had attempted to resume their march and the Burmese authorities deployed over 300 police officers, leading the approximately 100 students in Letpadan to stage a sit-in. The march had been suspended temporarily since a draft amendment bill – the result of negotiations held between authorities and student organisations – was agreed on 11 February 2015. The agreed bill had been presented to Parliament on 16 February 2015, but the government presented a separate amendment bill at the same time that did not comply with the students' demands. Discussions on both bills took place in February 2015, but no resolution was reached, leading to the resumption of protests.