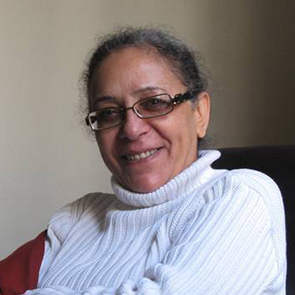 Magda Adly is the Director of the Nadeem centre and coordinator of the programme to support women victims of violence. The Nadeem Center for the Rehabilitation of Victims of Violence and Torture, established in 1993, is the only specialist clinic in Egypt that is dedicated to treating victims of torture and trauma. It provides support and resources to victims of police violence and sexual violence, as well as their families. It also organises awareness campaigns and it documents cases of ill-treatment, torture and death inside jails or police stations.

The Cairo-based El Nadeem Centre is an independent Egyptian NGO founded in 1993 and dedicated to combating torture and providing support for its victims. The Centre provides medical care for victims of torture, takes their cases before various bodies and issues monthly summary reports on instances of torture, death and medical negligence in police custody in Egypt. The NGO also runs a program addressing violence against women which provides counseling along with two 24 hour hot-lines, and has worked to provide assistance for refugees.

On 17 February 2016, officials from the Azbakeyya district authorities ordered the employees of Al Nadeem to leave the premises of their office in Cairo, on the basis of an order from the Director of the Ministry of Health's Free Treatment Directorate declaring the closure of the Centre. The administrative closure order (35/2016) was based on a decision by the Ministry of Health signed on the 8 February 2016 “for breaching licence conditions”, and stamped by the Cairo district authorities on 15 February 2016.

A lawyer for El Nadeem Centre, who was at the office when the order for closure was presented, convinced the delegation from the Azbakeyya district authorities to postpone the implementation of the order pending a visit to the Ministry of Health to allow for a discussion on the underlying reasons for the order. On the following day, the Centre sent an official letter to the Minister of Health outlining their concerns, including the absence of a previous inspection of the Centre in accordance with Article 11 of Law 51 of 1981, the absence of previous notification of any irregularities before the receipt of the closure order, as well as the absence of a notification concerning its administrative closure which would have enabled the Centre to lodge an appeal. On 20 February 2016, a lawsuit was filed by the lawyer of the Centre at the Administrative Court of First Instance aiming at suspending the implementation of the administrative order.

Several NGOs and associations, including the Syndicate of Doctors in Egypt, have criticised the closure order and expressed their solidarity with Al Nadeem Centre.

Front Line welcomes the sentencing of Mr Ahmed Anter Ebraheem to six year's imprisonment for physically assaulting human rights defender Dr Magda Adly. However, Front Line expresses concern that the police officer accused of ordering the attack, whose identity is known to Front Line, has not been charged. Magda Adly is a medical professional and the director of the El Nadim Centre for the Rehabilitation of Victims of Violence, an organisation that assists victims of torture and violence through research, training, counselling and raising public awareness.

On 28 March 2009, the Fifth Section of the Dhamanhur Criminal Court sentenced Ahmed Anter Ebraheem to six years' imprisonment for physically assaulting Magda Adly. Neither Ahmed Anter Ebraheem nor his lawyers attended the trial. Ahmed Anter Ebraheem, an employee of the Egypt's Central Security Apparatus, had been apprehended red-handed by the public at the time of the assault when he was claimed to be off duty. He claimed that he was acting under the instructions of a chief investigator at Kafr El Dawwar police station. His family told members of the El Nadim Centre that he had been summoned to Kafr El Dawwar police station and ordered to hit Magda Adly and rob her bag. He was reportedly threatened with criminal charges if he refused to follow these instructions. He and his sister, who testified in support of the claims of his family before the prosecutor, had reportedly been detained at Kafr El Dawwar police station previously. Since the attack, there have been many delays in the case and the prosecutor has been changed many times.

Whilst Ahmed Anter Ebraheem has been sentenced to six years' imprisonment, the officer from the Kafr El Dawwar police force who allegedly ordered the assault and has also been accused in other torture cases was reportedly transferred to the central police magistrate in what appears to be a promotion. No charges have been brought against him although Magda Adly has filed a civil lawsuit against him for planning the assault.

The assault took place on 30 April 2008 in Kafr El Dawwar in the district of Beheira. After having testified in favour of detainees who had reportedly been tortured by intelligence officers of the Kafr El Dawwar police force, Magda Adly became the victim of a knife attack. The attacker robbed Magda Adly's handbag and assaulted her severely in the presence of many people, including the head of intelligence of the Kafr El Dawwar police force. Magda Adly's shoulder was broken, she suffered head injuries, and she lost consciousness for 30 minutes. Despite this, she was interrogated for four hours on the day of the incident by the prosecutor. Meanwhile, the confession of her attacker was not registered. The handbag which was robbed reportedly contained evidence relating to her case. The car of Dr Mona Hamdy, a psychiatrist at the El Nadim Centre, which had been parked outside the building, was also vandalised.

Front Line believes that the attack and mugging against Magda Adly was related to her legitimate work in the defence of human rights, in particular her work to defend the rights of victims of torture. Front Line is concerned that the case has not been thoroughly investigated and that officials involved in the assault and possible acts of torture have not faced charges.

On 30 April 2008, Dr Magda Adly was reportedly attacked with a knife by a police officer in a courtroom in Kafr El Dawwar, in the district of Beheira, while she attended the hearing of Sobhy Mohamed Hussein and his sons Ahmed and Mohamed. She had visited them in police custody the previous day where she observed that they had been subject to torture. In addition, the members of their family had given her their blood-stained clothes testifying to physical abuse at the time of their arrest. Dr Magda Adly presented these clothes to the judge during the hearing.

Dr Magda Adly was attacked by a police officer as she left the courtroom. She suffered a broken shoulder in the attack, as well as injuries to the head and she lost consciousness for thirty minutes. The police officer then attempted to escape but was prevented and taken into custody. He later admitted that he was following the orders of Ahmed Maklad, an intelligence officer who was implicated in the allegations of torture and ill-treatment against the three men. The hearing established that the detention order against Sobhy Mohamed Hussein and his sons would be extended. Mostafa Hussein, a psychiatrist at the El Nadim Centre, believes that the arrest and torture of Sobhy Mohamed Hussein and his sons, in particular Ahmed Mohamed Hussein, may be related to their refusal to work as informers for the police.

During the hearing, the car of Dr Mona Hamdy, another psychiatrist at the El Nadim Centre, which was parked outside the courtroom, was vandalised.

Front Line believes that the attack against Dr Magda Adly is related to her legitimate work in the defence of human rights, in particular her work to defend the rights of victims of violence and torture. Front Line is concerned for the physical and psychological integrity of Magda Adly, as well as that of all members of the El Nadim Centre.