About Elpídio Pires
Status:
Assassination Attempt
About the situation

On 19 September 2015, indigenous leader and human rights defender Mr Elpídio Pires was shot during an attack against the community of Tekoha Potrero Guasu in the municipality of Paranhos, Mato Grosso do Sul (MS). The attackers were trying to repossess the land where the community resides, that was initially demarcated as indigenous land in 2005 but it has been disputed since then. 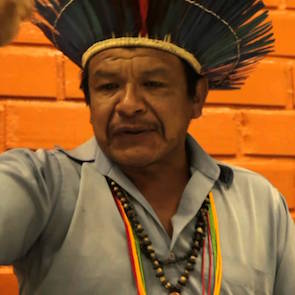 On 19 September 2015, indigenous leader and human rights defender Mr Elpídio Pires was shot during an attack against the community of Tekoha Potrero Guasu in the municipality of Paranhos, Mato Grosso do Sul (MS) through which the attackers tried to repossess the land where the community resides. This episode followed a series of attacks, threats and harassment directed towards six other indigenous leaders and human rights defenders of the Guarani-Kaiowá people, Messrs Tonico Benites, Eliseu Lopes, Ismarte Martim, Lide Lopes, Genito Gomes and Ms Inayê Lopes.

They have consistently denounced the violence perpetrated against the Guarani-Kaiowá tribe by sending public letters to national and international press, and by publishing articles in magazines and newspapers. They further denounce the negative economic and social impact resulting from constant attacks, including the destruction of homes and land. In addition, they have actively participated in the struggle for the recognition of indigenous territories and of the ancestral lands of the Guarani-Kaiowá people.

On 19 September 2015, at approximately 5pm, unidentified men carried out an attack against the indigenous communities in Tekoha Potrero Guasu. Several members of the indigenous group were beaten and its leader, Elpídio Pires, was shot and wounded. The human rights defender was taken to hospital in the city of Dourados (MS), where he remains in recovery. This attack followed an incident on 12 September 2015 where two unidentified men driving a pick-up truck inquired about the location of Elpídio Pires' hut.

Prior to this, on 18 September 2015, at approximately 4pm, a group of unidentified armed men carried out a violent attack against another indigenous community, Pyelito kue-Mbarakay, in the municipality of Iguatemi (MS). It is reported that, during the attack, several of the gunmen were looking for community leader and human rights defender, Mr Lide Solano Lopes, and they asked about his whereabouts. The human rights defender managed to escape, but now fears for his safety.

Incidents of persecution, threats and harassment against human rights defenders and indigenous leaders have increased since late August 2015. On 2 September 2015 Tonico Benites, Eliseu Lopes and Genito Gomes were followed by two unidentified men in a car as they returned to Dourados (MS). Upon realising this, they decided to drive towards the police station, at which point the car stopped following them. The following day, 3 September 2015, four unknown individuals arrived at the indigenous community's lands and asking about the whereabouts of Tonico Benites, Eliseu Lopes and Genito Gomes.

Judicial harassment and criminalisation of indigenous rights defenders is also on the rise. Inayê Lopes and Ismarte Martim face criminalisation for defending their communities' rights to their ancestral lands. The human rights defenders could face formal charges of “disobeying legal orders” for allegedly violently resisting eviction orders. In 2005 the land in question was recognised as indigenous ancestral land but, to date, the Supreme Court has failed to rule on a challenge brought against this decision.

Between 29 August 2015 and 19 September 2015, a number of farmers who claim rights to the land attempted to reclaim it by forcibly evicting the indigenous peoples from the ancestral territories of Tekoha Ñanderu Marangatu Guyrakambiy, Pyelito kue and Potrero Guasu. During this time, thousand of members of the indigenous community were violently attacked, and its leaders have been facing attacks and death threats.

The territories of Tekoha Ñanderu Marangatu Guyrakambiy, Pyelito kue and Potrero Guasuwas were demarcated and approved as indigenous land in 2005, a decision that was suspended in the same year by the Federal Supreme Court after the landowners filed an injunction. On 16 September 2015 a federal judge of Ponta Porã re-approved an eviction order for the Tekoha Ñanderu Marangatu territory. The Guarani-Kaiowás have challenged this decision and the area remains under dispute ten years since the demarcation order of the land as an indigenous territory was ordered.