About Félix Díaz
Status:
Threatened
About the situation

In response to his peaceful defense of human rights, both Félix Díaz and his family have experienced threats, harassment, and attack. He son has been hospitalized multiple times, and in January 2013, Félix Díaz's nephew, Daniel Díaz, died as a result of a cranium fracture. The official investigations considered that the fracture was “probably” caused by an attack. 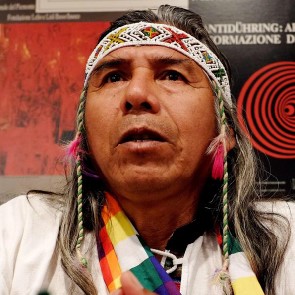 On 29 November 2013, Ms Amanda Asijak, the wife of human rights defender and Qom indigenous leader, Mr Félix Díaz, was assaulted outside her home while she was fetching water at approximately 11pm. The unknown individual was carrying a knife, and he fled when Amanda Asijak's cousin shouted from nearby to warn her. Amanda Asijak reportedly received a minor injury to the abdomen. Félix Díaz is the leader of the Comunidad Qom Potae Napocna Navogoh in La Primavera, in Northern-East Argentina.

Previously, in the early hours of 27 November 2013, Félix Díaz's 16-year-old daughter, Jorgelina Díaz, was assaulted in a knife attack. An unknown individual reportedly grabbed her outside the house as she was returning from the toilets. The attacker cut off thirty centimetres of her hair and cut her T-shirt, but he fled when her mother, Amanda Asijak, came outside the house after hearing her shouts for help. She was taken to Laguna Blanca hospital for treatment for minor injuries.

Moreover, Félix Díaz's 21-year-old son,Abelardo Díaz, has been threatened on a number of occasions. On 3 May 2013, Abelardo Díaz and his friend were brutally attacked by a group of 30 people. On 28 June 2012, a number of people carrying blades threatened to cut Abelardo Díaz's throat. On both occasions, the human rights defender's son required hospital treatment. In January 2013, Félix Díaz's nephew, Daniel Díaz, died as a result of a cranium fracture. The official investigations considered that the fracture was “probably” caused by an attack.

Félix Díaz is facing criminal charges for “resistance to authority” and “stealing weapons”. The charges relate to an incident during a protest in 2010. The Qom community was protesting against a provincial government decision to build a department of the University of Formosa on land which they claim belongs to the community. In the clashes that ensued, a police officer and a member of the Qom community were killed. Félix Díaz says that these charges are a blatant attempt to criminalise members of the Qom community.