About Li XiaolingPlease send this letter and stand with Li Xiaoling.Case History 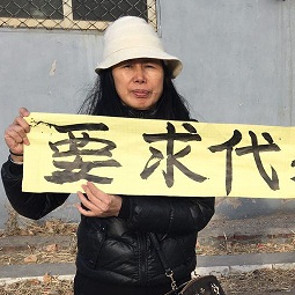 Li Xiaoling has worked for years to support and raise awareness for Chinese petitioners. She has also spent years campaigning for Chinese prisoners, advocating for better conditions inside China’s detention facilities. In May 2017, during preparations for China’s “One Belt One Road” summit meeting, Beijing authorities forced Li Xiaoling to leave her home in Beijing and return to her birth province, Guangzhou.

The defender took advantage of her forced return to Guangzhou to follow up on a legal issue; a local court wished to retract a document it had issued to Li Xiaoling approving a suit she had filed against local Guangzhou authorities. When court officers attempted to force the defender to return the document, Li Xiaoling called local police. When local police arrived, they took the side of the court, assisting court officers to recover the document and then forcing Li Xiaoling to spend the night in a Guangzhou detention centre.

During the evening, Li Xiaoling suffered a severe ophthalmic emergency and immediately informed detention centre officials, requesting to be taken immediately for medical treatment. The officers ignored the defender’s requests and refused to let her leave the detention centre. When Li Xiaoling was finally able to visit a hospital almost 8 hours later, doctors were only able to salvage a small percentage of the defender’s vision.

After returning to Beijing, Li Xiaoling took a series of photos in the vicinity of Beijing’s Tian’anmen Square, commemorated the 28th anniversary of China’s Tian’anmen Massacre and protested her treatment by Guangzhou authorities. She was detained early the next morning, under suspicion of “picking quarrels and provoking troubles,” a charge frequently used against activists in China. Along with Li Xiaoling, Beijing police also detained, under the same charge, Li’s associates Zhou Li, Bu Yongzhu, Liang Yankui, Li Xuehui, Quan Jianhu, and the young daughter of another human rights defender, solely because of their affiliation with Li Xiaoling. On 5 June, Zhao Chunhong, a Beijing activist who had been sharing information about the detentions on social media, was also detained by authorities.

1. Immediately drop all charges against Li Xiaoling and her fellow detainees;

2. Immediately and unconditionally release Li Xiaoling and her fellow detainees;

3. Ensure that the treatment of Li Xiaoling and her fellow detainees, while in detention, adheres to the conditions set out in the ‘Body of Principles for the Protection of All Persons under Any Form of Detention or Imprisonment', adopted by UN General Assembly resolution 43/173 of 9 December 1988;