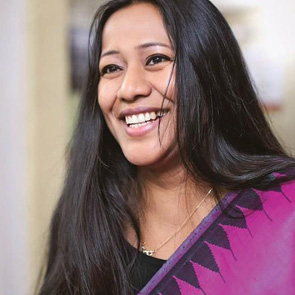 On 12 May 2017, heavily armed Manipur police officers entered Binalakshmi Nepram’s family home in Imphal, in the Northeastern state of Manipur. The human rights defender was away from home at the time and her elderly parents were asked several questions about her in an intimidating manner. She has since refused to disclose her location for fear of being targeted.

Binalakshmi Nepram is a human rights defender, an advocate for gender equality and a writer. In 2007, in order to help women who are affected by gun violence in Manipur, Binalakshmi Nepram launched the Manipuri Women Gun Survivor Network (MWGSN). She is also leading work in India on the right to life by addressing anti-personnel landmines, cluster bombs and the international Arms Trade Treaty. She is the recipient of several national and international awards for her efforts to rehabilitate women suffering oppression and sufferers of armed conflict in Manipur and Northeast Region.

On 12 May 2017, at approximately 1.30pm, armed personnel from the Manipur state police entered Binalakshmi Nepram’s family home in the state’s capital Imphal. In her absence, her elderly parents were asked about her whereabouts in an intimidating and threatening manner. Binalakshmi Nepram is now staying in an unknown location, claiming she fears for her life. It is suspected that she is being targeted for helping re-open a case filed by the family of Irom Roger, the victim of a road rage incident involving current Chief Minister Biren Singh’s son, Najay Singh, in 2011.

After the incident, several people with ties to the political establishment in Manipur started a smear campaign aimed at tarnishing the image of Binalakshmi Nepram’s human rights work in the state. They also called her efforts to ensure justice for Irom Roger’s family a “political conspiracy to topple the government of Manipur” in messages left on her Facebook page.

I express concern at this recent act of intimidation of human rights defender Binalaksmi Nepram’s family members, which I believe is solely motivated by Nepram’s peaceful and legitimate work for human rights in Manipur state.

1. Immediately cease all further harassment of Binalakshmi Nepram and her family;

2. Take all necessary measures to guarantee the physical and psychological integrity and security of Binalakshmi Nepram;

3. Cease targeting all human rights defenders in India and guarantee in all circumstances that they are able to carry out their legitimate human rights activities without fear of reprisals and free of all restrictions including judicial harassment.