Time to act: Protect defenders who speak up against business impact on people and planet

On Human Rights Day, the UN Working Group on Business and Human Rights together with the UN Special Rapporteur on the situation of human rights defenders and a group of civil society organizations1 are highlighting a key message from the recent UN Forum on Business and Human Rights (Geneva, 25-27 November 2019): that the international community must take concrete actions to prevent attacks against human rights and environmental defenders who put their lives at risk to protect those affected by business activities.

This issue was one of the key items on the agenda of the recent UN Forum on Business and Human Rights (Geneva, 25-27 November) and a joint session by the Working Group, the Special Rapporteur and civil society organizations. The need for action was also the resounding message of the “Zero Tolerance” declaration issued by a range of defenders and NGOs prior to the Forum.

As documented by the UN Special Rapporteur on human rights defenders and NGOs, there have been more than 2000 such attacks since 2015 - ranging from lawsuits, arrests and detentions, to death threats and killings. Those raising human rights concerns about agribusiness, infrastructure projects and extractive industries, especially indigenous defenders and communities, have been particularly affected.  Women human rights defenders face the additional burden of violence inside and outside the home and are attacked because of who they are and what they do – challenging power and traditional gender norms.

As highlighted at the UN Forum, many of the main drivers of these attacks, as well as the recommendations on how to address them, are well understood by now: the fundamental issue is the lack of effective state protection of the environment, labour rights, land rights, indigenous peoples’ rights, livelihoods and cultures and the human rights of defenders, manifested in weak regulatory frameworks and lack of enforcement of existing laws and international norms, including free, prior and informed consent. 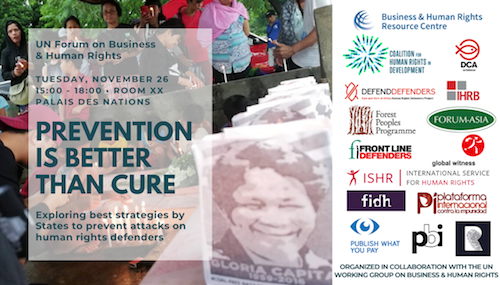 Speakers at the Forum stressed that the UN Guiding Principles on Business and Human Rights, which provide the authoritative global standard for the respective duties and responsibilities of states and business to prevent and address business-related human rights impacts, require that states and companies protect human rights defenders who raise concerns about business activities. At the event, recent positive initiatives taken by states, investors and companies were highlighted:

However, while such developments are promising, a lot more is needed, and in particular, all states need to do more to address drivers of attacks. This includes strong legal protection of human rights, including  land, labour , and indigenous peoples’ rights, and laws to recognize the role of defenders, mandating international financial institutions as well as  bilateral development finance institutions to create appropriate preventative and protection mechanisms to address attacks, reprisals and criminalization of defenders , as owners of these institutions, and introducing mandatory corporate “human rights due diligence”, that recognizes the need to address risks to defenders. There is a growing expectation for companies to exercise human rights due diligence and adopt a zero tolerance approach on reprisals and attacks on defenders not only in their own operations but also when they are linked to such attacks through their value chain and business relationships.

In the words of the signatories of this statement:

Marion Mondain, on behalf of Publish What You Pay: “Human rights defenders who speak up for indigenous peoples and other affected community members about the negative impact of land grabbing, large-scale extractives projects and environmental degradation, are the ones who are most likely to face attacks.”

Ana Zbona on behalf of the Business and Human Rights Centre: “Human rights defenders are vital actors in deliberative processes and often step in, in the absence of meaningful and sufficient protection of these rights by state actors – demanding compliance, holding them to account, providing a system of checks and balances, playing the role of inspection.”

Anita Ramasastry, on behalf of the UN Working Group on Business and Human Rights: “The UN Guiding Principles on Business and Human Rights already provide a clear framework to protect human rights defenders in the context of business. They are intrinsically linked to states’ international obligations and commitments to protect fundamental rights and freedoms and the goals of sustainable development. The Guiding Principles also clarify that when states fail in their duty, companies nevertheless have a responsibility to prevent and address attacks against defenders linked to their own operations and business relationships.”

Joint conclusion: “It is high time for all actors, states, businesses and investors in particular to understand that defenders are not enemies, but essential allies who will help to create a better and safer future for our planet and for all of us.”