Since the beginning of the military coup on 25 October 2021, Sudanese women human rights defenders (WHRDs) and peaceful protesters have been facing growing violations. An internet blackout which has been ongoing since then has increased the risks faced by WHRDs in Sudan and severely restricted their efforts of monitoring and documenting the violations committed by the military and security forces against human rights defenders and civilans in Sudan. Women’s rights groups are working in the context of a complete closure of civil space and restrictions in movement and communication. WHRDs in Sudan are facing an unprecedented crackdown as the coup leaders are targeting journalists, members of resistance committees, union leaders, lawyers, students and civil society activists.

During and after the protests in several neighborhoods in Khartoum and other cities, videos of Sudanese women being beaten by members of the Rapid Support Forces (RSF) and other security forces reflected the amount of violence exhibited against women on the streets. Women protesters were beaten and subjected to verbal abuses by the joint forces. On the first night of the coup, military forces raided the dorms of female students of Khartoum University. These young women were beaten, verbally abused and forced to evacuate the dorm in the middle of the night. One of the students said: "We were shocked by the soldiers carrying guns and sticks and beating us while looting our belongings. They verbally abused us and ordered us to evacuate the dorms. We didn't know where to go as the internet was cut off and we were not able to contact our families. It was a night of horror for all of us."

Siti Alnfor Ahmed Bakr, a 24 year old nurse and WHRD, was killed on 17 November 2021 during protests in Bahry. She was fatally shot in her chin by security forces. Dozens of women protesters were injured during Wednesday protests against the coup. There were 9 women protesters arrested in Khartoum and transferred to the Omdurman women’s prison. According to the emergency laws, they are to remain in prison for one week without trial and clear charges. Additional two women protesters were detained in Madani in Al Jazirah state. The violations against peaceful protesters during 17 November 2021 march included arrests of medical professionals and raids on hospitals and civilians' homes. Neighborhoods in Northern Khartoum were put under siege, and ambulances were prevented from entering the area to evacuate injured protesters. Local communications and electricity were cut off in Khartoum for hours.

Seven people were killed and dozens of women were injured during the protests on which took place on 13 November 2021. Remaz Hatim, a 13 year old girl was shot with a bullet in her head while she was standing in front of her house. She died in the hospital on 14 November 2021 as a result. In Nayala, South Darfur, at least 12 women were arrested during the protests, and another 6 women were reported to be detained in Omdurman.

Women in Sudan are currently facing rapidly growing militarisation of the state in daily life. The Women’s rights movement in the public space is threatened by the heavy deployment of troops around Khartoum and all over Sudan. Working women, especially street vendors, are living under constant fear of harassment and violence while working on the streets. A women street vendor said “We are intimidated by the numbers of soldiers on the streets, we do not feel safe to work early morning or in the afternoon anymore”.

Women’s peace and security in Sudan is under significant threat with the increasing deployment of armed forces in different cities and the control of movement by the military, including checkpoints and constant closure of bridges and roads, and beating and sexual harassment on streets. As a result, Sudanese women's freedom of movement was restricted for the last 3 weeks. Women in conflict areas and displacement camps are facing increased threats of sexual violence with the absence of protection and support services in these regions. The restriction of movement and shutdown of the internet is hindering women's access to information, health care and protection from sexual violence.

Dozens of women protesters were injured during the protests on 30 October 2021 due to the excessive use of force by the joint forces including police, RSF and the military. Among them were two women in Omdurman and three women in Alfao town in Al Qadarif State, Eastern Sudan. In Omdurman, WHRD Anisa Digna was injured with a bullet in her shoulder, and Taysir Ahmed was injured with a tear gas canister to her leg. In a statement made on 6 November 2021, the Doctors Committee announced “many of those injuries are in critical condition and some with a permanent disability.”

The joint forces have arrested several resistance committee members in the last weeks. A woman member in the resistance committee in Khartoum was detained for 3 days from 25 to 27 October 2021. She was released after being threatened not to continue her activism. Sudanese women activists outside Sudan reported threats to and questioning of their families in Sudan.

Three women union activists of the Khartoum water authority were arrested on 4 November 2021, including the chairwoman of the Steering Committee for the Workers of the Khartoum State Water Authority, Rasha Al-Mubarak, and another two union women activists, Asmaa Osman and Huda Khidir. Sawakin Ishaq, a member of the Zalinji resistance committee of Central Darfur, was arrested, badly beaten and verbally abused by security forces on 30 October 2021.

Amna Almaki, governor of River Nile State has been under house arrest since 26 October 2021. She was one of the first two women governors in Sudan’s history. She received several threats during her detention from members of the former regime. She remains at serious risk of mistreatment as reports from recent days have confirmed she has been transferred to military intelligence detention.

In Alfao in Al Qadrif State, three women human rights defenders and protesters, including Tahlil and Qawarir AbdAlrahaman, were arrested by the joint forces in the town. On 9 November 2021, Dr. Nazeifa Awad of the Central Doctors Committee and two other WHRDs were arrested during protests in Alobied city of North Kordofan. Dr. Nazeifa Awad reported being sexually harassed by security officers during her arrest.

Moreover, the WHRD MENA Coalition for Women Human Rights Defenders and North Africa documented the following violations: raids of houses and arrest of women and men, cutting of internet and telephone lines, the use of live ammunition on protestors, and the violent beating of protestors and the targeting of women. The leaders of Forces of Freedom and Change, including lawyer Taha Othman, Hamza Farouk and Sherif Mohamed Aly were arrested on 4 November after they finished meeting with a UN representative. On 7 November 2021, more than 90 teachers were arrested by the Sudanese military including 48 women teachers. They were arrested after the Teachers’ Committee conducted a demonstration rejecting the coup. The arrested teachers reported the use of violence and beatings by the police and the joint forces. This resulted in one teacher having a miscarriage, while the police broke the legs of two other teachers, including Rihab Hassan. The Doctors Committee reported several injuries among teacher protesters. The teachers were released after spending 5 days in detention in inhumane conditions. Upon their release they were forced to sign declarations stating that they would stop participating in any protests or any political activity.

The number of people killed in Sudan since the beginng of the military coup has reached 40, while more than 500 people have been injured. During the protests on 13 November 2021, more than 215 people were injured and 7 were killed. Sudanese security forces arrested 140 protesters on 13 November 2021 in different areas in Khartoum. Among them 10 children were detained in Omdurman, whom the police refused to release on bail. During the protest on 17 November 2021, approximately 150 people were injured, although the actual numbers could not be confirmed due to the communication shutdown.

We the undersigned groups call on:

The Sudanese government to immediately release detained women protesters and WHRDs and provide health services to those injured;

The Sudanese government to immediately end the targeting of WHRDs, women’s rights groups and women protesters and protect the rights of WHRDs to advocate and promote women and human rights;

The United Nations Security Council to take action to ensure protection of women in conflict areas and urge the parties involved in the Juba peace agreement to comply with the provisions of the agreement related to the UNSC No. 1325, including ensuring effective, meaningful and genuine participation of WHRDs, women activists and women peacebuilders in the peace agreement;

The newly appointed expert on Sudan Adama Dieng to conduct an immediate investigation of the violations and gender based violence against women protesters and WHRDs, and engage in inclusive and wide consultations with civil society including women human rights defenders; 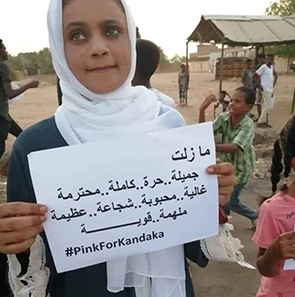