Joint Letter - India: Request for your immediate intervention against the illegal and forceful land acquisition and criminalisation of human rights defenders in Jagatsinghpur District, Odisha, India

Request for your immediate intervention against the illegal and forceful land acquisition and criminalisation of human rights defenders in Jagatsinghpur District, Odisha, India

We, the undersigned human rights organisations are writing to express our grave concern regarding ongoing numerous violations of human and environmental rights linked to the illegal handover of people’s land in several villages in Jagatsinghpur District, Odisha State, to JSW Utkal Steel Ltd. (JUSL).

Since 2005, when land was forcibly acquired for the now abandoned POSCO project, local communities have been facing eviction, loss of livelihood, and criminalisation. POSCO, a South Korean corporation, had planned to construct a steel plant on community land, in, what was at the time, the largest foreign investment in India. The proposed project sparked resistance from the communities including the passing of several village assembly (Gram Sabha) resolutions against environmental destruction and the illegal acquisition of their land and community forest resources and drew international condemnation, including from eight UN Mandate holders.1

After a sustained struggle by the community for many years, POSCO finally withdrew in March 2017. However, instead of returning the land to the villagers, the government of Odisha handed over the community land to Indian steel major, JUSL in September 2018, to set up steel and cement plants, a power plant and a port. JSW Steel Limited is part of the Sajjan Jindal controlled JSW Group. It is estimated that, if implemented, the project would displace up to 40,000 people from their land and livelihoods, impinge upon their human rights to food, water, work, health, adequate housing, healthy environment and other economic and social rights, and will have disastrous effects on the environment.2

The State of Odisha has responded with severe repression to the protests. The violence and criminalization against members of the Anti-Jindal and Anti-POSCO movement has terrorized the communities that have mobilized in opposition to the project. Women have always been at the forefront of the resistance, and many of them, including children and elderly people, were injured while protecting their villages and lands. Reports suggest that 24 police platoons (700 police personnel) deployed at village entry points and in the vicinity, have been hindering the freevmovement of villagers and their access to agricultural fields and betel vineyards, and restricting supplies of emergency goods.

We regret to learn that the intended projects have been allowed to proceed without adhering to the due procedure listed in the Environmental Impact Assessment (EIA) Notification, 2006, and without giving adequate attention to the rights and claims of the affected villagers under the Scheduled Tribes and Other Traditional Forest Dwellers (Recognition of Forest Rights) Act, 2006 (FRA, 2006). As many ofthe villagers belong to the Scheduled castes (Dalits), the alleged incidents have also led to several violations of the Scheduled Castes and Scheduled Tribes (Prevention of Atrocities) Act, 1989.

India is a state party to the International Covenant on Civil and Political Rights (ICCPR), which guarantees the right to liberty, protects individuals from arbitrary arrest or detention, and requires any deprivation of liberty to take place in accordance with procedures established by law. The targeting of human rights defenders and protesters for exercising their rights to freedom of expressionand peaceful association is a clear violation of international human rights law.

India is also a state party to the International Covenant on Economic, Social and Cultural Rights (ICESCR). By failing to respect the rights enshrined under the Covenant and refusing to settle the rights and claims of the affected communities under the Forest Rights Act (FRA), 2006, the government of India has breached its international obligation under the ICESCR and other related international standards.

Human rights defenders are entitled to specific protection by the State from arbitrary arrest under false charges, use of force, or deprivation of liberty under the United Nations General Assembly’s Declaration on Human Rights Defenders 1998, in whose favor India had voted unanimously with other nations. The UN Declaration for the Rights of Peasants and Other People Working in Rural Areas (UNDROP), in whose favor India voted, explicitly mentions in Article 6(2) that peasants shall not be subjected to arbitrary arrest. Article 15 (4) emphasizes the rights of peasants to determine their food and agricultural systems. Furthermore, Article 17 (1) outlines the individual and collective right to land( access to, use and manage land and water bodies, coastal seas, fisheries and pastures) and Article 17(4) emphasizes the rights of peasants to be protected against arbitrary and unlawful displacement from their land and prohibits the destruction of agricultural areas and expropriation of land.

Due to the gravity of the situation, we call on the government of India to:

We would like to thank you for your attention and request you to kindly keep us informed about theaction you intend to take on this matter.

International Federation for Human Rights (FIDH), in the framework of the Observatory for the Protection of Human Rights Defenders,

World Organisation Against Torture (OMCT), in the framework of the Observatory for the Protection ofHuman Rights Defenders,

The National Commission for Scheduled Castes, Government of India chairman-ncsc@nic.in;

UN Special Rapporteur on the Rights to Freedom of Peaceful Assembly and of Association: Clément Nyaletsossi Voule ohchr-freeassembly@un.org; 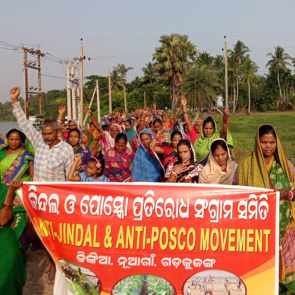