The report features a special investigation into the detention and ongoing military trial of 26 civilian labourers at Egypt’s Alexandria Shipyard, where French company Naval Group (majority-owned by the French state) is currently engaged in a contract with the Egyptian Ministry of Defense worth approximately €1 billion.

As increasing numbers of working class Egyptians descend into poverty, labour rights activism demanding safe working conditions, minimum wage and freedom of assembly is critical. The government of President Abdel Fattah al-Sisi has punished labour rights defenders with arrests, disappearances, beatings in detention, intimidation by State Security officers, withholding of salaries and benefits, mass firings and trials in military courts. Several activists who have participated in factory strikes since the 1960s told Front Line Defenders that in their lifetimes, they had never faced this level of violence and retribution against labour rights activism.

As the Egyptian Ministry of Defense – estimated to control more than half of the country’s economy – purchases more land, factories, hospitals and hotels, labour rights defenders occupy a particularly dangerous space in Egypt’s increasingly militarized economy. Organizing in any company or sector owned or operated by the military puts HRDs at increased and direct risk of prosecution in military courts.

French company Naval Group, majority-owned by the French state, is involved in a shipbuilding contract worth approximately €1 billion with the Egyptian Ministry of Defense, at an Alexandria factory owned and operated by the Egyptian military. Civilian shipyard workers, strike organisers, and activists at Alexandria Shipyard have been on trial in a military court since June 2016 following a peaceful strike for minimum wage, safety equipment, and bonuses.

Staff from the French company were present at the Shipyard during the strike, lockout, mass firings and ongoing trial of HRDs and workers. As the military trial progressed, French defense contracts with Egypt have increased to a value of €3 billion. 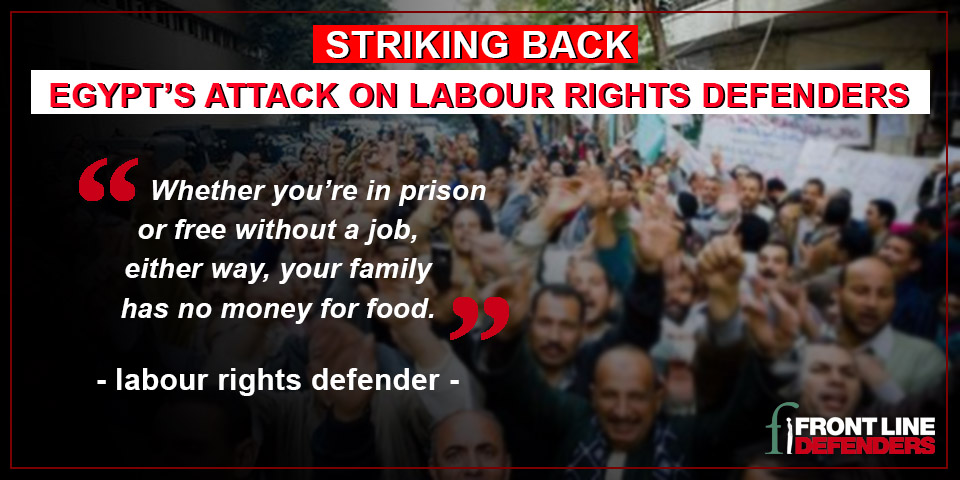 Front Line Defenders has conducted an extensive, nine-month investigation into Naval Group’s presence at the Alexandria Shipyard. While the shipyard is owned by the Egyptian Government, Naval Group has a clear responsibility under its own Code of Conduct, ILO standards, UN Guiding Principles on Business and Human Rights, and potentially the newly introduced French Duty of Vigilance law, to respect human rights in all its operations, including when operating through contractors.

Launching the report this morning at the CFDT headquarters in Paris, Front Line Defenders Protection Coordinator for Middle East and North Africa, Moataz El Fegiery, said: “Labour rights has become one of the most dangerous topics in the country for HRDs to research, report, and organize around. For decades it has been one of the country’s most powerful social mobilizers, and it is clear that the al-Sisi regime is terrified of the collective strength of workers, unions, and activists. In the past week alone, we’ve received reports of labour rights defenders summoned for interrogations and threatened with arrest.

"President Macron’s visit to Egypt this month is an opportunity for France to voice its strong support for human rights defenders, and demand an end to labour rights abuses committed by the Egyptian state and military.” - Moataz El Fegiery, MENA Protection Coordinator, Front Line Defenders