Irish NGO Front Line Defenders strongly condemns the detention of at least 58 human rights observers, including our Protection Coordinator Masha Chichtchenkova, this morning in Belarus following a raid at the offices of Viasna Human Rights Centre in Minsk.

At least 58 domestic and international human rights observers gathered for a training at Viasna at 12pm ahead of planned protests this afternoon. The demonstration was planned for 2pm, and Front Line Defenders Protection Coordinator Masha Chichtchenkova reported a large police presence on the main avenue of Minsk, noting “a pair of police officers was posted every thirty meters, with at least six large prisoner transport vans on site, seemingly preparing for a mass arrest.”

Front Line Defenders Protection Coordinator was present at today’s training, at which approximately 60 people were gathered in the Viasna offices, a small room on the first floor of a residential building. The organisers discussed safe protest monitoring and clarified that observers were not to directly participate in the protest. They informed volunteers that although the organisers had submitted the names of observers to the city hall in Minsk, authorities had declined to guarantee that peaceful, independent observers would not be targeted by security forces. Volunteers were given the option to leave due to increased security risks, but all registered observers elected to stay. 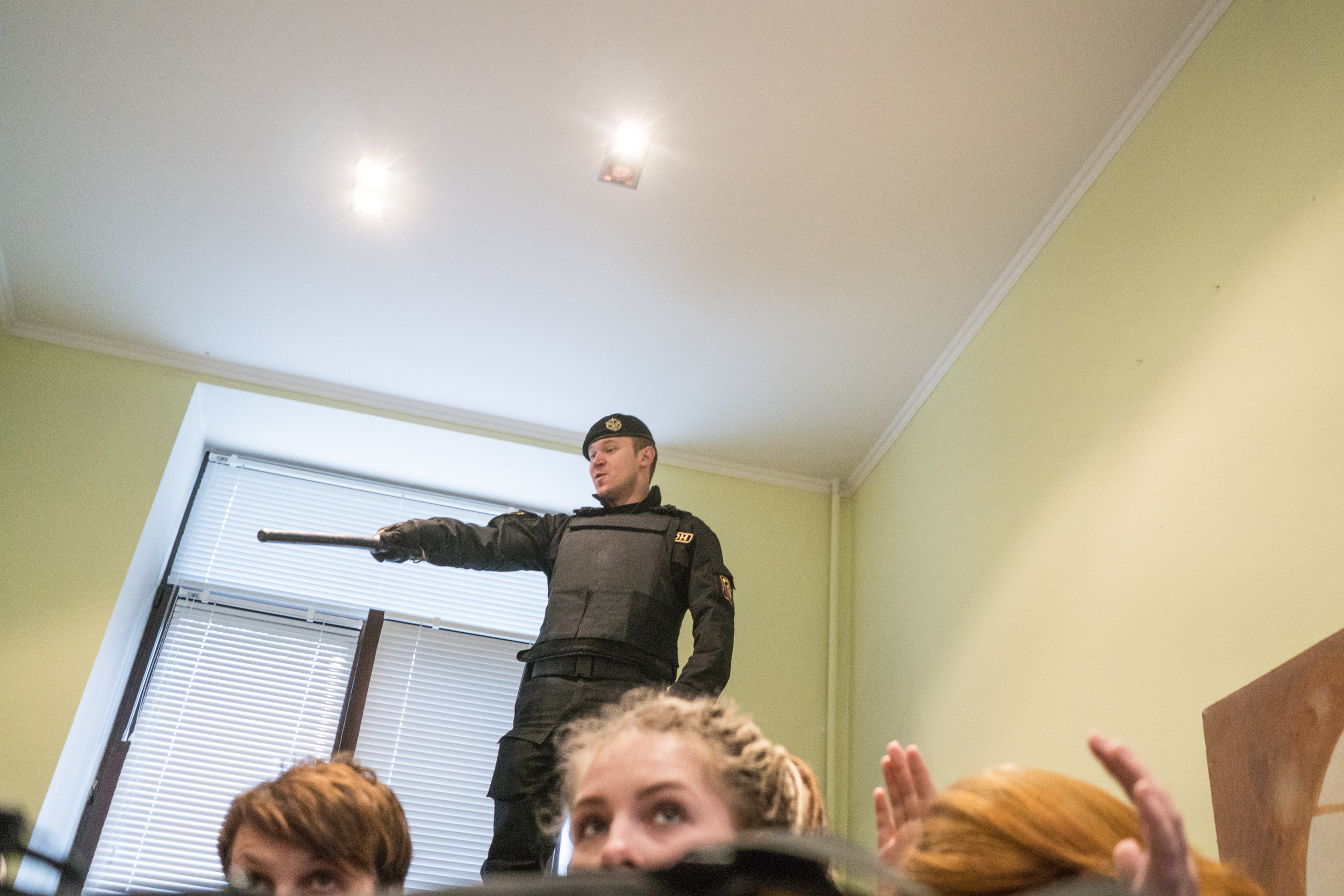 An hour into the training, approximately 15 members of the security forces, including officers from the Special Intervention Unit and plain clothes police, entered the room demanding those present put their hands in the air, remain still and declare their names. One officer began forcing a camera close to each participants face and demanding that they declare their names individually. After several minutes on the floor having their photos taken, the human rights observers were crowded into a bus waiting outside with at least a dozen more police officers. Those present report being held in a very cramped space on the bus, with one HRD remarking, “the security forces clearly didn’t expect to have to take so many of us into detention. There was not enough room on the bus for all of us, it was very crowded.”

The human rights observers were taken to Pervomaisky district police station, where officers searched the clothes, bags, shoes, and personal belongings of detainees. All present were asked for passports and personal information, which was recorded by the security.

Front Line Defenders Protection Coordinator Masha Chichtchenkova reported that when the bus she was transported on arrived to the Pervomaisky police station, another group of at least 30 activists was already in detention, lined up with their hands pressed against a wall. 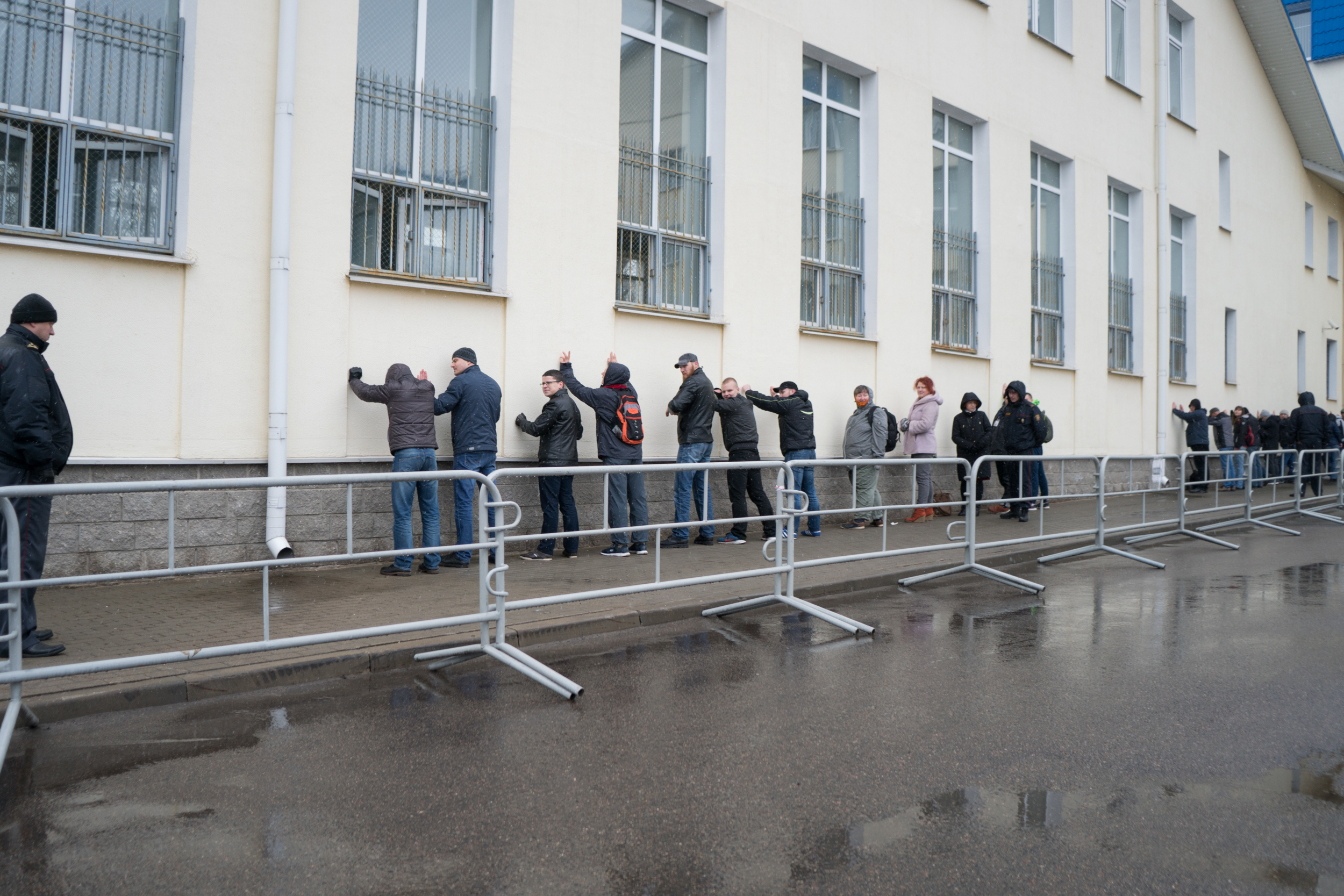 All human rights observers detained in the raid on Viasna’s offices were released approximately two and a half hours after the raid, but human rights defenders in Belarus report that several hundreds of demonstrators and activists have been detained today. It remains unclear how many have been released.

Just after her release, Chichtchenkova explained:

The past few months have seen a new wave of protest action bringing people not traditionally involved in activism out to the streets. This is part of the government’s motivation for the crackdown; they want to suppress a movement the likes of which we haven’t seen since 2011. Ahead of the protests, there were hundreds of preventative arrests targeting opposition leaders, human rights defenders, and civil society leaders known for organising protests.

Human rights observers were detained to intimidate, prevent and silence those who monitor protests in Belarus. We will continue to monitor repressions inside the country, and we will keep supporting HRDs in Belarus. - Andrew Anderson, Executive Director, Front Line Defenders

Front Line Defenders strongly condemns the mass detentions and crackdown on civil society and human rights defenders in Belarus today. We call on the authorities to immediately release those detained for peacefully exercising their right to freedom of assembly, and reiterate our going support for and solidarity with human rights defenders in Belarus.

For more information or to speak with Front Line Defenders, please contact: