Today is International Day of the World’s Indigenous Peoples

Here are the activists at risk for defending them.

When members of Juan Francisco Martínez’s community found his body in January 2015, his body bore marks of torture. One of his hands was still tied with what appeared to be laces from military boots.

Juan, a human rights defender and indigenous Lenca man from Honduras, was found on 5 January 2015 in the village of Tapuyman in the Santa Elena Municipality of La Paz, Honduras. He had been killed the day before.

For more than a year prior to his murder, Juan and his family received death threats related to his activism.

Juan was a member of the Lenca Independent Movement of La Paz (MILPAH). He fought for his community’s rights to water and land. Human rights defenders from MILPAH — like defenders of indigenous peoples’ rights around the world — face extreme risks from governments, corporations, and other non-state actors, including violent armed groups. Members of MILPAH, including 2016 Front Line Defenders Award Winner Ana Mirian Romero, have been threatened and assaulted. Others have been killed.

Indigenous peoples’ rights defenders work in some of the most dangerous conditions in the world, and are often removed from urban networks of support and protection.

Their battle for rights is intimately tied to their food and water security, and their struggles often intersect with fights for land and environmental rights.

To mark International Day of the World’s Indigenous Peoples on 9 August, Front Line Defenders is honouring the work of 4 human rights defenders who face immense risks advocating on behalf of their own indigenous communities.

Gloria Ushigua is Coordinator of the Sápara women’s organisation Ashiñwaka, which defends Sápara people’s ancestral land and environmental rights in the province of Pastaza, Ecuador. Since 2010, Gloria has been invested in the defence of her community in Llachama Cocha, primarily against private and State-owned companies seeking to exploit oil deposits in Sápara territory. Referring to drastic reduction in number of Sápara people in past 15 years, Gloria says:

“I am afraid that we will cease to exist.”

As a result of her work in defense of her people, Gloria has been threatened, intimidated, judicially harassed, discredited on national television by high public officials and assaulted by law enforcement officers, along with other members of her family. 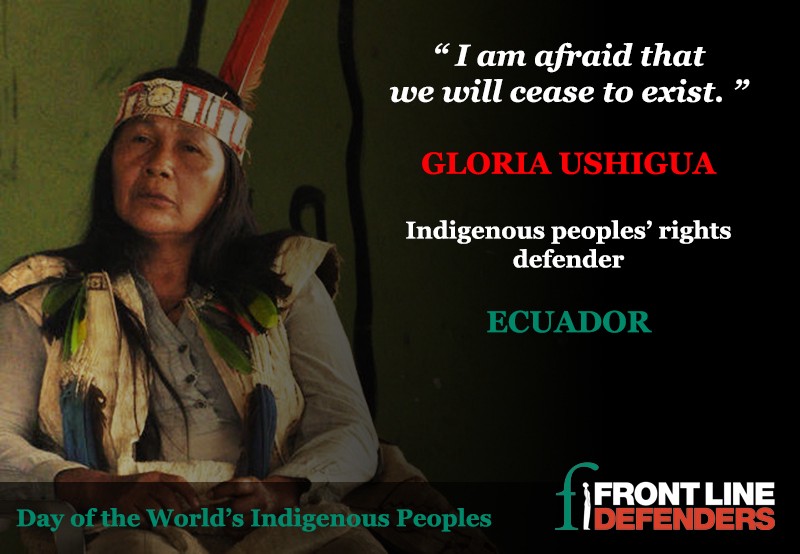 Melissa Comiso is an indigenous peoples’ rights defender and educator in the Philippines. She is the Literacy and Numeracy Program Coordinator of the organisation Rural Missionaries of the Philippines in Northern Minanao Sub-Region (RMP-NMR). Her organisation supports peasants’ fight for justice and access to common goods, and for agrarian reform through the redistribution of land. She and her colleagues are fighting to improve equality for landowners in the Northern Mindanao Sub-Region. Melissa Comiso is also active campaigning for the withdrawal of the military from the northern Minanao communities.

“You can kill us indigenous peoples in variety of ways. Eject us from our land and we lose our identity. We lose our resources to survive. And if we will not fight, we will continue to breathe, but we are dead as people.”

Indigenous peoples’ defenders in Mindanao have faced repeated targeting, including killings and harassment. There have been 3 other recent attacks on indigenous rights defenders in Melissa’s organisation this year. 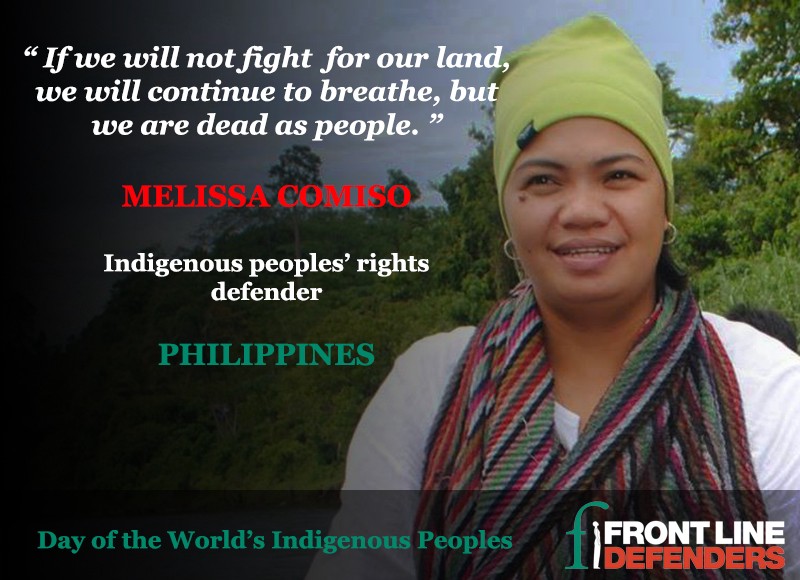 Mohamed Ed-Daoudy (better known as Moha Tawja) is an indigenous rights defender from Imider, a remote village in south west Morocco. Most people in Imider are Amazighs (Berbers), an ethnic group that since Morocco’s independence has been struggling for the recognition of their social and cultural rights. Moha is one of the leading members of “Movement on the Road ‘96”, a social movement against a silver mine — owned by the Moroccan royal family — that was draining the water reserve of Imider. In 2011, Moha and the other Imider residents set up a protest camp around a key water valve, to prevent the mine from decimating their water supply. In 2015, Moha told Al Jazeera:

“If we had independent studies that can prove the effect of the mine on Imider, I don’t think we would need to protest.”

Since the beginning of the protest, they have suffered threats, intimidations, arbitrary arrests and lawsuits brought by the mining company. Dozens of people have been arrested, and families of human rights defenders have been threatened in an attempt to stop the movement. 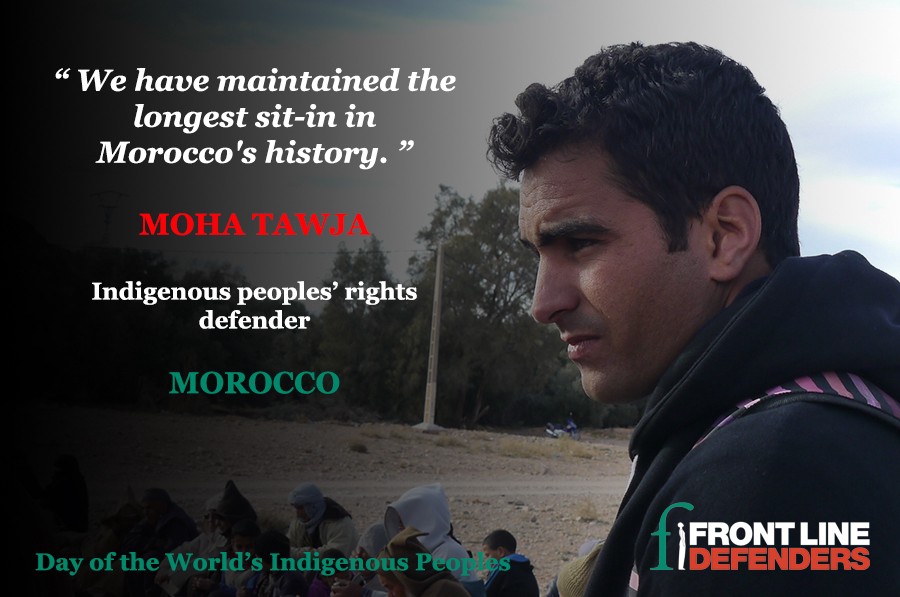 Lottie Cunningham Wren is a lawyer and founder of the Center for Justice and Human Rights of the Atlantic Coast of Nicaragua. She is working in 124 remote communities to help indigenous peoples exercise their legal rights to protect natural resources. Lottie was an expert witness in the Awas Tingni vs. Nicaragua case, before the Inter-American Court of Human Rights. This case resulted in a tremendous land rights victory for indigenous peoples throughout the Americas. Lottie’s goal now is to implement that decision and help communities on the Atlantic Coast of Nicaragua demarcate and title their lands.

“Without our land, our peoples cease to exist”, “What we need with most urgency is the security that the law will protect our right to our ancestral lands, we fear that there will be an ethnocide otherwise.” 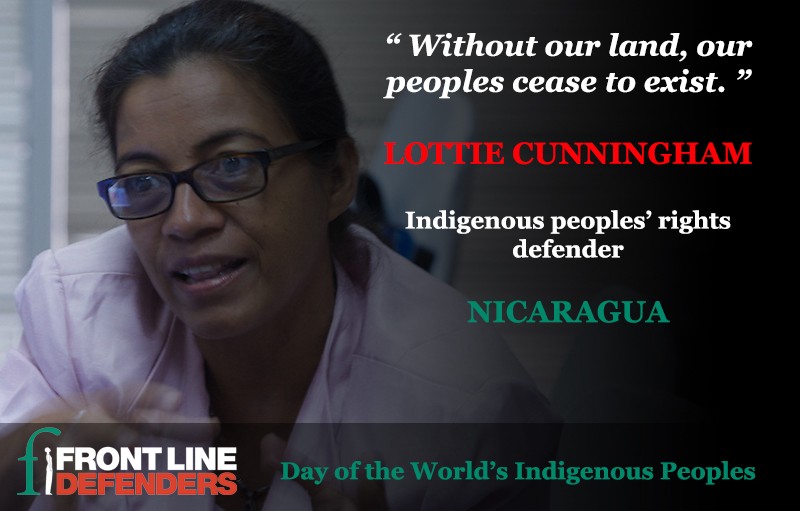 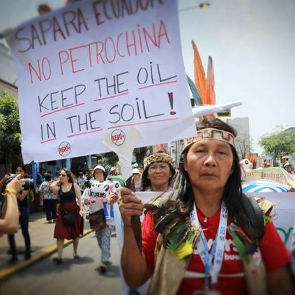