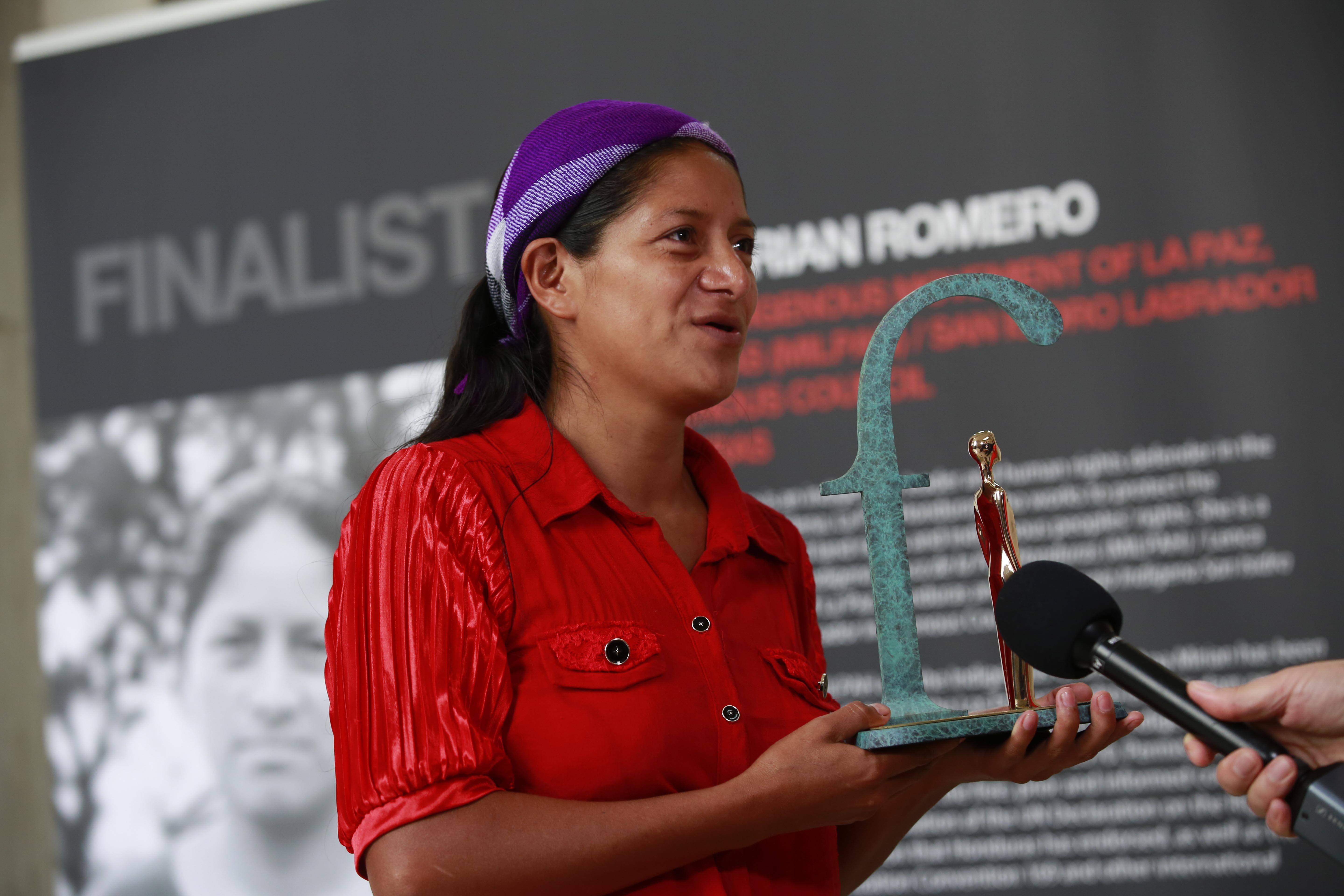 In nearly a decade of defending her community’s land and rivers from corporate destruction, Honduran woman Ms. Ana Mirian Romero has endured armed raids, physical assault, death threats, and personal defamation campaigns. Her home was burned down in January and her children have been forced to leave school because of repeated harassment.

“Ana Mirian, her husband and their children endure armed attacks, threats, and harassment as she fights to realise their land rights, as indigenous peoples, while also protecting the local environment which ultimately has an impact globally. Environmental defenders such as Ana put their lives at risk to protect the environment not only for the current generation but for future generations.   Despite the life-threatening risks to human rights defenders in Honduras, Ana has persevered. The Front  Line Defenders award is recognition of the work that Ana and so many women like her undertake for the greater common good  and I am  honoured to confer the award on her here today,” said Mrs. Robinson, speaking at the award ceremony at Dublin’s City Hall.

Ana Mirian is a Lenca woman and a member of both Movimiento Indígena Lenca de La Paz Honduras, MILPAH, (Lenca Indigenous Movement of La Paz) and Consejo Indígena San Isidro Labrador (San Isidro Labrador Indigenous Council). She has fought for legal recognition of her  indigenous peoples' land, and against the installation of the Los Encinos hydro-electric dam which would destroy their livelihoods. As a result, she, her family and the other members of MILPAH are now targets of repeated attacks by police, military and armed civilians connected to the hydroelectric company.

Accepting the Front Line Defenders Award today in Dublin, Ana Mirian called on supporters of human rights defenders to advocate for the protection of indigenous communities worldwide, who face extreme personal risks working against corporate destruction of their land. She said:

“We don't fight. We defend. We defend the river because it sustains us – our food, our drinking water, our crops, our animals. We are persecuted and threatened for this, but we do it for our children's future. We don't know what more will happen to us, but we are willing and ready to defend what we have."

Presented annually, the Front Line Defenders Award honours the work of human rights defenders who courageously make an outstanding contribution to the promotion and protection of human rights of their communities, often at great personal risk. 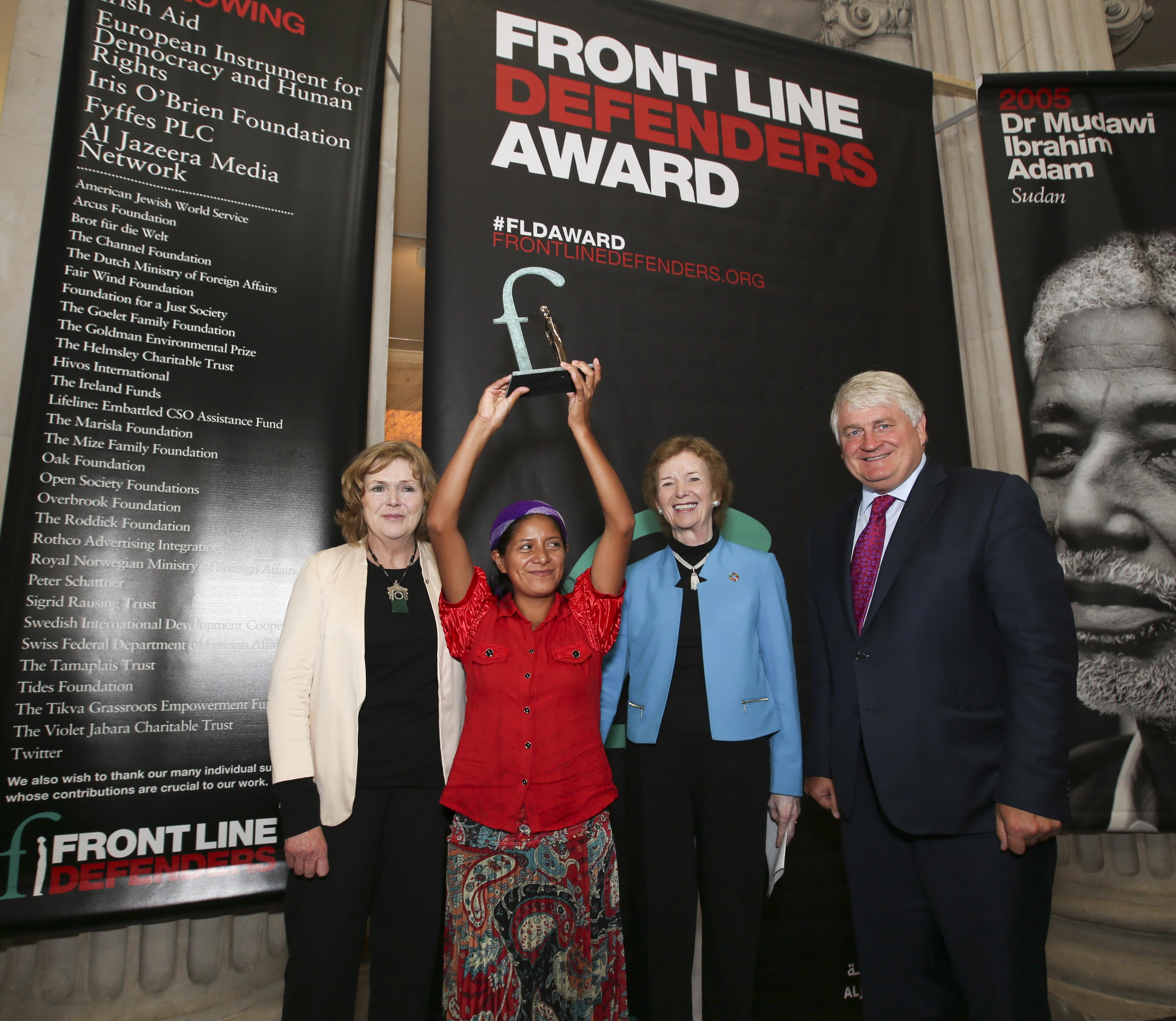 “This year, we were honoured to promote the incredible work of six human rights defenders around the world, who were selected as finalists for the award. Each demonstrates daily a commitment to their communities’ struggles that has been unbroken by arrests, harassments, and ongoing attempts to intimidate them,” said Ms. Mary Lawlor, Executive Director of Front Line Defenders.

For further information or arrange an interview with Ana Mirian Romero or Mary Lawlor, please contact:

Ana Mirian and her husband Rosalio Vasquez Pineda have also been active in opposing the installation of the Los Encinos hydro-electric dam (Hidroelétrica Los Encinos), owned by the Los Encinos S. de R.L., on the Chinacla river. In 2010 they filed a lawsuit for the recognition of the indigenous peoples' ancestral lands in response to the municipality granting a concession to the company Los Encinos S. de R.L. to construct a hydroelectric dam project on the Chinacla River. Permission to build the dam was granted without the free, prior and informed consent of the affected community. This is a blatant violation of the UN Declaration on the Rights of Indigenous Peoples, which Honduras has endorsed, as well as the International Labour Organization Convention 169 and other international jurisprudence. Amongst other concerns, the indigenous peoples have serious concerns about the negative impact of the project on their access to water.

Ana Mirian Romero's leadership in defence of the ancestral lands has resulted in her and her family being the target of serious and repeated attacks by the police, the military and armed civilians, all of whom represent the interests of the hydroelectric company. On 9 May 2016 the human rights defender and her children received death threats and were intimidated by four men in their home in the municipality of Santa Elena, department of La Paz. On 29 January 2016 her home was burned down and her children have been forced to leave school because of repeated harassment. 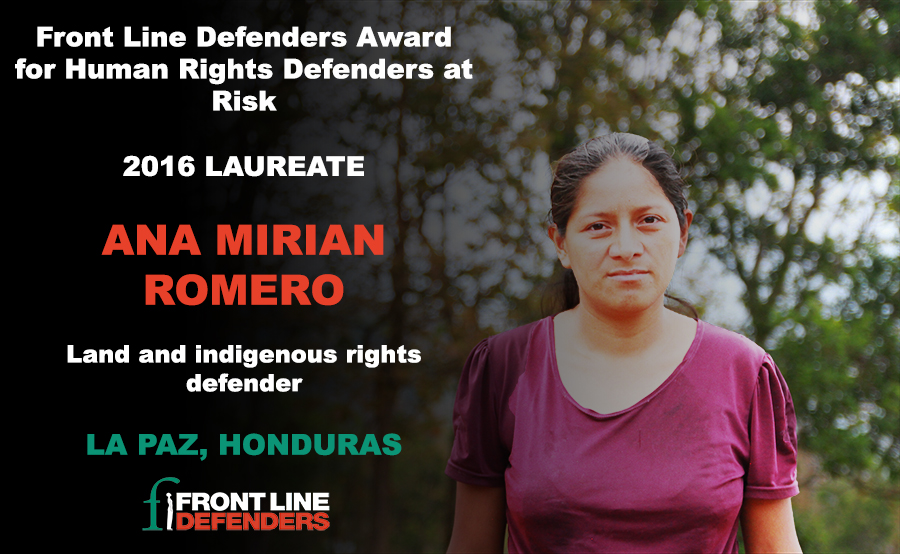