About Mursal Ayar
Status:
Abducted
About the situation 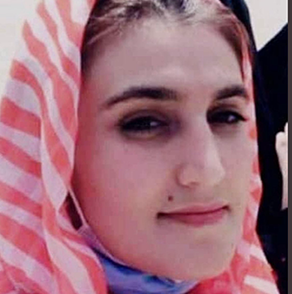 Mursal Ayar is a woman human rights defender and a journalist working with CNN. She has also been advocating for women rights and has participated in several protests  in Kabul.

Zahra Mohammadi is a member of the Afghan Women’s Solidarity Team, which had organized an indoor protest to demand the release of Tamana Zaryab Paryani and Parwana Ibrahimkhel on 2 February 2022. A dentist by profession, she has been peacefully advocating for women’s rights to work and to education, since the takeover of Kabul by the Taliban in August 2021. Even in the face of violent suppression of human rights, freedom of expression and dissent, she participated in many peaceful protests in Kabul, demanding equal rights for women.

Mursal Ayar is a woman human rights defender and a journalist working with CNN. She has also been advocating for women rights and has participated in several protests  in Kabul.

The women human rights defenders are facing reprisals for their peaceful resistance against the Taliban. At the recently held Oslo Summit, women representatives from Afghanistan had raised serious concerns regarding the deteriorating situation for women’s rights in the country and the grave reprisals faced by those who spoke out against the Taliban. They had also expressed outrage at the arrest and disappearance of Tamana Zaryab Paryani and Parwana Ibrahimkhel and had asked for their immediate release.

On 23 January 2022, Taliban spokesperson Zabihullah Mujahid claimed that the Taliban have the right to arrest and detain dissidents. Since their takeover of Kabul in August 2021, the Taliban have engaged in serious human rights abuses including arrests, detention and torture of human rights defenders, conducting raids on civil society organizations, banning the rights of women to education and work, beating protestors, and reportedly torturing or killing activists, journalists, minorities, and former government officials.

Front Line Defenders is deeply concerned about the abduction and subsequent disappearance of women human rights defenders Zahra Mohammadi and Mursal Ayar. It believes that the women human rights defenders are being attacked for defending the rights of women in Afghanistan and participating in peaceful protests against the Taliban. Front Line Defenders is also concerned about the continued disappearance of Parwana Ibrahimkhel, Tamana Zaryab Paryani and her three sisters, who were abducted from their homes on 19 January 2022.