About Shujaat Bukhari
Status:
Killed
About the situation

On 14 June 2018, Kashmir journalist and human rights defender Shujaat Bukhari was killed after being shot multiple times as he was leaving his office in Srinagar, Kashmir. His two security guards were also killed in the attack. 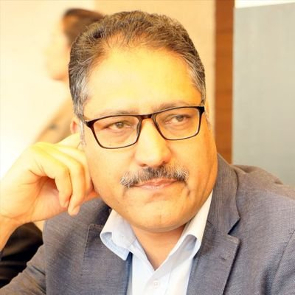 Shujaat Bukhari worked for justice and peace in the Kashmir Valley, a historically violent region in the Indian state of Jammu and Kashmir. He was a prominent journalist and editor-in-chief of the English-language daily newspaper, Rising Kashmir. Shujaat Bukhari was instrumental in organising peace conferences in Kashmir and participated in relationship building initiatives between India and Pakistan. He was a moderate voice in the region who encouraged non-violent dialogue between the two countries. Shujaat Bukhari had long been a target because of his human rights work. In 2006 he was given police protection after unidentified armed assailants tried to abduct him.

On 14 June 2018, Kashmir journalist and human rights defender Shujaat Bukhari was killed after being shot multiple times as he was leaving his office in Srinagar, Kashmir. His two security guards were also killed in the attack.

Shujaat Bukhari was shot as he was getting into his car after leaving his office at 7.30pm on 14 June. He was shot by two men who were wearing helmets and riding with two other men on two motorcycles. The men fired indiscriminately, instantly killing Shujaat Bukhari and one of his security guards. The second security guard later died in hospital.

On 15 June, Srinagar Police released photos of three suspects they had obtained from CCTV footage. One of the suspects was later arrested. Shujaat Bukhari’s killing came just two days before the Indian government’s unilateral ceasefire with militants, which was declared in May for the holy month of Ramzan, was scheduled to end.

On 14 June 2018, the UN released its first ever report on the situation of human rights in Kashmir, calling for an inquiry in to alleged human rights abuses by both India and Pakistan. Shujaat Bukhari tweeted about the report hours before he was killed.

Front Line Defenders strongly condemns the killing of human rights defender Shujaat Bukhari, which it believes is solely motivated by his peaceful and legitimate work on behalf of human rights, and calls on the Indian authorities to ensure that the perpetrators be brought to justice.

1. Ensure that the ongoing investigation into the killing of Shujaat Bukhari be thorough and impartial, with a view to bringing all those responsible to justice in accordance with international standards;

2. Guarantee in all circumstances that all human rights defenders in India are able to carry out their legitimate human rights activities without fear of reprisals and free of all restrictions.