About Seyoum Teshome
Status:
Released
About the situation 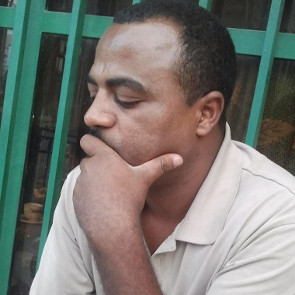 Seyoum Teshome is a lecturer, writer, blogger and frequent contributor to international media coverage of Ethiopian affairs. His blog, EthioThinkTank, discusses current issues, monitors the human rights situation in Oromia, and often holds the Government to account on human rights violations, especially following its crackdowns on protests in the Oromia and Amhara regions. On 21 August 2016, Seyoum Teshome contributed to a New York Times article, in which he stated in reference to Ethiopia: “We are living in a dictatorial state, a totalitarian state”. This comment was in relation to the marathoner, Feyisa Lilesa, who made a gesture of protest at the 2016 Olympics.

On 1 October 2016, Mr Seyoum Teshome was arrested at his home on the campus of Ambo University in Woliso, over 100 kilometres outside of Addis Ababa. It is reported that police forces arrested him, searched his residence, and took his computer, before bringing him to an unknown location.

Police forces entered Seyoum Teshome’s home without a warrant on 1 October 2016, confiscating his computer and several hard copies of articles he was working on. After his arrest, he was brought to an unknown location where he remains without access to his family or legal representation. No formal charges have thus far been filed against Seyoum Teshome.

The arrest of Seyoum Teshome is part of a larger crackdown on voices critical of the Ethiopian government and their handling of the protests in the Oromia and Amhara regions. Since 2014, when the Government released their “Integrated Development Master Plan” to expand the capital, Addis Ababa, into the Oromia region, there has been widespread outcry as the plan would remove members of the Oromo community, including farmers, from their land without recourse.

Front Line Defenders expresses concern at the arrest of Seyoum Teshome as it believes it is motivated by his peaceful and legitimate activities in the defence of human rights and freedom of expression in Ethiopia.

Front Line Defenders urges the authorities in Ethiopia to:

2. Ensure that the treatment of Seyoum Teshome, while in detention, adheres to the conditions set out in the ‘Body of Principles for the Protection of All Persons under Any Form of Detention or Imprisonment', adopted by UN General Assembly resolution 43/173 of 9 December 1988;

3. Inform the family and lawyer of Seyoum Teshome of the place of his detention, and allow them immediate and unfettered access to him;

4. Return the items confiscated during the raid, as they are manifestly not linked to any criminal activity;

5. Guarantee in all circumstances that all human rights defenders in Ethiopia are able to carry out their legitimate human rights activities without fear of reprisals and free of all restrictions.